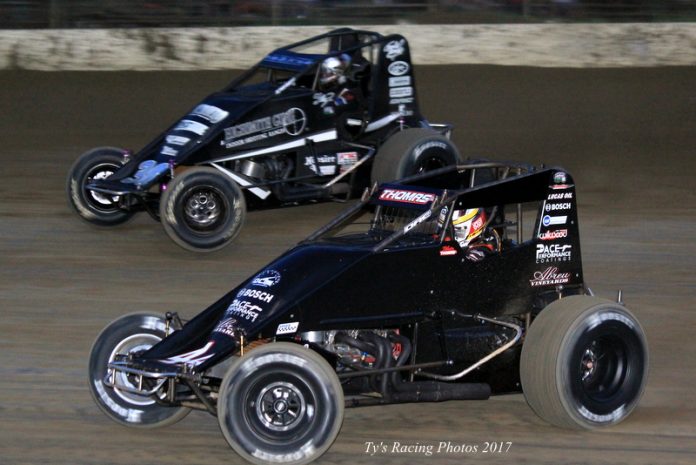 BECHTELSVILLE, PA – If you have never seen the USAC non-wing sprint cars at Grandview, block the date of Thursday night, June 14 and plan to attend the Thunder on the Hill Racing Series event at the Grandview Speedway. The always exciting one-third mile high banked oval is the perfect venue for the exciting and well known USAC AMSOIL National Sprint Car Series. The Eastern Storm, now in its’ twelfth season, and as tradition, will open at the Grandview Speedway.

The USAC non-wing sprints with a 410 motor have a reputation for wheel-banging, rooster tails and slide jobs and its’ all just part of the show. At Grandview Speedway, the USAC drivers are most comfortable grazing the outside boiler plate with their rear bumper taking the longest route around the track.

For all of the reasons mentioned, this event is one of the hottest tickets of the NAPA Auto Parts Thunder on the Hill Racing Series. Along with the nationally known USAC Stars, the local favorites of the 358 Modifieds will be on the racing program. Both divisions will compete in qualifying leading up to the 40 lap $6,000 to win Jesse Hockett USAC Non-Wing Classic and a 30 lap, $3,000 to win modified main event.

It all started In 2007 when Thunder on the Hill special events promoter, Bob Miller and the Rogers Family, brought the nation’s longest touring Sprint Car group back to Pennsylvania after a nearly 30-year absence from the region.

“I vividly remember USAC being such an integral part of the Reading Fairgrounds history,” Miller recollects. “In some ways, my love of Reading made me so passionate about bringing USAC back to the east coast and specifically back to Berks County at Grandview.”


USAC came back in full force and remains one of the must-see events of the racing season.

Heading into the 12th Eastern Storm, the Bechtelsville, PA dirt track opens the tour with the Jesse Hockett Classic, a 40 lap battle for the non-wing 410 sprint cars joined by the 358 modifieds in this Double Header. Gates open at 5 PM with race time set or 7:30 PM. Grandview and Thunder on the Hill are the only facility to have held a USAC event in every year of Eastern Storm history. Defending winner of this event on the hill is Brady Bacon.

York Haven, PA’s Susquehanna Speedway lands on the schedule for the sixth consecutive year, on Sunday, June 17. For the first time, United States Auto Club drivers head to Bridgeport Speedway on Monday, June 18 and the Storm concludes on Tuesday, June 19 at Weedsport Speedway.

Past Eastern Storm winners like Robert Ballou – who swept all three 2015 events, Brady Bacon – who holds wins at Grandview Speedway and Port Royal Speedway, Chad Boespflug, and Chase Stockon are expected for competition.

The Eastern Storm kicks off on Thursday, June 14 with the Jesse Hockett Classic – dedicated to the memory of the 2009 Grandview race winner. On that night, Hockett thrilled the crowd winning both feature events in the same night.

Advance tickets for the Grandview Speedway USAC/358 Modified event are available by calling 443-513-4456. Callers are required to leave their name, phone number, and the number of tickets requested. We will call you back only if we have questions. Callers may then pick-up and pay for their tickets at the Grandview Speedway’s Will-Call Window after 4 PM. Advance ticket holders may enter the grandstands at 4:30 PM – a full 30 minutes before tickets go on sale to the public. Advance tickets must be ordered prior to race day.

Tickets are $30 for adults, $10 children 6 to 11 and kids five and under will be admitted for free. Pit admission is $35 and a license is not required.

Grandview Speedway is a high-banked one-third mile clay oval, celebrating their 56th Anniversary season in 2018. The facility offers free parking, quality food at reasonable prices (be sure to try the french fries), a program book, Grandview Speedway and Thunder on the Hill race wear and great viewing from every seat in the house. Race fans may take part in the Inside/Out promotion, where you can sign up (no charge) to watch warm-ups from inside turn four. Race fans are also invited to victory lane following the racing program and, race fans may enter the pits after the races to meet the drivers. Be ready to enjoy the spine-tingling fireworks salute on the feature event parade lap. For more information visit: www.thunderonthehillracingseries.com