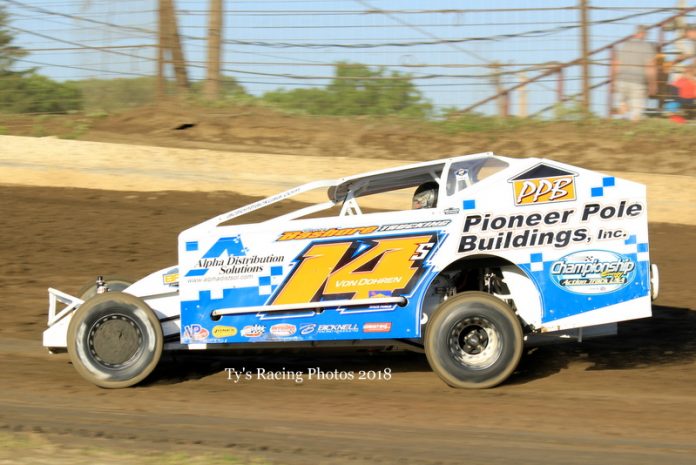 Von Dohren’s 103rd career win didn’t come easily for the defending and ten-time point champion. The Oley lead foot had to hold off the continuous challenges of Jared Umbenhauer, who returned with a back-up car after his primary one was destroyed by last week’s fire. Von Dohren had to weave in and out of lap traffic once he merged ahead on the 20th lap.

Von Dohren credited crew chief Jason Bashore and all the pit crew members plus sponsors for their continuous support and was thankful that the breaks were in his favor for a change.

Bobby Gunther-Walsh set the pace for five laps before the yellow was out for debris along the homestretch. When action resumed Danny Erb, who returned after missing a few weeks, charged to the front of the pack leaving Gunther-Walsh, Mark Kratz, Umbenhauer and Doug Manmiller dice for positions.

Manmiller overtook second on the seventh lap to pressure Erb, who stuck to the high groove while Manmiller tried to duck underneath him.

While Erb and Manmiller battled for the lead this allowed Umbenhauer to reel the pair in to make it a three-way battle for first.

The lead changed for the third time on the 18th lap when Umbenhauer, who overtook the runner up spot on lap 16, proceeded to charge into the lead, but Erb stayed with him trying to regain control.

The running order behind Umbenhauer by this time now consisted of Erb, Von Dohren, Manmiller and Duane Howard.

Umbenhauer went high coming off of turn four on the 20th lap and Von Dohren took advance of the situation and went through the middle to put the Nick Gatto powered No. 1C at the head of the class.

Lapped traffic came into the picture as the front runners had to use heads up driving to maneuver past them. This allowed last week’s feature winner Jeff Strunk to close the distance and made it a three-way race for the top spot.

Von Dohren hit all the right marks to proceed into victory lane for the win. Following closely across the line were Umbenhauer, Strunk, Manmiller and Howard.

Walsh, Umbenhauer and Kyle Weiss were the heat winners. Brett Kressley had trouble in the first heat, but was able to pull off the consi win.

In the 25-lap ASCAR Late Model feature Wayne Pfeil, out of action last week due to engine problems, started on the pole and led every lap of the event.

The red was thrown on the sixth lap after Chuck Schutz, last week’s winner, clipped the inside fourth turn guard rail and shot up into the fourth turn wall with hard impact. He was uninjured, but the car sustained heavy damage. Pfeil maintained his lead on the restart and within no time had a healthy lead built up.

Positions behind Pfeil were constantly changing, but he never faltered to go on to claim his lucky 13th career win. Finishing second was Danny Snyder followed by Kyle Merkel, Drew Weisser and Steve Todorow, already a feature winners this year.

Mike Mammana, returning to Sportsman action after sitting out much of last year due to an early injury, was the early pacesetter in the Sportsman main event with Andrew Kreis, Mark Kemmerer, Lilick and Kurt Bettler in pursuit.

Lilick moved into second on the 10th circuit in an effort to overtake the lead.

B.J. Joly stopped between the third and fourth turn for the 11th lap caution. Before action resumed, Jim Housworth, running a strong fifth dropped out of contention. Mammana continued to show the pace with Lilick making valiant efforts to pass him. Lilick made several attempts to get underneath Mammana, but was unsuccessful.

Lilick’s bid for first stuck on the 17th lap as when he was able to move. At the same time Louden Reimert followed through for second.

Lilick kept everyone behind him to go on to capture another win for his third career victory. Second went to Reimert followed by Kemmerer, Whitmoyer and Funk III.

Heats were won by Mammana, Kemmerer and Gary Wagner.

Next Saturday these same Sportsman drivers plus a host of others will compete in the Summer Splash 40-lap event along with the T.P.Trailers NASCAR 358 Modifieds and Late Models with action set to get underway at 7:30 p.m. The night will also include the Safety Net Sanctuary of Fleetwood Raffle Fundraiser. Fans are invited to support this animal charity by bringing dog and cat food to be deposited in special containers and purchase raffle tickets with many great prizes to be awarded.

Then on Sunday at 1 p.m. the Outlaw Enduros and Blast From the Past Vintage racers will be in action.