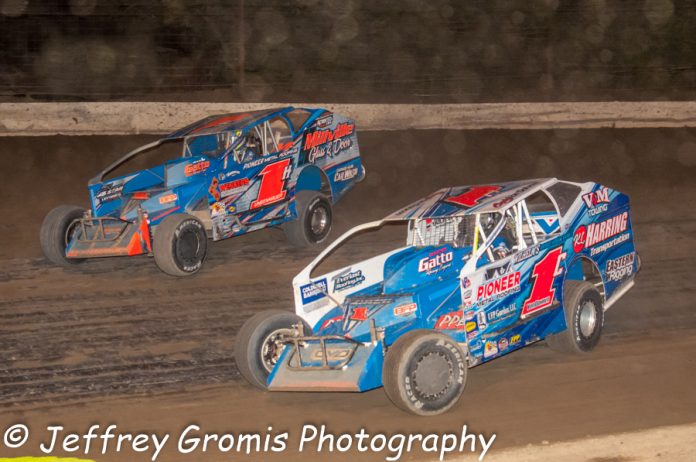 BECHTELSVILLE, PA – Craig Von Dohren collected his second T.P. Trailers 30-lap NASCAR Modified feature victory of the season by holding off the hard-charging run of Mike Gular, the current Mod point leader, who was closing in during the final stages through the aid of the lapped cars. The Saturday night win didn’t come easy for Von Dohren, the ten-time and defending champion since twice he went through the middle of lapped traffic. He commented in victory lane that he knew they were racing for positions on the track that was getting slick for them as well as the others in the final event of the night. Von Dohren also thanked his crew and many sponsors who he realizes he wouldn’t be where he is without them.

In the 25-lap NASCAR Sportsman feature Brad Arnold, who was a spectator last week when mechanical problems sidelined him from the feature, finally had Lady Luck on his side and claimed his second feature victory of the year.

Modified action saw Eric Biehn overtake Chris Gambler for the lead on the second lap to become the new pacesetter.

While Biehn showed the way around the 1/3-mile oval, Gambler and Ryan Grim put on quite a dual for second with Jared Umbenhauer, Ray Swinehart and Von Dohren in pursuit.

Once Grim moved into second and erased the margin Biehn built up, he ran the bottom lane in an attempt to pass Biehn, who chose the high lane to keep the lead.

Ron Kline stopped in the second turn to bring out the only race caution on the ninth lap. It was still Biehn first on the restart, but by this time, 12th-place starter Von Dohren was in the challenging position.

The 13th lap was a lucky one for Von Dohren when he motored his self-owned, Nick Gatto powered No. 1C into the number one spot.

Umbenhauer advanced to second on the 16th circuit and took chase after Von Dohren who had somewhat of a slight margin built up.

By the 20th lap, the front runners that consisted of Von Dohren, Umbenhauer, Gular, Biehn and Duane Howard encountered lapped traffic that were also racing for positions, but it hampered the progression of the frontrunners also.

Two times Von Dohren had some narrow misses with the slower traffic when he went through the middle, but managed to get through.

With five laps to go Gular cleared Umbenhauer and was off after Von Dohren hoping to grab the lead.

Von Dohren never gave up and went on to score his 104th career Saturday night career win trailed by Gular, Umbenhauer, Howard and Jeff Strunk, who both came on strong in the end.

Invader Sean Merkel, winner of the Late Model Firecracker 40 in 2015, wasted no time taking the early lead away from polesitter and opening night winner Snyder at the start of the event.

Merkel ran the high line and Snyder made several efforts to dive underneath him, but each attempt failed.

The lead changed the eighth time around when Snyder put the KAM Fuels No. 44 into first.

Behind Snyder the battle for positions was hot and heavy between Merkel, Schutz, Brian Shuey, making a rare appearance and Wayne Pfeil.

Merkel and Schutz diced for second many laps until Schutz got by and set sail after Snyder.

Mechanical problems continued to hinder Bryon Sipe who battled with Kyle Merkel for the sixth spot many laps until a broken axle and flat tire slowed his pace bringing out the yellow with 23 laps completed. Snyder was still first when action resumed with Schutz challenging, but Snyder kept him behind.

It seemed Schutz would gain ground on Snyder, but that quick he lost it.

Snyder kept all the competition behind him and went on to claim his 10th Grandview career win followed by Schutz, Pfeil, Merkel and Shuey.

Arnold, who chalked up his first 25-lap NASCAR Sportsman of the season May 5, 2018, finally had a change of luck when he pulled into the winner’s circle for the second time by a comfortable margin over runner-up Louden Reimert.

Kurt Bettler was the early leader after two tries to complete a lap, but the second time around Arnold put the No. 830 into tat the head of the pack.

Within no time Arnold had a sizeable lead while Kenny Bock, Bettler, Kyle Lilick and Reimert jockeyed for the remaining spots. Trying to break into the top five was Brad Brightbill.

Cale Ross spun in the fourth turn to regroup the pack on the 15th lap. Arnold maintained his pace on the restart, but four laps later Reimert put his bids in for first.

Nothing hampered Arnold for a change and he kept everyone behind him to chalk up his fourth career win. Chasing Arnold across the line were Reimert, Brightbill, Lilick and Mike Lisowski.

Heats were won by Andrew Kreis, Nathan Mohr and Arnold.

Coming up on Saturday, July 14th, 7:30 p.m. another exciting evening of NASCAR stock car racing on the high banks. Included in the Whelen Engineering sponsored tripleheader show will be the T.P.Trailers NASCAR 358 Modifieds, Sportsman and Late Models. Spectator gates open at 5 p.m.

The edge of your seat action is priced at just $15 for adults, FREE for youngsters under 12 and there is FREE parking on the speedway grounds. Check in at www.grandviewspeedway.com for more info, visit Facebook or telephone 610.754.7688.

Friday, July 20th, 6 p.m. is the first Friday night show of Outlaw Enduros and Blast from the Past Vintage Modifieds. Also included will be Super Mod 4×4 Trucks and Vintage Midgets. Pit admission is $30 while adults in the spectator area pay just $10.

COMING EVENTS AS OF JULY 8