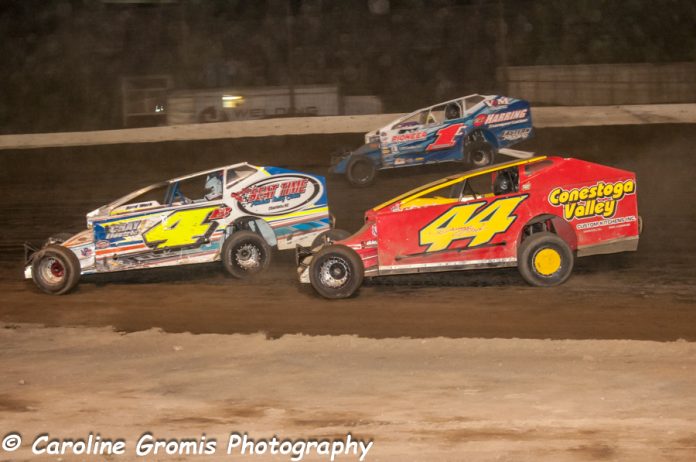 BECHTELSVILLE, PA – The action packed month of July auto racing at Grandview Speedway closes out on Saturday, July 28th, with the A.D.Moyer Lumber sponsored night of NASCAR tripleheader stock car racing that will include the T.P.Trailers 358 Modifieds, Sportsman and Late Models. Racing action gets underway at 7:30 p.m.

Current Modified point leader Mike Gular will be looking to pick up his first feature win of the season and take a giant step toward earning his first NASCAR and track titles. With just eight Saturday nights of racing remaining that offer events counting toward the lucrative titles each race becomes more important.

Close behind Gular are Craig Von Dohren and Jeff Strunk, each ten time champions at the Bechtelsville clay oval. And there are a long list of others hoping to improve their position in the standings including five time champion Duane Howard, Brett Kressley, Jared Umbenhauer, and a host of others.

In the Sportsman division sophomore racing talent Louden Reimert is looking to be able to hold on to his top spot in the standings by winning the 25-lap feature race. And Danny Snyder, who has lead the Late Model standings since opening night, is hoping to visit victory lane again.

More than seven dozen racing talents are expected to take part in the racing action on Saturday night and close out the month of July.

Kicking off August will be Checkered Flag Fan Club Night on Saturday, August 4th. Another tripleheader show of NASCAR stock car racing will be the attraction with the T.P.Trailers 358 Modifieds using the night to tune-up for the rich classic Pioneer Pole Buildings Forrest Rogers Memorial Classic set for Saturday, August 11th. The annual race, a 50-lapper for Modifieds paying $10,000 to the winner, is run to remember the man who had the idea for building the track and carried it through to create Grandview Speedway with the help of his son Bruce.

The Forrest Rogers Memorial is considered one of the most prestigious events to win and often attracts a bevy of visitors to try for the rich win. In addition the Late Models and Sportsman will be a part of the night of racing.

Admission for the August 11th special event is $25 for adults, $5 for youngsters 6 through 11 and FREE admission for those under 6.

New Jersey race fan Jim Gilmore, a big supporter of racing at Grandview, has posted $100 for the leader of lap number 18 in the name of the late racer Mike Bailey.

Spectator gates for Saturday night racing at Grandview open at 5:30 p.m. with racing action getting the green at 7:30 p.m. Regular events are offered for a $15 adult admission while youngsters 11 and under being admitted free.

At 5 p.m. the Low Down and Dirty Internet Radio Show sponsored Meet & Greet takes place with fans having the opportunity to meet racers, collect autographs, hear interviews and get an up close look at their race cars.