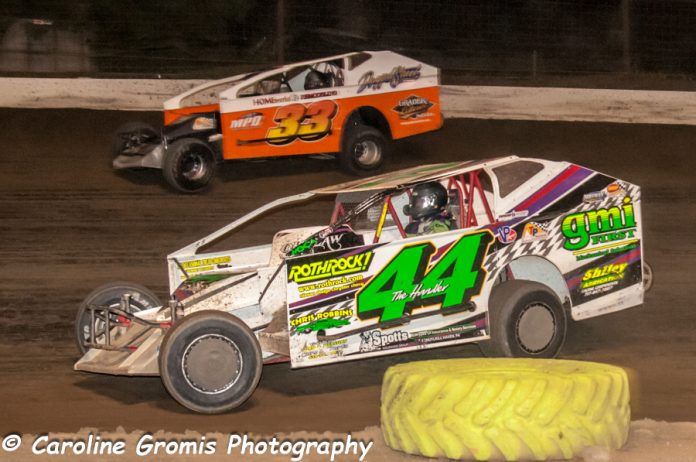 BECHTELLSVILLE, PA – All three NASCAR feature winners during the A.D. Moyer Lumber Night on Saturday at Grandview Speedway ended their winless streaks by claiming the victories in their respective feature. More than 80 racers took part in the racing action that was completed before 10:30 p.m.

Veteran campaigner and two-time Modified point champion Ray Swinehart struggled in the early portion of the season, but since he unveiled his new car it appears his luck changed. Despite being close on numerous occasions to pulling off the win in the 30-lap T.P. Trailers & Truck Equipment NASCAR 358 Modified feature, he couldn’t quite accomplish the feat. Taking advantage of the one and only restart to take first away from Skylar Sheriff, Swinehart was back in the winner’s circle – a place he was shut out of since June 13, 2015.

Mark Kemmerer, a bridesmaid the last time they raced, took the opportunity of the 19th lap caution in the 25-lap NASCAR Sportsman feature to overtake Derrick Smith for the lead and was able to claim his first win of the year. The last time he won was August 9, 2017.


Rookie racer Skylar Sheriff quickly took the early lead in the Modified feature and within no time he increased the distance between himself and Ray Swinehart, Ron Seltmann Jr., Bobby Gunther Walsh and John Willman, who jockeyed for the remaining positions.

A first turn ninth lap tangle between Seltmann Jr. and Frank Cozze brought out the yellow erasing Sheriff’s comfortable lead. On the restart Swinehart shot to the outside to put his self-owned/MVP No. 33 at the head of the pack.

By this time second through fifth behind him consisted of Sheriff, Willman, Ron Kline, another rookie and Kevin Hirthler.

On the 17th lap Willman finally cleared Sheriff for second after an eight-lap battle for the spot and took chase after Swinehart, who would soon encounter lap traffic.

Swinehart had to weave his way through the side-by-side slower traffic, who were also racing for positions as the laps wound down.

No one was able to reel Swinehart in to challenge him for the win as he continued on his way to career win number 29. Chasing him across the line for their season best finishes were Kline and Willman trailed by current point leader Mike Gular and K. Hirthler, another driver posting his best run.

The pack regrouped with 18 laps completed when Bryon Sipe’s bad luck continued bringing him to a stop in the fourth turn and the yellow to come out. S. Merkel continued his pace, but the real battle was for the runner-up spot between Pfeil and Schutz with neither one giving in.

The top five remained the same the entire race with S. Merkel showing the way to victory. Pfeil, Schutz, Snyder and Shuey trailed.

Sportsman action saw young Nathan Mohr, winner of the Summer Splash 40 earlier this season, set the pace for one lap until Smith motored ahead on the second circuit.

While Smith led the way, Mohr, Kemmerer, current point leader Louden Reimert and Lex Shive were in the hunt for the remaining spots.

Kemmerer overtook Mohr for second on the ninth lap and the battle for the lead was on. Kemmerer made several attempts to pass Smith, but each try failed.

Kenny Bock spun in the third turn for the yellow on the 18th lap. On the restart Kemmerer, shut out of victory the past few weeks, became the new leader as Smith went a little too high off of turn four.

Once Kemmerer was in front he never looked back and continued to chalk up his third career win. Posting his best finish since he won August 26, 2017 was Smith followed by Reimert, Shive and Brad Grim.

Kicking off August will be Checkered Flag Fan Club Night on Saturday, August 4th. Another tripleheader show of NASCAR stock car racing will be the attraction with the T.P.Trailers 358 Modifieds using the night to tune-up for the rich classic Pioneer Pole Buildings Forrest Rogers Memorial Classic set for Saturday, August 11th. The annual race, a 50-lapper for Modifieds paying $10,000 to the winner, is run to remember the man who had the idea for building the track and carried it through to create Grandview Speedway with the help of his son Bruce.

The Forrest Rogers Memorial is considered one of the most prestigious events to win and often attracts a bevy of visitors to try for the rich win. In addition the Late Models and Sportsman will be a part of the night of racing.

Admission for the August 11th special event is $25 for adults, $5 for youngsters 6 through 11 and FREE admission for those under 6.

Jersey Shore Grandview fan Jim Gilmore has posted $100 for the leader of lap number 18 in the Forrest Rogers Memorial in memory of the late Mike Bailey.

COMING EVENTS AS OF AUGUST 1