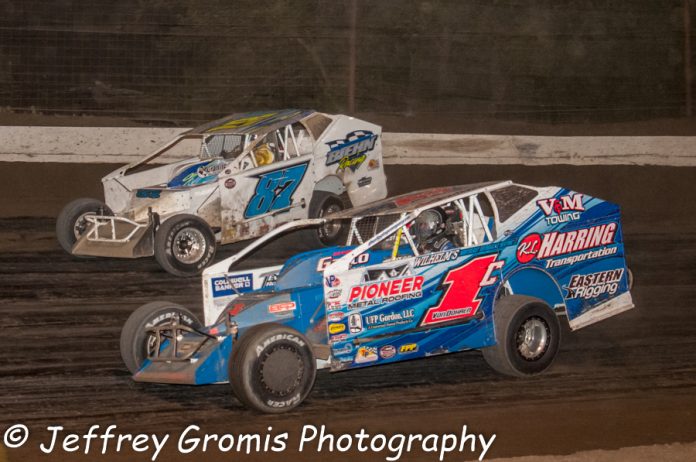 BECHTELLSVILLE, PA –  Craig Von Dohren, the defending NASCAR Modified point champion, won his third 30-lap T.P. Trailers & Truck Equipment NASCAR 358 Modified feature of the season on Saturday night at Grandview Speedway in an event that was marred by four-red flag incidents. Von Dohren was able to steer clear of the accidents and avoid being involved.

The 25-lap NASCAR Late Model feature had its share of mishaps also. With five laps to go, leader Kyle Merkel and Steve Wilson, both feature winners earlier in the season, made contact coming out of turn four. Both cars spun giving the lead to current point leader Danny Snyder. Snyder maintained the top spot and went on to chalk up his third win of the year.

Bob Trapper set the pace for two laps before the first red came out for a third turn chain reaction accident that blocked the track and eliminated Brett Kressley and Justin Grim. The restart was void and the second red unfurled when a multi-car homestretch accident saw Duane Howard flip with Frank Cozze, last week’s feature winner Ray Swinehart, Danny Erb and rookie Jordan Henn also involved and out of contention. All drivers walked away. Howard’s car received the most damage. When racing resumed, Trapper was still the leader while his son Bobby Trapper Jr., Doug Manmiller, already a winner a few weeks ago in the Jason Miller-owned mount; Skylar Sheriff and Ryan Grim, who started 20th in pursuit, followed.


The red was thrown with nine laps completed when Clay Butler hopped the wheel of another competitor and flipped along the frontshute. Also eliminated was Kory Fleming, making a rare appearance at Grandview.

The Trappers were still one and two on the restart, but now Grim, Manmiller and Kevin Hirthler, who came from deep in the pack from 23rd, completed the top five.

Lap 13 was an unlucky one for Meme DeSantis when he flipped along the homestretch for the fourth and final red flag. He was slightly shaken, but walked away. It was still the Trappers in the front row, but now Grim was pressuring the younger Trapper for second. Not far behind was Von Dohren, who started 21st after winning the consi for the second week in a row and K. Hirthler.

Lap 18 saw Von Dohren make a daring move when he went between Trapper Jr. and Grim to overtake second and set his sights on Trapper.

Von Dohren drove to the bottom of the track that many drivers felt was heavy due to all the rain during the week and put the Nick Gatto-powered No. 1C into the lead on the 20th lap.

Within no time Von Dohren checked out and increased the distance as the laps wound down.

The field regrouped on the 27th lap caution brought out when Trapper, who was having a solid run, spun into the homestretch infield, but was in a dangerous spot.

That setback didn’t hamper Von Dohren as he was off and running when the race restarted.

Von Dohren remained first until the drop of the checkered for his 105th Saturday night career win. Chasing him across were Grim, who faired better this week after being the first drop out last week; K. Hirthler, current point leader Mike Gular, who came from 23rd after having to run the consi and Jared Umbenhauer, who also ran the consi and started 25th.

The same drivers, plus a host of others will participate in the Pioneer Pole Buildings Forrest Rogers Memorial 50-lap race with $10,000 going to the winner. Included in the show will be the Late Model and Sportsman classes.

Kyle Merkel wasted no time charging from second and into the lead at the onset of the Late Model feature leaving Lou Egrie, Cory Merkel, Snyder and Wilson in tow.

While in third, C. Merkel spun in the second turn on lap four. The restart was void when Steve Todorow was facing the wrong direction turn two. After two tries, K. Merkel was still the pacesetter trailed by Egrie, Wilson, Chuck Schutz and Drew Weisser.

Egrie, who was running a solid second, spun in the second turn bringing out the caution on lap 16. At the same time Schutz, who was fourth, went pit side and was finished for the night. Merkel held first when action continued, but Wilson was giving him no room to slip-up.

While battling for the lead, Merkel and Wilson touched, both spun in the fourth turn and Snyder, who was at the right spot at the right time, was the new leader with five laps to go.

Snyder never faltered and was in the winner’s circle for the third time and career win 12 followed by C. Merkel, for his season best finish; Todorow, Wilson and Wayne Pfeil.

A multi-car fourth turn caution on the fourth lap eliminated Mark Kemmerer’s chances of making it two in a row as he was towed back to the pits. Clemmer held his position on the restart, but Jesse Landis was making his presence known.

The lead changed on the sixth lap when Landis was able to overtake Clemmer and one lap later Lisowski was second.

Landis’ lead was short-lived since two laps later Lisowski was at the head of the pack.

The red was thrown on the 19th lap after Ryan Higgs, who returned to action a few weeks ago after destroying his car earlier in the season, flipped in turn two. He was uninjured, but once again the car was badly damaged. Lisowski motored away fast on the restart to stay in command.

Once Lisowski had the lead he never looked back and went on to claim his tenth career triumph. Chasing him across the line were Butler, Reimert, 14-yr.old rookie Alex Yankowski in his first appearance at the track for an impressive run and Funk IOII.

NASCAR stock car racing action returns to Grandview this Saturday, August 11th, with the running of the annual Pioneer Pole Buildings Forrest Rogers Memorial, a 50-lapper for Modifieds, paying $10, 000 to win. The Late Models and Sportsman will be part of the events that start at 7:30 p.m. Adult admission is $25, youngsters 6 thru 11 pay $5 and kids under 6 are admitted FREE.