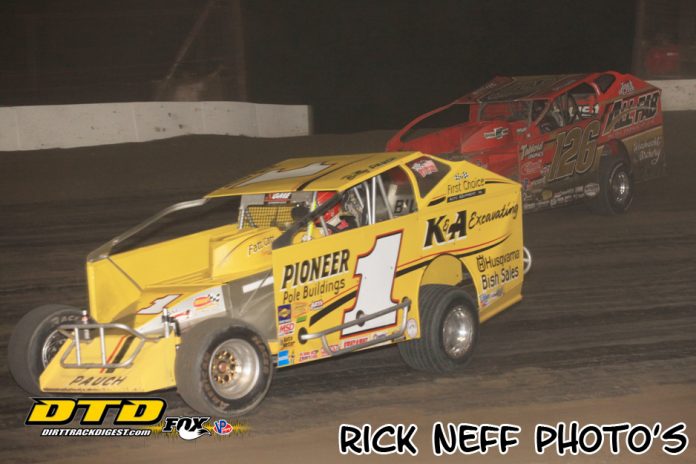 “I’ve never had such good equipment in my life,” Reutzel said after his 8th All Star win of the season propelled him into the points lead.  “All of my wins this season are thanks to my team.”

Reutzel led the field to the green, by drag racing side-by-side with Tim Shaffer down into the first corner of the one-third mile Berks County oval.  Reutzel’s No. 87 pulled away in dramatic fashion before a lap five yellow slowed the field.

Positions maintained on the restart and four laps clicked off before the red flag flew on the ninth circuit when the No. 44 of Trey Starks ended upside down after an altercation involving Tony Stewart and Lucas Wolfe.

Reutzel held control on the restart with a thrilling battle for second between Tim Shaffer and Paul McMahan while Greg Hodnett challenged Chad Kemenah for the fourth place position.

While Paul McMahan closed in on Reutzel’s lead — all eyes were on Freddie Rahmer.  The defending Thunder Cup Champion charged into the fifth spot just prior to the halfway point and into the third position just a few laps later.

Lapped traffic hindered Reutzel’s momentum on the 20th trip around the Grandview Speedway closing the distance between the top five competitors.  Reutzel held control through lapped traffic with a pair of driver duels behind him Paul McMahan and Freddie Rahmer battled side-by-side for second with Tim Shaffer and Kyle Larson in tandem competing for fourth.

The yellow flew on lap 27 when Shaffer spun while running in the fifth position.

Reutzel continued control on the restart with Rahmer on his rear bumper, while McMahan and Kyle Larson battled for the third position.  Larson pulled around McMahan on the high-side – but the yellow flew relegating the Speedweek winner back to fourth position.

With Rahmer and Larson in a heated battle for the runner-up spot – making contact on the backstretch, Reutzel charged away with a sizable advantage and claimed his first NAPA Auto Parts Thunder on the Hill Racing Series victory.  Freddie Rahmer came home in second, Kyle Larson finished in third, Paul McMahan in fourth, and Chad Kemenah in fifth.

The event started off on a high note with Aaron Reutzel smashing a 10-year track record set by Jeff Shepard on May 21, 2008.  Reutzel’s time of 11.243 was almost two-tenths of a second faster.  Paul McMahan and Freddie Rahmer also set times under the original record with a 11.399 and a 11.402 respectively.

On the fifth lap, Jeff Strunk powered to third from the seventh starting position and moved around Kevin Hirthler six laps later.   Pauch approached lapped traffic on lap 12 before the yellow flag flew for the first time when Brett Kressley spun.

On the restart Pauch took control and held off Jeff Strunk.  Strunk closed but couldn’t muster enough to make the pass.  Laps ticked off and Pauch claimed the checkered flag.  Strunk settled for second, Kevin Hirthler in third, Duane Howard in fourth, and Ryan Godown in fifth.