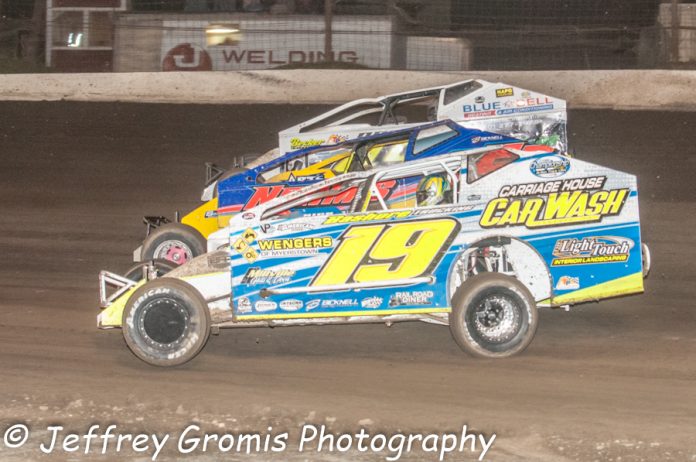 BECHTELLSVILLE, PA – Jared Umbenhauer has had to overcome several obstacles throughout the season at Grandview Speedway while trying to collect his first win of the year. Saturday night Umbenhauer finally got the monkey off his back when he parked the Kevin Brown owned No. 19 in victory lane in the 30-lap T.P. Trailers & Truck Equipment NASCAR 358 Modified feature. “It felt so good to win commented the Richland Rocket.” “The crew and family stuck by me after the horrendous third turn fire in the early part of the season and Mike Harvey then left me drive his car until we rebuilt.” He also thanked his crew chief Jason Hernley for setting up the car which was really fast that allowed him to keep hitting his marks the last five laps.

The win set Umbenhauer to be a favorite when the Modifieds compete in the Pioneer Pole Buildings Forrest Rogers Memorial 50-lapper, paying $10,000 to win next Saturday.

Chuck Schutz finally had a change of as he was able to chalk up his second 25-lap NACAR Late Model feature win to hit the Big 50 in career wins.

Jim Housworth rejoined the sportsman ranks after missing several weeks and the hard work paid off. Shut out of the win column since April 16, 2016, he was determined to hold off runner-up Craig Whitmoyer’s challenges to post his first win of the current campaign.

All feature winners received a monetary award from T.P. Trailers, product awards from V.P. Racing Fuel providing they met the necessary requirements which also included the Dan’s Deli ½-way hoagie award. There have been 25 feature winners so far this season spread over the three divisions of racing that regularly compete at the Bechtelsville clay oval.


Andy Cassel was the victor in the 15-lap Blast From the Past Vintage car feature that was in memory of fellow racer Dave Smith who lost his life last year in a work-related incident.

Henn’s bad luck continued as while running third he suffered mechanical problems that brought him to a stop in turn one for the first caution with nine laps completed. On the restart Brian Hirthler, who switched over to the Modified ranks from Sportsman in the beginning of July, charged into the lead followed by Umbenhauer, Danner, Ryan Grim and Duane Howard.

Heading out of the fourth turn on the 13th lap, B. Hirthler went a little too high and Umbenhauer scooted underneath him to become the new leader.

Once Umbenhauer was in front he began distancing himself from the others and in a matter of time he encountered lap traffic.

Battling for positions behind Umbenhauer were Howard and Jeff Strunk, who started 12th and 13th respectively, B. Hirthler and Ryan Grim.

The field regrouped putting the competition right on Umbenhauer’s bumper when Bobby Trapper Jr. was spun in the third turn. Umbenhauer wasted no time punching the accelerator when action resumed since he knew Howard, Strunk, B. Hirthler and R. Grim were in pursuit.

Strunk took over second with four laps remaining to attempt to pass Umbenhauer for the lead.

No one was able to overtake Umbenhauer after he held off all challenges to win the feature ending his winless drought since the last time he stood in the winner’s circle was June 24, 2017.Chasing Umbenhauer across were Strunk, Howard, Frank Cozze and Ryan Grim.

B. Hirthler, Howard, Danner and Umbenhauer were the heat winners. The consolation races were won by Brett Kressley and Kenny Gilmore.

These same drivers plus a host of others used this week as a tuning session for the Pioneer Pole Buildings Forrest Rogers Memorial 50-lap race with $10,000 going to the winner. Included in the show will be the Late Model and Sportsman classes.

Drew Weisser set the pace for three laps in the Late Model feature with Schutz chasing him until a three-car tangle in the second turn brought out the caution. On the restart Schutz shot into the lead to put the Ty Zeigler owned mount into first.

Within no time Schutz was walking away with the race making it look easy. Trying to track him down to pressure him were Weisser, Steve Todorow, Wayne Pfeil and Cory Merkel.

Despite a few more restarts Schutz never surrendered the win and went on to claim his second win of the season. Chasing him across were Todorow, Weiss, Pfeil and Lou Egrie.

Sportsman action saw Steve Young grab the early lead and show the way for eight laps until Kenny Bock stopped along the backshute bringing out the yellow. When the race went green again Housworth moved into the lead with Craig Whitmoyer following through for second to challenge. Behind them Young, Jack Butler and Andy Kreis diced for the remaining positions.

Butler’s bids went up in a huge plume of smoke while running third when a blown engine eliminated him bringing out the yellow on the 13th lap. Housworth held his own on the restart with Whitmoyer giving him as run for the money.

Housworth held the outside lane while Whitmoyer stuck to the low groove as the side-by-side battle continued.

Housworth managed to keep the competition behind him to claim the victory followed by Whitmoyer, Mike Lisowski, Brad Brightbill and Mike Mammana.

In the Vintage feature Todd Lapp led seven laps before Bill Gerhart hit the wall bringing out the yellow. He was uninjured. On the restart Cassel overtook first and immediately began opening daylight.

Once Cassel was first he remained there until the drop of the checkered. Finishing second was Lapp followed by Ron Phillips, Bobby Hall and Rick Mutter.

Saturday, Sept29 Enduro & Blast from the Past Vintage Cars plus 600 Mods —1 PM

Saturday, October 27 Enduro & Blast from the Past Vintage Cars—1 PM