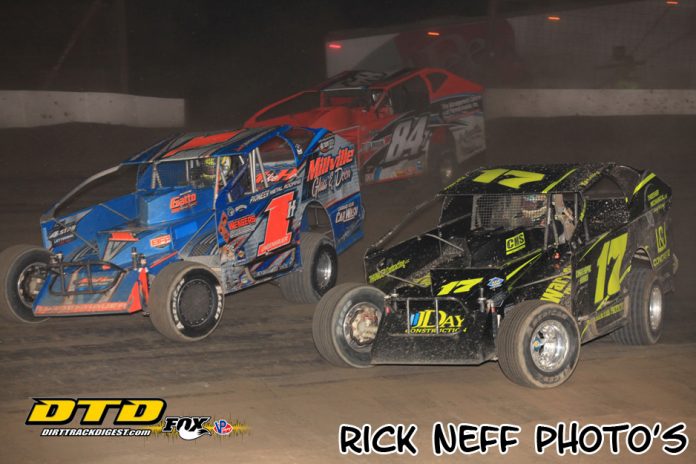 BECHTELSVILLE, PA – Two traditions come together at the Grandview Speedway on Saturday night, October 13 to close out the NAPA Auto Parts Thunder on the Hill Racing Series for 2018.

The popular fun for all House of Thunder Halloween Party will treat the fans with the 21st running of the 40 lap Traffic Jam for Big Block Modifieds & 358 Modifieds. Also on the program will be the Sportsman and MASS Sprints. Pit gates will open at 2:30 PM, the front gate will open at 4 PM and race time is set for 6 PM.

Advance tickets may be ordered by calling 443-513-4456. Please speak clearly and leave your name and the number of tickets you would like. Tickets may be paid for and picked up at the Will Call Window on race night after 3:00 PM. Advance ticket holders may enter the grandstands at 3:30 PM, one half hour prior to general admission tickets going on sale at 4 PM. Advance tickets orders will be available until 9 AM on race day, Saturday, October 13, then general admission tickets go on sale at 4 PM.

This haunting Halloween trick-or-treat celebration will spotlight the Modified Traffic JAM which is rich in history that started in 1998 when Brett Hearn took the initial win. In the twenty year history of the Traffic Jam, Hearn is a four time winner. Tim McCreadie, Billy Decker and Matt Sheppard are two time winners of this event. Drivers who have one Traffic Jam victory include Jimmy Horton, Frank Cozze, Tim Fuller, Alan Johnson, Danny Johnson, Craig VonDohren, Jeff Strunk, Duane Howard and Rick Laubach. The defending Traffic Jam winner is Brett Kressely, making it his first Traffic Jam victory and first Thunder on the Hill win.

$5,000 will go to the winner of the 40 lap Traffic Jam with a hefty $1,000 for tenth and $500 just to start the main event. A special rules package is offered as a ‘treat’ to the region’s competitors, with both American Racer and Hoosier tires allowed for competition, and either Big-Block or Spec Small-Block engines permitted. An event sheet with the complete payoff, rules and details is posted on the website at: www.thunderonthehillracingseries.com.

The popular Sportsman division is also on the card, competing for a $1,300 top prize for 25-laps of competition on ‘the hill.’ A loosened tire rule is in effect for the Sportsman – competitors are allowed to compete on Hoosier or American Racer rubber. Grandview Sportsman rules are in effect and competitors are allowed to run sail panels. Full rules are available on the Grandview Speedway website.

The NAPA Auto Parts Thunder on the Hill Racing Series presents Mods at the Madhouse 40 Lap Traffic Jam – the conclusion of the 29th season of Thunder action – featuring the popular Halloween Party, is a full-show with three divisions of racing action including a Big-Block vs. Small-Block Modified challenge Traffic Jam, the Sportsman division, and the MASS Sprint Cars.

The brainchild of Grandview Speedway owner Bruce Rogers, special events promoter Bob Miller and local driving star Dave Kelly, the Thunder on the Hill Racing Series celebrates 29 years of the most anticipated events of the racing calendar year after year. In 131 events over $4.5 million dollars has been divvied up among the area’s fastest racers. What started as a single 410 Sprint Car event in 1990 has blossomed to feature a variety of racing action including 358 Modifieds, USAC Wingless Sprints, All-Star Circuit of Champions, 360 & 410 Sprint Cars, Sportsman, Late Models, Midgets, Legend Cars, DIRTcar and ROC Modified events.