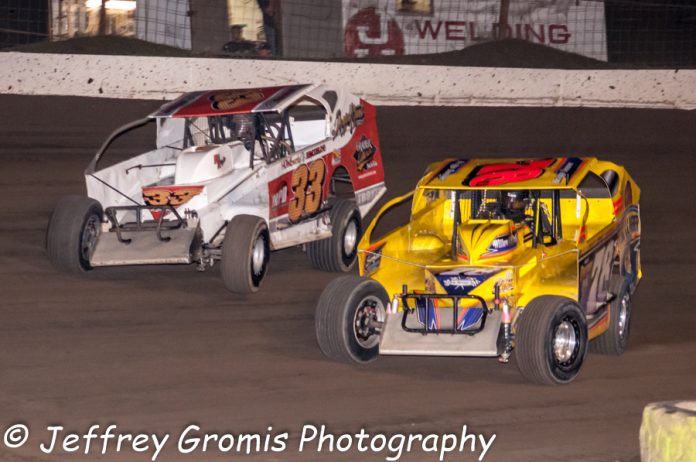 BECHTELSVILLE, PA – The battle for the NASCAR and track championships will go down to the final point race on Saturday, September 8th when the WNPV 1440AM Radio Champions Night is presented at Grandview Speedway with action for the three division show getting the green at 7:30 p.m.

Mike Gular has been the point leader in the T.P.Trailers 358 Modifieds most of the season. Without benefit of a feature win Gular, looking to win his first championship, has used consistency to hold on to the top spot and hopes consistency, or perhaps a feature win on the final night, carries him to the title. Gular has 3536 counters compared to 3386 for second place Craig Von Dohren, a ten time champion. Von Dohren has three wins to his credit and is 150 points behind the leader. Jeff Strunk, another 10 time champion, has tallied 2 wins and3351 points, putting him 185 points behind. With the most points available to a driver on Saturday being 310 only these three drivers have a chance to win the lucrative title.

Sophomore standout Louden Reimert has not won a feature in the Sportsman division but like Gular he has used consistent performance to tally 2684 points to hold a 135 point edge over Brad Grim and 236 counters more than Mike Lisowski. Only these three drivers can win the Sportsman title on the final point night as just 260 points can be earned.

And in the Late Models, much like Gular and Reimert, Danny Snyder has set the pace in the point battle for the season. With 2211 points and three wins Snyder has a 158 edge over defending champion Chuck Schutz. Snyder and Schutz have each earned three wins. With just 210 points available only Wayne Pfeil in third spot and Kyle Merkel in fourth join Reimert and Schutz as possible champions.

There have been 123 different drivers earn points racing in the three divisions with 12 different winners in the Sportsman, 8 winners in Modifieds and 7 winners in Late Models.

All three divisions will be in action on Saturday night. This will be the final night of racing for the Late Models while the Sportsman return on Friday night, September 14th in a doubleheader Freedom 38 show that will also feature the exciting Mid Atlantic Sprint Series in a 7:30 p.m. show. The Sportsman will run in a non-points race.

Modified racers will be looking forward to the $25,000 to win 48th Annual Freedom 76 set for 7 p.m. on Saturday, September 15th. Many will be using this night as an opportunity to test and tune for the big money event.

Advance tickets are available at the track prior to September 15th for the Freedom 76 and are priced at $35 while on race day they are priced at $40.

Additional information can be had at www.grandviewspeedway.com, Facebook or telephone 610.754.7688.