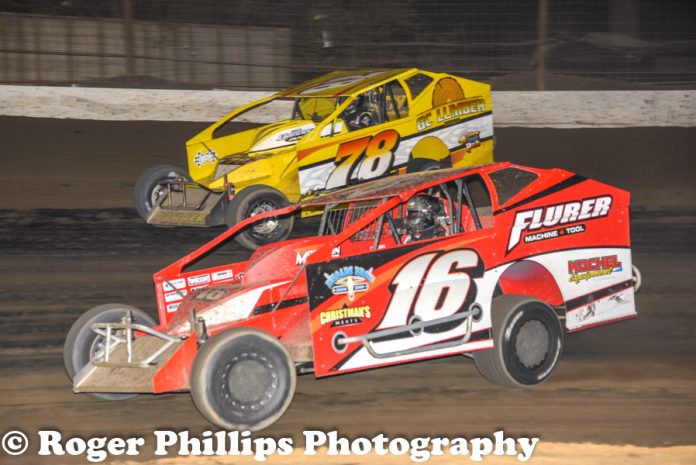 BECHTELSVILLE, PA – Three different classes of racing competition will be the attraction on Saturday night, April 20, when Blast from the Past Vintage racers join the T.P.Trailers 358 Modifieds and T.P.Truck Equipment Sportsman for an exciting show of racing action starting at 7 p.m. at Grandview Speedway.

The Checkered Flag Fan Club, that nation’s oldest auto racing fan organization, will be making their annual visit to Grandview Speedway to honor race winners and to sign up new and renewal members.

Fans coming out for the Saturday night show will get the opportunity to see what racing was like during years gone by when the Vintage racers take to the track for some very entertaining action.

Brett Kressley will be looking to make it two wins in a row when the NASCAR 358 Modifieds take to the track followed by the Sportsman racers with Jack Butler looking for his second win of the very early season. A full series of qualifying races will have the top performers racing in a 30-lap main event for the Modifieds and a 25-lap feature for the Sportsman.

The Low Down & Dirty Meet and Greet will have Eric Biehn and Dean Bachman meeting fans and showing off their race cars near the main grandstand entrance starting at 4:30 p.m. and continuing until at least 5:30 p.m.


The tripleheader show has the same $15 adult admission price in place along with youngsters under 12 being admitted free.

The Mid Atlantic Sprint Series, featuring the exciting 305 Sprints, will be part of the tripleheader show on Saturday, April 27th at 7 p.m. The Sprints will be featured along with the T.P.Trailers NASCAR 358 Modifieds and T.P.Truck Equipment Sportsman. Adult admission will be $18 while youngsters under 12 being admitted free. This will be the last Saturday night show of the regular season using a 7 p.m. starting time as Saturday starts switch to 7:30 p.m. starting on May 4th.

Outlaw Enduro and Blast from the Past Vintage racers will be back in action at Grandview Speedway on Sunday, May 19th with at 1 p.m. starting time. Adult admission is $10. Children under 11 are admitted free.

Grandview Speedway, a one-third-mile, banked clay track, is located at 43 Passmore Road in Bechtelsville, PA, just off Route 100 ten miles north of Pottstown. For information check in at www.grandviewspeedway.com, Facebook or telephone 610.754.7688.