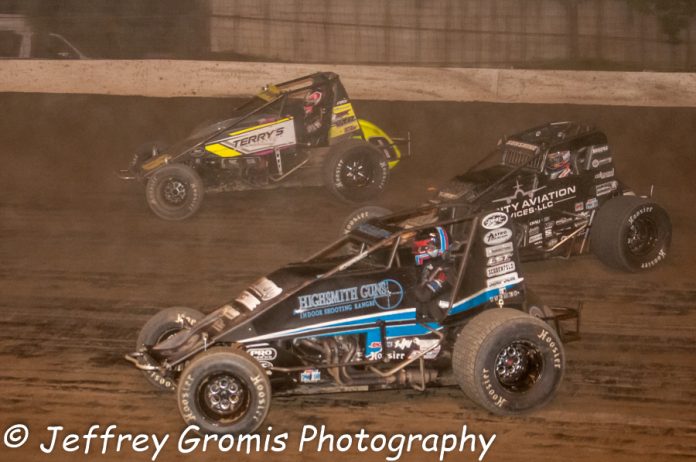 BECHTELSVILLE, PA – The NAPA Auto Parts 30th Anniversary Thunder on the Hill season opener is set for Tuesday night, June 11 at the Grandview Speedway. The series that just doesn’t quit will return to the hill on Tuesday night, June 11 with the Jesse Hockett $10,000 to win USAC Non-Wing National Sprint Series event, joined by the 358 Grandview modifieds. Fans with Advance tickets may enter the grandstands at 4:30 PM with General admission tickets going on sale at 5 PM. Race time is set for 7:30 PM. This spectacular double header brings together two premier divisions that is sure to rock the house.

“It’s exciting to think that we are going into our 30th year of Thunder on the Hill and the Jesse Hockett Classic is a great way to open the series” Promoter Bob Miller said. Some 13 years ago, it was Miller and track owner Bruce Rogers who worked out the deal to bring the nationally known USAC stars back to Pennsylvania.

On June 11, the USAC AMSOIL National Sprint Car Series takes to the track for thJesse Hockett Classic, featuring a $10,000 payday that will help highlight the King of the non-wing jungle. ‘The Macho Man’ Brady Bacon proved he has mega powers at Grandview Speedway claiming the past two USAC victories – but anything can happen on the third-mile when there are $10,000 bucks up for grabs.

The PA Posse 410 sprint cars invade the Grandview Speedway on Tuesday, July 2 and they’ll be competing for $10,000 to win the twenty-fifth Grandview Speedway Pennsylvania Sprint Car Speed Week event. NASCAR Cup Series star Kyle Larson has put the PA Posse in their place for two consecutive seasons, but a strong field of local competitors plans to keep that cash on home turf. Look for local favorite Ryan Smith to hunt down and capture that first career Thunder victory wheeling the Mike Heffner sprint car in the new season.


The debut of the NOS Energy Drink USAC National Midgets takes place on Tuesday, July 30. For years fans have begged, bargained, and pleaded for the Midgets on the Bechtelsville high banks and there’s no better time than the 30th Anniversary season of Thunder on the Hill. Many of the same USAC Sprint Car stars will strap into midgets for this event like Brady Bacon and Kevin Thomas, Jr.

The NAPA Auto Parts Thunder on the Hill Racing Series concludes on Saturday, October 22 with the House of Thunder Halloween Party featuring the 22nd running of the Modified Traffic Jam – where Big-Blocks battle Small-Blocks in the Mods at the Madhouse. Alongside the Modifieds, the Sportsman, and MASS Sprint Cars will also be in action.