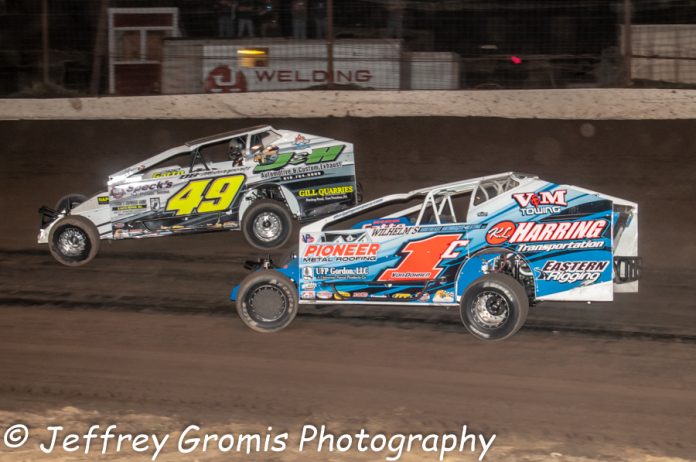 BECHTELSVILLE, PA – Craig Von Dohren and Brad Brightbill became the first repeat winners of the season on Saturday night at Grandview Speedway when they each won the features in their respective classes and were also able to beat out the forecasted rain.

Ten-time NASCAR Modified point champion Von Dohren piloted the Nick Gatto-powered No. 1C in front of leader Ryan Lilick at the Dan’s Deli ½-way hoagie segment of the 30-lap TP Trailers NASCAR 358 Modified feature and went on to chalk up his 107th Saturday night career win ahead of runner-up Doug Manmiller, who finally had a change of luck to post a decent finish.

Brightbill overtook Tom Miller, who returned to the racing wars after a two-year hiatus, on the 15th lap restart of the TP Truck Equipment 25-lap Sportsman NASCAR feature to garner his second victory which was his seventh career win at the track.

Providing all feature winners met the necessary requirements, the Modified and Sportsman feature winner received monetary awards from TP Trailers and a certificate from VP Fuels for product awards

Bobby Gunther Walsh set the pace for one lap of the Modified feature before the red flag was thrown for a backstretch incident. Bobby Trapper Jr.’s car suddenly slowed and he was trying to pull into the infield. Cars scrambled and were left with nowhere to go. For the second week in a row Jeff Strunk and Brett Kressley were victims of circumstances and eliminated from action as well as Alex Yankowski, Steve Swinehart and Danny Erb. When action went back to green again, Ryan Lilick was the new pacesetter trailed by Gunther Walsh, Dan Waisempacher, Jared Umbenhauer and Briggs Danner.

Duane Howard, last week’s feature winner who was in the backstretch skirmish earlier but rejoined the race, brought out the next yellow with three laps complete. A piece of sheet metal came off the car on the backstretch. Gunther Walsh regained the lead, but one lap later Lilick was back in front.

By the eighth lap Von Dohren, who started 14th, was on the move in second spot challenging Lilick for the lead, but the youngster kept the veteran behind him trailed by Manmiller, Waisempacher and Umbenhauer.

After battling with Lilick for seven laps, Von Dohren finally succeeded in passing him for the top spot.

Lapped traffic came into the picture by the 18th circuit as the front runners had to be [prepared.

Lilick’s stellar performance while running a solid second, ended when he came to a stop in the first turn out of contention with ten laps to go. Von Dohren was still the leader on the restart, but now Manmiller, Umbenhauer, Waisempacher and Danner completed the top five running order.

The second red flag of the event came out on the 24th lap after Umbenhauer’s throttle stuck and he hit the third turn wall with heavy impact. He was uninjured and actually drove the car back to the pit area. When action resumed Von Dohren continued to be stalked by Manmiller, Danner, Waisempacher and now Frank Cozze.

Manmiller and Danner battled fiercely for second which allowed Von Dohren to gain momentum and build up a slight edge.

Despite the fact Tim Buckwalter, running in the top ten, brought out the caution with two laps to go, Von Dohren still held the competition off and went on to the winner’s circle. Following him across the line to post their season best finishes were Manmiller, Danner, Waisempacher and Whitmoyer. Cozze received the Hard Charger coming from 28th to sixth, followed by Kenny Gilmore, driving his own car; Kevin Hirthler, Ray Swinehart, Cargo Trailers award recipient; and Kyle Weiss.

Mohr advanced to second on the third lap restart needed after Brian Hirthler and Brad Arnold made contact in the second and Arnold spun and had to be towed off out of action.

Mohr’s night ended after Kemmerer and Mohr collided and Mohr ended up spinning into the field and had to be towed off. Brightbill motored away quickly in the Leindecker Racing Engines No. 19 with Butler now in a challenging position looking for this second win of the year. Butler made several attempts to pass Brightbill, but each attempt was void.

Once Brightbill had control he continued to show the way until he pulled in victory lane. Second through fifth were Butler, Kemmerer, Brad Grim and another rookie Kyle Smith.

Smith, Vaccaro and Brightbill won the heats. The consi went to B. Grim.

Vaccaro, who finished 12th, was the highest crate engine finisher and received an additional $100 bonus.

Todd Lapp led five laps of the Blast From the Past feature before he spun and Undercoffler inherited the lead with Andy Cassel taking over second to challenge as the yellow came out.

Undercoffler never gave up the top spot and went on the win the Modified portion followed by A. Cassel, Lapp, Bobby Hall and Henry Yeska. Seventh place finisher Mike Garris Jr. was the Vintage class winner.

T.P.Trailers NASCAR 358 Modifieds and T.P.Truck Equipment Sportsman make up an exciting doubleheader show set for Saturday, May 11th with a 7:30 p.m. starting time. The first 50 mothers through the gate will receive a gift courtesy of the speedway as part of the Mother’s Day celebration and the youngest and oldest mom will get a free pass for a future race event. In all the events run for the Modifieds and Sportsman so far this season there has been nearly 70 race cars on hand for the two NASCAR divisions of racing and this Saturday should be no different. Adult admission is $15 with youngsters under 12 admitted free. Pit admission is priced at $30. Active military with proper ID are admitted free.

And on Saturday, May 18th the Rapid Tire United States Auto Club (USAC) East Coast Wingless Sprint cars will make their first appearance at Grandview. Making up a tripleheader night of heart stopping action will be the Modifieds and Sportsman. Adult admission is $20, youngsters 6 through 11 will be admitted for just $5 and those under 6 are admitted free.