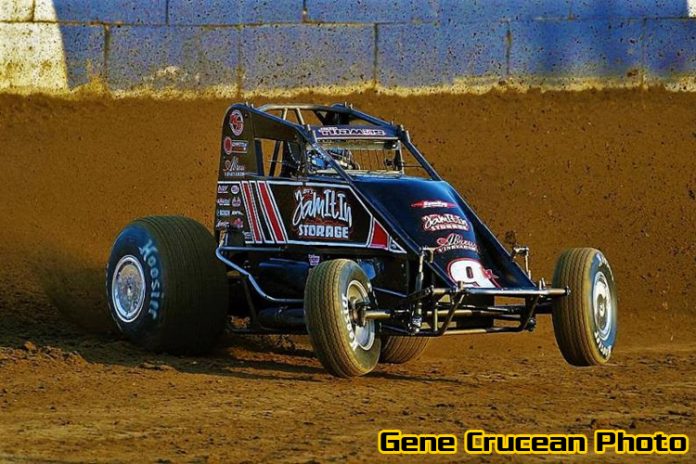 BECHTELSVILLE, PA – The stars of the Amsoil USAC Non-Wing Sprint National Tour only come east one time per year and it all kicks off on Tuesday night, June 11 at the Grandview Speedway in Bechtelsville, PA. The 13th Annual USAC Eastern Storm will invade “the hill” as the first event of the NAPA Auto Parts Thunder on the Hill Racing Series with the hefty $10,000 to win Jesse Hockett Classic. This eye catching first place prize is part of the 30th Anniversary celebration for the Thunder on the Hill Racing Series. Joining the USAC Non-Wing sprints are the popular NASCAR 358 Modifieds. Gates open at 5 PM with qualifying getting underway at 7:30 PM.

If you have never seen the AMSOIL USAC Non-Wing sprints at Grandview, it’s a must see event. The non-wing USAC National Tour are just perfect for the one-third mile high banked oval nestled on top of the hill in Bechtelsville, PA. Even time trials are a thrill as the non-wing sprints show wheelies and use so much of the race track that they are bouncing off the outside boiler-plate wall.

This event is dedicated a “classic event” to honor all-time sprint car great Jesse Hockett. Many us remember that special night on the hill, when Jesse won both twin 20 lap USAC features, thrilling the Grandview fans in 2009. In 2010, just prior to the Eastern Storm, Hockett succumbed to injuries suffered in a race shop accident. Levi Jones won the first Jesse Hockett Classic in 2010.

The NAPA Auto Parts Thunder on the Hill Racing Series concludes on Saturday, October 19 with the House of Thunder Halloween Party featuring the 22nd running of the Modified Traffic Jam – where Big-Blocks battle Small-Blocks in the Mods at the Madhouse. Alongside the Modifieds, the Sportsman, and MASS Sprint Cars will also be in action.