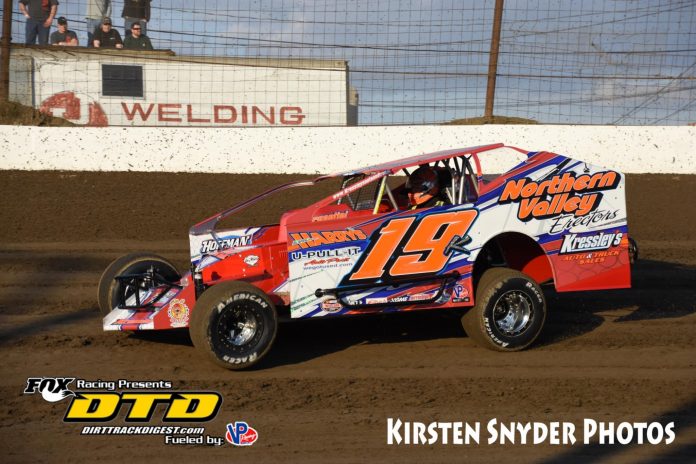 BECHTELSVILLE, PA – Brett “The Threat” Kressley, behind the wheel of the Kressley family owned No. 19K, scored his second 30-lap TP Trailers NASCAR 358 Modified feature victory on Saturday night at Grandview Speedway in a down-to-the wire battle with Skyler Sheriff, the leader since the beginning of the event. The pair had several laps of paint swapping battles, but with one lap to go the Orefield based lead foot muscled the lead away from Sheriff and went on to chalk up the win.

Brian Hirthler, who’s regular No. 4 Star was waiting for repairs, borrowed his Brother Kevin’s backup No. 117X with a crate engine in it and won his first TP Truck Equipment 25-lap Sportsman NASCAR feature of the season. It was the same car Kevin won the opening race in. Brian received an extra $100 from the track for being the highest finishing driver with a crate engine.

Tim Buckwalter, doing double duty driving Modifieds and Sprints piloted the GEI-owned No. 5G to victory in the 25-lap Rapid Tire USAC East Coast Sprint Cars feature. It was just the second time for Buckwalter in the car.

Providing all feature winners met the necessary requirements, the Modified and Sportsman feature winner got monetary awards from TP Trailers and a certificate from VP Fuels for product awards. Sheriff and Mohr won the Dan’s Deli ½-way hoagie award.

More than 100 cars took part in the three division show.

Modified action saw Sheriff motor ahead of rookie Steve Wilson, Ron Seltmann Jr., Ron Kline and Mike Laise at the start of the race to set the pace for the 31-car starting grid that included provisionals taken by Craig Whitmoyer, Jeff Strunk and Craig Von Dohren.

The yellow was out when Bob Trapper Jr. slowed in the fourth turn with ten laps completed. Sheriff was still the leader on the restart, but now Seltmann Jr. was second and when he put in a bid for the lead he was taken high into the first turn marbles. He stayed out of the wall, but fell back several positions.

By the 13th lap restart needed when Buckwalter slowed in turn two, Kressley, 13th-place starter, advanced to second to pressure Sheriff for the top spot.

Behind Sheriff and Kressley waiting for a slip-up were Duane Howard, Ron Kline and Jared Umbenhauer.

The red was thrown on the 23rd lap after Frank Yankowski hit the third turn wall with heavy impact and had flames coming out from underneath his car which was extinguished quickly. Alex Yankowski was along the third turn inside berm with both out of contention. Sheriff held his line when action resumed, but not he had to contend with Howard, who was in the runner-up spot making his presence known.

Sheriff and Howard exchanged paint on occasions and with five to go Kressley was back in second with Howard, Umbenhauer and now Rick Laubach in pursuit.

The battle for the lead continued between Sheriff and Kressley with neither one giving an inch as the race progressed. Both drivers swapped lanes several times, but the outcome remained the same.

Coming around for the one to go signal Kressley made a bold move and managed to take the lead away after using every inch of the track to find a way around.

Kressley didn’t give Sheriff another chance to regain the lead and pulled into the winner’s circle for his 11th career win. Following him across the line for his best finish was Sheriff trailed by Howard, Umbenhauer and Laubach. Sixth through tenth were Frank Cozze, Mike Laise, Von Dohren, Ryan Grim and Doug Manmiller.

Derrick Smith led four laps of the Sportsman feature before Brad Brightbill slowed with a flat tire in the first turn for the yellow. On the restart Nathan Mohr jumped into the lead to take control of the race.

It didn’t take Mohr long to build up a sizeable lead over Smith, Mike Mammana, Kyle Lilick and Nate Brinker.

Lap 13 was certainly an unlucky won for Mohr as his car seized up bringing him to a halt in turn two bringing out the caution. Mammana, who inherited the lead, wasted no time staying in front of the pack when action went green again with Smith, Brinker, Hirthler and Lilick in pursuit.

Hirthler overtook second on the 17th lap and set his sights on Mammana and the lead.

The lead changed hands for the fourth and final time on the 22nd lap when Hirthler overtook first.

Hirthler, whose contact in his right eye shifted earlier in the race and he had to rely on his left eye until it moved to a comfortable spot, never looked back once he was in front and proceeded into victory lane for his fourth career win. Mammana, Smith, Lilick and Brinker chased him across. Ryan Beltz, Brad Grim, Jack Butler, Brad Arnold and Brightbill rounded out the top ten.

Heats were won by Mohr, Mammana and Josh Adams. The consi went to Butler.

Joey Biasi led the USAC Sprint feature for four laps before Buckwalter charged to the front of the pack.

Quackenbush’s strong run ended when he slowed on the homestretch to bring out the seventh lap caution. It was still Buckwalter ahead with Chandler Leiby joining the mix.

Drevicki was on the move as he went from fourth to second in one lap to take chase after Buckwalter.

No one was able to reel Buckwalter in to challenge and he went on to take the checkered followed by Drevicki, Perigo, Biasi and Leiby.

Next Saturday, May 25, a doubleheader show of NASCAR T.P.Trailers Modifieds and T.P.Truck Equipment Sportsman closes out the month of May as the battle for the NASCAR titles goes on. Racing starts at 7:30 p.m. Adult admission is $15 with youngsters 11 and under admitted free. Spectator gates open at 5:30 p.m.

Coming up on June 1st is the first of two visits for the Central PA Legends as part of a tripleheader show that will also feature the NASCAR Modifieds and Sportsman stock cars. There is no increase in the admission price for this tripleheader.