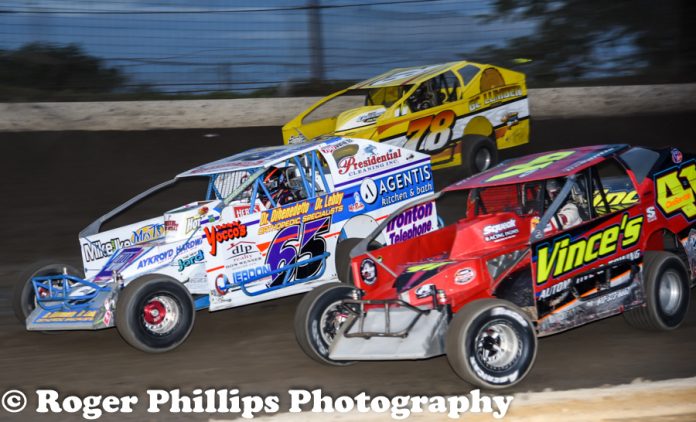 BECHTELSVILLE, PA – With five Saturday nights of NASCAR stock car racing along with some special events the month of June at Grandview Speedway will be a busy one.

On Saturday, June 1, the first time appearance of the Central Penna Legends cars will be part of a tripleheader show that also features the T.P.Trailers Modifieds and T.P.Truck Equipment Sportsman. The good news for fans is that the 7:30 p.m. show will not see a price increase. Adults will be admitted for just $15 while youngsters under 12 will get to be part of the excitement for FREE. This will also be the first of six events seen on RCN-TV at a later date.

Going into Saturday night’s racing Rick Laubach of Hellertown, PA has taken over the top spot in the T.P.Trailers NASCAR Modified standings with 1499 points giving him an edge of nine points over 10 time champion Craig Von Dohren who has1490 counters. Von Dohren has two wins while Laubach, on his first full season at Grandview, has not claimed a win. Duane Howard, a five time champion, is third with 1310 points and no wins. Brett Kressley, a two feature winner, is fourth with 1293 tallies followed by Frank Cozze at 1283 points.

In the T.P.Truck Equipment NASCAR Sportsman Brad Grim of Coplay, PA continues to sit on top of the standings with 1280 point. Second spot is held by Brad Brightbill with1263 counters and two wins. Brian Hirthler, a past champion, is third with 1232 points and one win.

Whelan Engineering, a longtime supporter of NASCAR, will be the sponsor of the June 8th doubleheader featuring the action packed NASCAR 358 Modifieds and Sportsman.

On Tuesday, June 11, the first of five of the exciting Thunder on the Hill Series events will be presented. The Jesse Hockett Classic will feature the United States Auto Club (USAC) National Wingless Sprint Tour along with the always popular 358 Modifieds. Racing action will get the green flag at 7:30 p.m.

Another doubleheader show of Modifieds and Sportsman will be the attraction on June 15th and will be seen on a delayed basis on RCN-TV.

And on Saturday, June 22nd the popular Wingless Super Sportsman will make their one and only appearance of the season as part of a three division show that will also include the Modifieds and Sportsman. A challenge has been issued with the N.J. Wingless Crate Sprints being invited to come race with the Super Sportsman. That event will pay $1,000 to win.

Outlaw Enduros and Blast from the Past Vintage racers will be back in action on Sunday, June 23rd at 1 p.m.

And another tripleheader Saturday night show will feature the Mid-Atlantic Sprint Series, their second appearance of the season, along with the Modifieds and Sportsman on June 29th closing out the month of auto racing excitement.

A full schedule of events for 2019 can be found at www.grandviewspeedway.com along with other track information. The track phone number is 610.754.7688.

* denotes feature win (Feature wins listed are only those that are