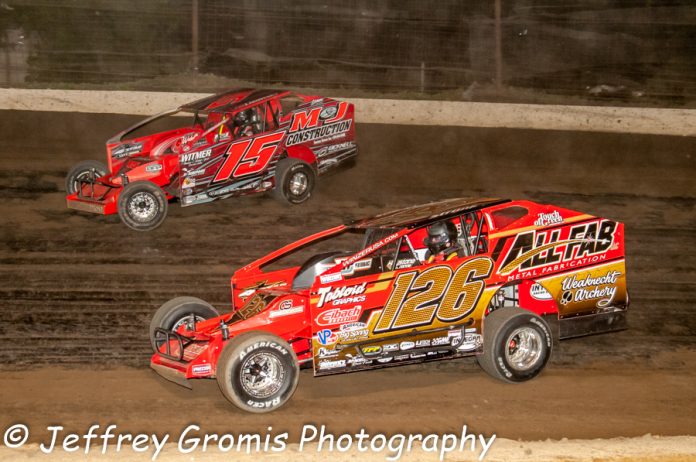 BECHTELSVILLE, PA – Saturday night (June 8) racing action at Grandview Speedway will include three NASCAR feature races. The T.P.Truck Equipment Sportsman will race in two 25-lap features as a result of the rain shortened program from last Saturday. And the T.P.Trailers 358 Modifieds will have 28 of the area’s top dirt track racing talents in action. The night is sponsored by long time NASCAR supporter Whelen Engineering.

“We started out slow. There were mechanical issues and the experimenting with a new rear suspension,’’ said the popular racer. “We have gone back to a traditional set up and are doing much better.”

In recent weeks he has put his #65 Modified (the new number honors his dad who raced the number 65 at the old Moc A Tec Speedway) in front at the end of a couple of qualifying heat races and the last time out, before the rains came, he finished second to five time track champion Duane Howard.

“The car, carrying the main sponsorship of LVPG Orthopedics Dr. Eric Lebby and Dr. Thomas Dibenedetto along with more than two dozen sponsors, is more consistent and that makes me more optimistic as we head into the second half of the season,” commented Walsh. “I believe we can have a good season from here on out.”


He hopes the good season gets started on Saturday night.

Racing action gets the green at 7:30 p.m. with the Sportsman feature rained out last Saturday being the first event of the night. That will be followed by a full slate of qualifying events leading into the 30-lap feature for Modifieds and a second 25-lap feature for the Sportsman.

Gates for spectators open at 5:30 p.m. Adult admission is just $15 while youngsters under the age of 12 are admitted free.

Coming up next at Grandview is the first Thunder on the Hill Series event which will feature the United States Auto Club (USAC) AMSOIL National Tour Non-Wing Sprint Cars topping off their part of the doubleheader show with the $10,000 to win Jesse Hockett Classic. The second part of the night’s racing will feature the 358 Modified stock cars. Adult admission is $30, young people 6 to 11 pay $10 and those really young people 5 and under are admitted free.

Fans are invited to arrive early, 5 p.m. to 6 p.m., and be part of the Low Down & Dirty Meet Greet that will feature Sprint standouts such as Robert Ballou, Isaac Chapple, Tim Buckwalter and Joe Biasi.

Racing on Tuesday night will get the green at 7:30 p.m.

Then on Saturday, June 15th, the T.P.Trailers NASCAR 358 Modifieds will be featured in two 30-lap main events along with a T.P. Truck Equipment Sportsman 25-lapper and there will be a full series of qualifying races.

Full information on racing at Grandview can be had by checking in at www.grandviewspeedway.com, Facebook or telephone the track at 610.754.7688.