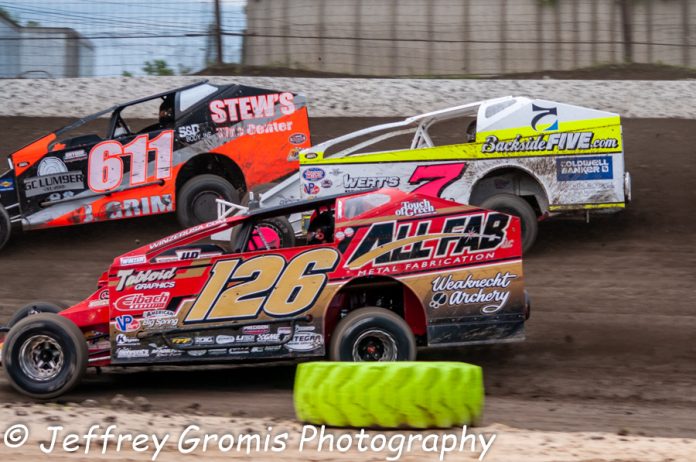 BECHTELSVILLE, PA –  Jeff Strunk gradually worked his way to the front of the pack from his ninth place starting grid until he finally advanced to second.

Kory Fleming, who had a sizeable lead built up, changed the lane he was running previously and this decision was a costly one. It allowed Strunk to reel him in and take the lead away on the 23rd lap. Encountering lap cars in the closing stages, Strunk and the others in tow bid their time to get past them. Strunk went on to score his third 30-lap TP Trailers NASCAR 358 Modified feature of the season. In addition to Strunk, the Modified division has five different feature winners including Matt Sheppard, Brett Kressley, Craig Von Dohren and Duane Howard. More than 40 Modifieds were in action on Saturday night.

Tom Miller came out of retirement after a two-year hiatus and led the 25-lap TP Truck Equipment Sportsman feature from start to finish to chalk up his first ever career victory. The 68-yr. old Gilbertsville resident finally conquered the one thing he wanted to do – win a feature at the 1/3-mile oval and it felt “wonderful” were some of his victory lane comments.

Joe Biasi Jr. led 19 laps of the 25-lap Wingless Super Sportsman feature until Steve Wilbur challenging from the beginning, made contact with him. Wilbur held on to win the 25-lap event with Biasi Jr. a close second. This was the first time the class returned in 31 years.

Providing the Modified and Sportsman feature winners met the necessary requirements, they received monetary awards from TP Trailers and a certificate from VP Fuels for product awards. The Dan’s Deli ½-way hoagie award recipients were Fleming and Miller. Last week’s feature winner Parker Guldin was the highest finisher in the Sportsman feature at 18th with a crate engine to receive and extra $100.


Kyle Kania, missing for a few weeks, wasted no time holding onto the early lead of the Modified feature from the pole position with Fleming, also out of contention for a while; Ron Kline, Brett Gilmore and Louden Reimert in pursuit.

The only caution of the race was when Clay Butler and Craig Whitmoyer tangled in the fourth turn with three laps completed. The restart resulted in a new leader when Fleming overtook the top spot. Reimert, Kline and Briggs Danner completed the order behind Fleming and Kania.

Fleming opened up a comfortable lead while a heated three-way battle for second brewed between Kania, Reimert and Danner.

Back further in the pack Strunk was inching his way to the front and it wasn’t until the 18th lap that he broke into the top five moving up closer as the race progressed.

For some reason, Fleming changed the line he was running which allowed the competition to reel him in.

By the time Fleming switched the groove, Strunk caught him to put his bid in the first.

The lead changed on the backstretch as the field crossed the line to complete lap 23 Strunk had the Keystone Racing No. 126 in first.

Strunk never faltered and chalked up his Saturday night 72nd career win. Chasing the ten-time Modified point champion across the line for their season best finishes were Fleming and Danner with Kevin Hirthler and Reimert completing the top five.

The Sportsman feature saw Miller get the jump on polesitter B.J. Joly to set the pace in his 6-cyl. Powered No. 77T.

Dicing for positions behind Miller were Nate Brinker, Joly, Sean Weiss and Brad Brightbill, who started 12th and by the second lap was fifth. Brad Arnold soon joined the mix to try to get into the top five.

With 11 laps in the books and Miller continuing to set his rapid pace, he encountered slower moving traffic, but that didn’t deter him as the distance continued to grow.

Positions were constantly changing behind Miller with second through fifth now comprised of Brinker, Brightbill, Bachman and Arnold.

Miller never looked back once he was in front and went on chalk up a well-deserved victory trailed by Brinker, Brightbill, Bachman and Arnold.

As the race progressed, the order was now made up of Biasi Jr., Wilbur, Bill Brian Jr., Beasley and Steve Drevicki.

Chris Henry brought out the final caution of many when he stopped along the homestretch with a trail of fluid coming from his car on the 19th lap. Biasi Jr. held his own on the restart with Wilbur trying feverishly to pass him.

With five laps to go, Biasi Jr. and Wilbur made contact and Wilbur was now in first.

Wilbur never looked back and went on to win the event trailed by Biasi Jr., Brian Jr., Drevicki and Beasley.

Next on the Saturday night NASCAR schedule is a tripleheader show of T.P.Trailers NASCAR 358 Modifieds, T.P.Truck Equipment Sportsman and a second 2019 appearance for the Delaware Auto Exchange Mid-Atlantic Sprint Series. Racing on June 29 gets the green flag at 7:30 p.m. Adult admission is $18, youngsters 6 through 11 pay just $5 and kids under 6 are admitted free.

Coming up on Saturday, July 6th is the annual Firecracker 40 which this year features the Sportsman with the feature winner walking off with $2,000. The 358 Modifieds will be the second part of the doubleheader Holiday show.