BECHTELLSVILLE, PA –  Craig Von Dohren, eliminated from last week’s feature, redeemed himself on Saturday night at Grandview Speedway. The Oley, PA lead foot started 16th and cautiously worked his way to the front behind the wheel of the Pioneer Pole Building/Keith Harring Transportation No. 1C in the activities broadcast by RCN TV, Allentown.

By the halfway marker he was third battling with the Strunk brothers Jeff, second and Glenn in the lead. The ten-time point champion made a daring move for the top spot. He shot under Jeff, who was committed to the outside and then powered the Nick Gatto Engine car around Glenn coming off the fourth turn for the lead on the 16th lap.

Von Dohren maintained his composure and went on to chalk up his fourth win of the season in the TP Trailers 30-lap NASCAR 358 Modified feature.

Jack Butler, denied victory in the Firecracker 40-lap Sportsman feature several weeks ago, was determined not to let anyone stop him this time. When leader Jesse Landis and Butler came out of the fourth turn, Butler was on a mission and moved to the high side in an attempt to become the new leader. It was a successful move and he was now first on the 19th lap.

Butler remained the leader of the T.P. Truck Equipment NASCAR Sportsman 25-lap feature the rest of the way and collected his second win of the season.


Providing the feature winners met the necessary requirements, they received monetary awards from T.P. Trailers and a certificate from VP Fuels for product awards. The Dan’s Deli ½-way hoagie award recipients were Glenn Strunk and Landis. Parker Guldin, who finished 16th in the Sportsman feature received an extra monetary bonus from the track for using the first crate engine.

Bobby Gunther Walsh was off and running at the onset of the Modified feature with Glenn Strunk, Justin Grim, Jordan Henn and rookie and one time feature winner Dylan Swinehart in pursuit.

Gunther Walsh distanced himself from the field within a few laps, but by the tenth lap G. Strunk reeled him in.

John Willman regrouped the field when he slowed his pace on the 12th lap to bring out the first yellow. On the restart G. Strunk became the new leader with J. Strunk and Von Dohren following through for second and third respectively as Gunther Walsh fell to fourth.

It was the 16th lap Von Dohren made a bold move and passed the Strunk’s to take over first.

Gunther Walsh’s fine run ended on the 19th lap when he stopped in the third turn out of contention for the caution. It was still Von Dohren and J. Strunk one and two, but by now Brett Kressley, who started midway in the starting field, joined the battle followed by Louden Reimert and G. Strunk.

Once Von Dohren was in first he never surrendered the spot and at the wave of the checkered it was Saturday night career win number 109. Finishing second was J. Strunk followed by Kressley, Umbenhauer and current point leader Duane Howard.

Next week these same drivers plus a host of others including defending race winner Ray Swinehart will participate in the events leading up to the Forrest Rogers Memorial TP Trailers 50-lap NASCAR feature in memory of the man that started it all in 1963.

Tom Miller, who collected his first career win at the track a few weeks ago, led the Sportsman feature for six laps before he went spinning into the backstretch infield and Jesse Landis emerged as the new leader.

Landis and Butler battled for the lead for four laps before Butler shot to the outside of Landis and to the front of the pack on lap 19.

Brightbill overtook second with two laps to go to challenge Butler, but was not able to pass him.

Butler went on to claim his second career victory followed by Brightbill, Landis, Lilick and Esposito.

Big bucks, $10,000, goes to the winner of the Saturday, August 10th Forrest Rogers Memorial, that is a 50-lapper for the NASCAR 358 Modifieds, and ten time track champion Craig Von Dohren will be trying to hold off a large number of challengers as he shoots for his 9th win in the Classic. Modifieds and Sportsman will take part in 49th annual Forrest Rogers Memorial night of racing action. Racing gets the green at 7:30 p.m. Adult admission is $25, youngsters 6 through 11 pay just $ and those under 6 are admitted free. Pit admission is $30.

Free backpacks, just in time for school openings, courtesy of Craig Whitmoyer and Snyder Web Design, will be given away at the Rogers Memorial. Kids must pick up their free tickets Saturday night at the main entrance, right on up until heat races are completed, with five boys and five girls having their lucky tickets drawn at intermission to win the backpacks.

In addition to the backpacks, school kits and activity books, all part of the KIDS DRIVE NASCAR KIT, will be given away at the main gate while supplies last.

Freedom 76 Lap Sponsorships, just $20, are available from Tina Rogers or Tommy Kramer at the track. Lap sponsorships and heat race sponsorships ($200) are available through Ernie Saxton at 267.934.7286 or mail a check to cover the cost of laps and/or heat race to Grandview Speedway, 87 Wilt Road, Bechtelsville, PA 19505. 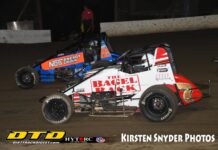