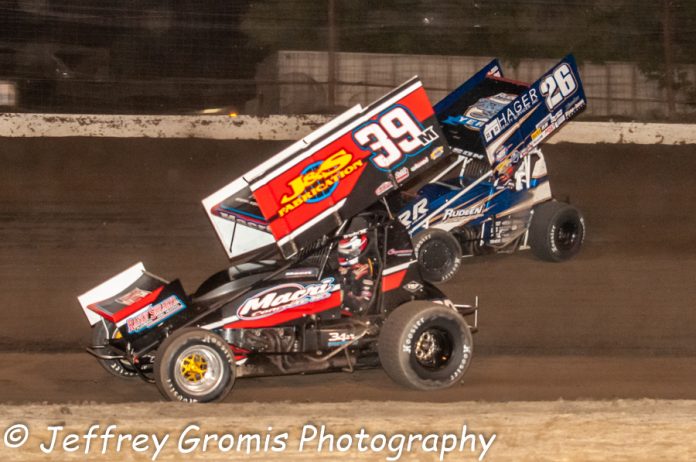 Presented by Levan Machine and Truck Equipment, the Hodnett Cup combines the 410 Sprint Cars in their final 2019 Grandview Speedway appearance – and the NASCAR 358 Modifieds, in an exciting double-header. Gates open at 5:00 PM and racing starts at 7:30 PM.

While the Thursday night event marks the return of the 410 Sprint Cars, and the return of Tony Stewart’s All Star Series, it will also be the Grandview return of 410 racer Ryan Smith.

One of the most popular drivers among fans, ‘The Kunkletown Kid’ was sidelined after and early-July incident at the Selinsgrove Raceway – and consequently missed the Thunder on the Hill Speedweek event. Returning in fine form a few weeks later, Smith set second-fast time at his first event back and has racked up consistent top-10 finishes in subsequent weeks.

However, Smith is still searching for his first NAPA Auto Parts Thunder on the Hill Racing Series win, after coming close multiple times. Most famously in 2017, when the driver challenged Kyle Larson for the top-spot before a late race attempted pass sent him flipping into turn three.


The August 22 event at Grandview is doubly important to the Kunkletown, PA racer. In late 2018, Smith was tapped to pilot the Mike Heffner-owned machine previously piloted by Greg Hodnett – the namesake of the event — who died in a racing incident in Central Pennsylvania.

“Greg was one of my idols growing up,” Smith said in a team release announcing his hiring. “I have huge shoes to fill.”

Tickets for Thursday, August 22 are $30 for adults, $10 for children age 6 to 11, and free for kids under 6. Pit admission is $35 and no license is required. Advanced ticket holder can access the general admission seating at 4:30 PM, thirty minutes before tickets go on sale.

Advanced tickets are available by calling 443-513-4456. Guests may pick-up their tickets and pay for them the night of the event after 3:30 PM. Please leave a message with your name, and the number of tickets you are requesting.

Greg Hodnett collected nine Thunder on the Hill Racing Series wins at the Grandview Speedway – sitting third on the all-time win list. The winner of the event will receive the Hodnett Cup — fabricated from one of Greg’s many trophies, a base was added where names of future event winners will be engraved. As a perpetual trophy, it will be available on race day for Victory Lane celebration, the winner’s name will be added along with the event date, and the trophy will be on display year-round at the Eastern Museum of Motor Racing at the Latimore Valley Fairgounds.

About Thunder on the Hill Racing Series
The brainchild of Grandview Speedway owner Bruce Rogers, special events promoter Bob Miller and local driving star Dave Kelly, the Thunder on the Hill Racing Series celebrates 30 years of the most anticipated events of the racing calendar year after year. In 135 events, over $4.6 million dollars has been divvied up among the area’s fastest racers. What started as a single 410 Sprint Car event in 1990 has blossomed to feature a variety of racing action including 358 Modifieds, USAC Wingless Sprints, All-Star Circuit of Champions, 360 & 410 Sprint Cars, Sportsman, Late Models, Midgets, Legend Cars, DIRTcar and ROC Modified events. The 2019 30th Anniversary Series of Thunder on the Hill is dedicated to Bruce Rogers.