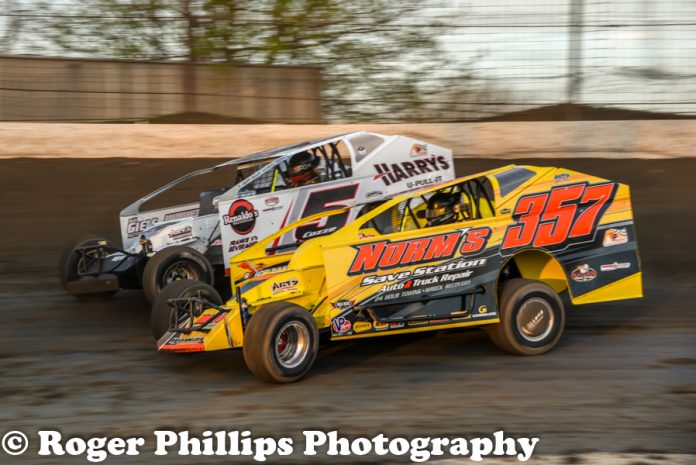 BECHTELSVILLE, PA – With just five point races remaining in the 2019 season at Grandview Speedway five time champion Duane Howard has less than a 100 point edge over ten time titleholder Craig Von Dohren in the chase for the T.P.Trailers NASCAR 358 Modified title. The two Oley, PA racers have each been to victory lane four times this season with Howard taking home $10,000 as the winner of the 49th annual Forrest Rogers Memorial last Saturday. At present he has 3770 points while Von Dohren has earned 3696 points.

In the T.P.Truck Equipment Sportsman division veteran racer Brad Brightbill of Sinking Spring, PA is setting the pace in the championship battle. He has tallied 3167 points and has won three features. He has been a contender in just about every race and now holds almost a 300 point lead over Brad Grim, who sits with 2894 points. Third in the standings is former champion Brian Hirthler with 2881 tallies. Sitting in fourth with 2814 points is Kyle Lilick followed in fifth by Mark Kemmerer with 2586 points.

The big event of the season is set for Saturday, September 21st, with the running of the 49th annual Freedom 76 paying at least $25,000 to win. However this race offers no points toward the championship. By that date the NASCAR track titles will have been decided.

Advance tickets for the Freedom 76 are now on sale. Mail a check or money order covering the number of tickets being ordered to Grandview Speedway, 87 Wilt Road, Bechtelsville, PA 19505. Advance adult tickets are priced at $35 while tickets purchased on race day will be priced at $40. Youngsters 6 through 11 pay $10. Under six are admitted free. Please include a self-addressed envelope to speed delivery. Tickets will not be mailed after September 13.

Coming up next is a doubleheader show of NASCAR 358 Modifieds and Sportsman on Saturday, August 17th. Racing will get the green at 7:30 p.m. with the first of a series of qualifying events topped by a 30-lap feature for the Modifieds and 25-laps for the Sportsman. Adult admission is $15 while youngsters under the age of 12 are admitted free. The Low Down and Dirty Meet & Greet will be a family affair with Dylan, Steve and Ray Swinehart in the spotlight starting at 5 p.m. in the main gate area.

On Thursday, August 22nd a Thunder on the Hill Series doubleheader will be presented featuring Tony Stewart’s Ollie’s Bargain Outlet All Star Circuit of Champions 410 Sprints and 358 Modifieds. Racing will kick off at 7:30 p.m.

For additional information check in at www.grandviewspeedway.com, Facebook or telephone the track at 610.754.7688.