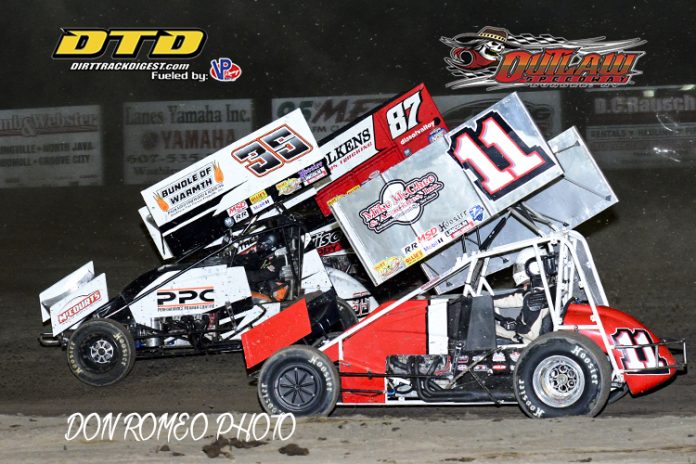 BECHTELSVILLE, PA – Tony Stewart’s Ollie’s Bargain Outlet All Star Circuit of Champions Sprint Car series will invade the Grandview Speedway Thursday night, August 22 joining the NASCAR Modifieds in this always popular Double Header. This event is part of the NAPA Auto Parts Thunder on the Hill Racing Series celebrating its’ thirtieth season at the one-third mile high banked oval. Event sponsor, Levan Machine and Truck Equipment out of Fleetwood, PA will be a big part of the event festivities.

A heated point chase is underway for the All Star Circuit of Champions title with Dale Blaney of Hartford, OH holding a ten point advantage over Aaron Reutzel of Clute, TX. Reutzel is the defending winner of the 2018 Thunder on the Hill All Star sprint event. Cory Eliason of Visalia, CA is third in points followed by Paul McMahan and local Jonestown, PA driver Brock Zearfoss is fifth in the point battle. Locals expected to chase the All Star win include Danny Dietrich, Ryan Smith, Freddie and Brandon Rahmer, Mark Smith, Ryan Taylor, Kyle Moody and JJ Grasso to name a few.

Local favorite Ryan Smith owns eight career wins with the All Stars but is still looking for that first Thunder on the Hill win at Grandview. Smith and others will be looking for this win as they chase the prestigious Hodnett Cup, an actual trophy of Greg Hodnett that annually will honor one of the all-time greats in sprint car racing. Hodnett, a nine time winner and six time Thunder Series Champion at Grandview Speedway lost his life in a racing mishap in September of 2018 in Central Pennsylvania.

Joining the All Star Sprints will be the popular NASCAR 358 Modifieds in this always popular double-header. Jeff Strunk is the winningest driver in Thunder on the Hill history and he will be challenged by Craig VonDohren, Duane Howard, Mike Gular, Rick Laubach, Brett Kressley and Doug Manmiller just to name a few. The modifieds will complete in a series of qualifying events leading up to the 30 lap, $3,000 to win feature event.

Tickets for Thursday, August 22 are $30 for adults, $10 for children age 6 to 11, and free for kids under 6. Pit admission is $35 and no license is required. Advanced ticket holder can access the general admission seating at 4:30 PM, thirty minutes before tickets go on sale.


Advanced tickets are available by calling 443-513-4456. Guests may pick-up their tickets and pay for them the night of the event after 3:30 PM. Please leave a message with your name, and the number of tickets you are requesting.

Greg Hodnett collected nine Thunder on the Hill Racing Series wins at the Grandview Speedway – sitting third on the all-time win list. The winner of the event will be photographed with the Hodnett Cup — fabricated from one of Greg’s many trophies, a base was added where names of future event winners will be engraved. As a perpetual trophy, it will be available on race day for Victory Lane celebration, the winner’s name will be added along with the event date, and the trophy will be on display year-round at the Eastern Museum of Motor Racing at the Latimore Valley Fairgrounds.

About Thunder on the Hill Racing Series
The brainchild of Grandview Speedway owner Bruce Rogers, special events promoter Bob Miller and local driving star Dave Kelly, the Thunder on the Hill Racing Series celebrates 30 years of the most anticipated events of the racing calendar year after year. In 135 events, over $4.6 million dollars has been divvied up among the area’s fastest racers. What started as a single 410 Sprint Car event in 1990 has blossomed to feature a variety of racing action including 358 Modifieds, USAC Wingless Sprints, All-Star Circuit of Champions, 360 & 410 Sprint Cars, Sportsman, Late Models, Midgets, Legend Cars, DIRTcar and ROC Modified events. The 2019 30th Anniversary Series of Thunder on the Hill is dedicated to Bruce Rogers.