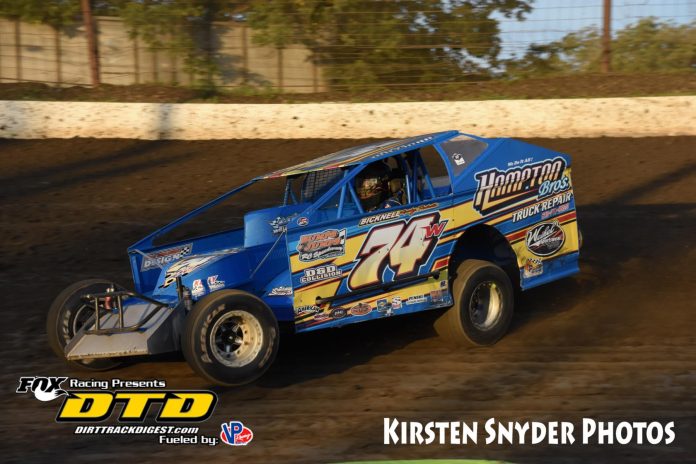 BECHTELSVILLE, PA – John Willman led the past three T.P. Trailers NASCAR 358 Modified 30-lap features, but always fell laps short of being in victory lane at the drop of the checkered.

The veteran racer missed several Saturday nights at the 1/3-mile Grandview Speedway oval due to engine problems or lack of crew help.

The “Ultimate Underdog” hasn’t won a feature since April 3, 2010, but Willman changed the status of that to be the ninth different winner this season in the Modified division. He ran every groove possible once he put the Hampton Bros./Carroll Hine powered No. 74W in front on the seventh lap. No matter which lane runner-up and current point leader Duane Howard ran he couldn’t get around or underneath him for the pass. Not only did Willman have to deal with Howard, Jeff Strunk joined the mix near the end for a three-way battle.

Willman dedicated the win to his father-in-law who is in ill-health and his wife Beth who was not in attendance since she was home with him.

In the TP Truck Equipment NASCAR Sportsman 25-lap feature, 16-year-old rookie Jimmy Leiby, who became a regular competitor with a crate motor in late July, took over the lead on the eighth lap and went on to win his first-ever career victory by holding off a fast closing second place Mike Mammana who gained ground as they approached lap traffic. Leiby is the 14th different winner in the division

Andy Cassel won the 10-lap Modified feature in the Blast From The Past while Rich Decker collected the win in the Vintage division.

Providing the feature winners met the necessary requirements, they received monetary awards from T.P. Trailers and a certificate from VP Fuels for product awards. The Dan’s Deli ½-way hoagie award recipients were Willman and Leiby. An extra $100 went to Leiby for being the highest finishing crate engine driver.

The final NASCAR point races of the season are set for Saturday, September 14 as WNPV-AM Radio Champion’s Night is presented. The T.P.Trailers NASCAR 358 Modifieds and T.P.Trucks Equipment Sportsman racing talents will battle it out for the lucrative championships and top point finishing positions.

Fans will have the opportunity to win pairs of tickets for the NASCAR Monster Energy Cup race, October 6, at Dover International Speedway along with a four pack of “ride all day with coaster” tickets to the popular Knoebel’s Amusement Park, America’s largest free admission park which features the #1 Wooden Roller Coaster in the world, the Phoenix, all courtesy of WNPV.

Biehn while running a solid second, found himself facing the wrong direction in the second turn with Steve Swinehart, left with nowhere to go becoming involved in the sixth lap caution. On the restart Willman charged into first while Whitmoyer followed through for second to challenge. Leiby, Frank Cozze and Howard made it a five-way battle for the lead.

Cozze, who was right in the thick of things in third, stopped in the fourth turn out of contention on the lap 12 restart. It was still Willman showing the way with the top five composed of Whitmoyer, Howard, Strunk and Craig Von Dohren. Trying to get into a top five position was Brett Kressley.

Willman ran the middle, top and bottom portion of the track in anticipation of keeping Howard behind him. Howard had taken over second on the 15th lap and was running the highest path possible to try to become the new leader.

Right behind Willman and Howard, Von Dohren and Whitmoyer were waiting in anticipation for either one to falter and advance a position.

The top five remained the same bumper-to-bumper until Kressley overtook fifth on the 22nd lap.

Despite the struggle to gain a position the order never changed.

Howard made one last ditch effort to dive underneath Willman coming in for the checkered, but it was useless and Willman earned a crowd-pleasing fourth career Saturday night triumph. Howard was a close second trailed by Howard, Von Dohren and Kressley.

Ron Kline, Steve Swinehart, Jesse Leiby and Justin Grim were the heat winners while the consies went to Clay Butler, returning after his barrel-roll along the homestretch a few weeks ago and Timmy Buckwalter.

Steve Young led seven laps in the Sportsman feature before Tom Miller, while running second, spun in the fourth turn. The lead changed hands on the restart when Leiby shot past Young. Mammana followed through for second at the same time.

Within a few laps Leiby opened up some daylight over the rest of the top five that consisted of Mammana, Brad Brightbill the current point leader; Young and Jesse Landis.

Mammana reeled in Leiby, who was caught behind lap traffic, with two laps to go, but he didn’t have enough time and Leiby went on to victory with Mammana, Brightbill, Young and Landis in tow.

Young, Leiby and Miller won the heats. The consi was won by Brad Grim.

Time is running out to sign up for lap sponsorships and heat race sponsorships for the September 21st Freedom 76 are available $20 for laps and $200 for a heat race. Great opportunities to wish your favorite driver well or gain some great exposure for your business. Check in with Tina Rogers or Tommy Kramer at the track. Telephone Ernie Saxton at 267.934.7286 for complete information. Doug Manmiller Electric and Stoudt Auto Sales have signed up to sponsor qualifying heat races along with BFP Specialties and Bashore Trucking while T.P.Trailers and Truck Equipment are sponsoring ten laps. 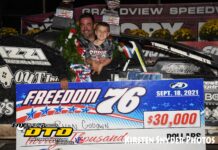