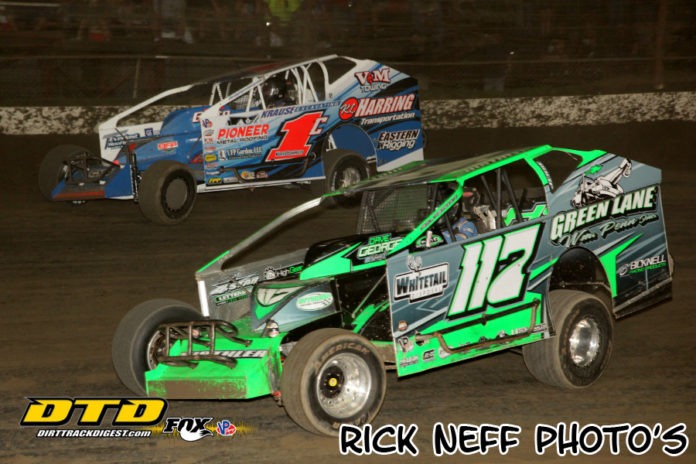 BECHTELSVILLE, PA –  Brad Arnold and Brian Hirthler were rubbing wheels and trading paint as they came in for the checkered on Saturday night at Grandview Speedway, but it was Arnold that came out victorious to win his first Firecracker 40-lap T.P. Truck Equipment NASCAR Sportsman feature for a $2,000 payday.

Courteous of Jim and Missy Bowman 3 Sportsman drivers received American Racer right rear SD-48 tires. Parker Guldin received one for being the first driver to get a right rear flat, Brad Brightbill was another recipient since his 10th place finish was the highest finisher that qualified through the consi and a random draw for second through fifth-place finisher went to fourth place finisher Mark Kemmerer. W*T*Fans (We The Fans) awarded Jimmy Leiby $150 for being the highest crate engine finisher and he also received the weekly award of $100 from the track giving him $250 in bonus bucks.


Swinehart had a slight edge built up over his fellow competitors, but by the tenth lap Leiby erased the margin to challenge him.

The lead changed hands on the 11th lap when Leiby moved to the head of the pack.

While Leiby set the pace, Swinehart, Smith, Arnold and Parker Guldin jockeyed for the remaining positions.

Guldin brought out the first yellow when he stopped in the second turn. Leiby was still in the lead when action resumed, but now Arnold advanced to second to challenge him with Hirthler right on his bumper.

A second turn tangle between John McGovern and Nate Mohr on the 21st lap caused the next caution. On the restart Arnold shot to the outside and into the lead. At the same time Ryan Beltz took over the runner-up spot.

Within no time Arnold had a sizeable lead built up, but that was erased when the red flag had to be thrown after early leader Swinehart flipped in the first turn. He was uninjured, but the car sustained heavy damage. When the race resumed Beltz briefly got the edge on Arnold as the pair raced side-by-side, but when the lap counted it was Arnold still in first.

The race for second soon developed into a heated battle between Beltz, Brian Hirthler and Kenny Gilmore with neither one giving up while Mark Kemmerer held down fifth in hopes of advancing a position.

Gilmore’s solid fourth place run ended on the 36th lap when he pulled into the infield out of contention.

With two laps remaining, a tire came off of Lex Shive’s car bringing him to an abrupt halt in turn two for the final yellow. On the single file restart with Arnold first and now Hirthler second, Arnold wasted no time keeping the Esterly Concrete sponsored mount first, but Hirthler stayed right with him trying to gain control.

Coming in for the checkered Arnold and Hirthler were making contact since Hirthler wanted to make things interesting. Arnold was determined to win and never lifted until he pulled into the winner’s circle for his sixth career win with Hirthler right on his bumper for a close second. Following the pair across were Beltz, Kemmerer and Kyle Lilick. Sixth through tenth were Jimmy Leiby, Kyle Smith, last week’s feature winner Jack Butler, Ryan Higgs and Brad Brightbill.

Before the first lap of the Modified feature could be recorded leader Ron Myers spun right in front of the 28-car starting grid causing a nine car tangle. Dylan Swinehart and Eric Biehn were eliminated while the others could rejoin the action at the back of the pack after several made pit stops. Hirthler, who didn’t even qualify for last week’s show, luckily avoided being involved and inherited the lead and wasted no time keeping the Green Lane/Wm Penn, Whitetail Disposal No. 117 first followed by Ryan Grim, Ray Swinehart, Craig Whitmoyer and Jared Umbenhauer.

Swinehart, who had fallen back to seventh, spun in turn four on the seventh lap for another yellow. It was still Hirthler showing the way on the restart with Umbenhauer, Grim, Doug Manmiller and Whitmoyer in tow.

Positions were constantly changing behind Hirthler who increased the distance between himself and his fellow competitors and chasing him down by lap 20 were Umbenhauer, Manmiller, Tim Buckwalter and Whitmoyer. Trying to get into the top five was Craig Von Dohren, who was involved in the first lap incident and he succeeded in two laps to go.

Hirthler kept his rapid momentum, until the drop of the checkered to chalk up his 13th career win. Narrowly posting his season best finish at the line was Umbenhauer followed by Manmiller, for the second week in a row; Buckwalter and Von Dohren. Rounding out the top ten were Whitmoyer, Duane Howard, Brett Kressley, R. Grim and Louden Reimert.

Myers, Howard and Umbenhauer won the heats. The consi was won by Von Dohren.

Coming up at Grandview on Saturday, July 11th is another excitement filled doubleheader featuring the T.P.Trailers Modifieds and T.P.Truck Equipment Sportsman, both part of the NASCAR Advance Auto Parts Series. Racing starts at 7:30 p.m. Spectator gates open at 5:30 p.m. Adult admission is just $15 and those under 12 are admitted free.

URC Sprints join the Modifieds and Sportsman for a giant tripleheader card of racing action on Saturday, July 18th. 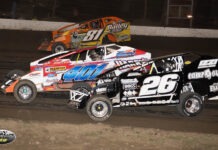 NAPA Auto Parts Thunder on the Hill Racing Series Gears Up for Oct. 16 at Grandview