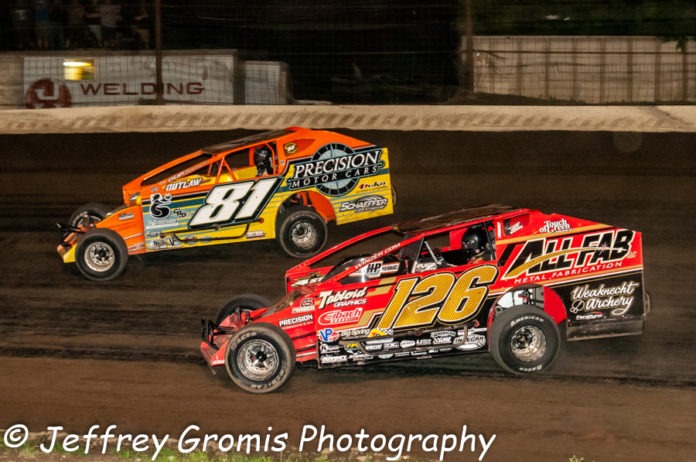 BECHTELSVILLE, PA – The saying it’s not over until it’s over certainly held true for the outcome of the T.P. Trailers Modified NASCAR Advanced Auto Parts 30-lap feature and also the 25-lap T.P. Truck Equipment NASCAR Sportsman feature on Saturday night at Grandview Speedway.

In the Modified feature Jeff Strunk, whose last win came August 31, 2019, appeared to be on his way to victory lane with Tim Buckwalter in hot pursuit. Earlier Brett Kressley was the one on the move running a solid second until contact with the lapped car of Louden Reimert caused him to hit the wall and the axle broke sending Kressley into the fourth turn wall as misfortune continued to plaque him. The single file restart with Strunk first and now Tim Buckwalter second had the pair ending up side-by-side rubbing door handles and neither one lifted since both were determined to win. Buckwalter put the Norm Saxton-owned mount in front on the one lap signal. Still swapping paint Strunk made contact with the back bumper of Buckwalter causing both drivers to spin ending a chance to win. The turn of events put early leader Dylan Swinehart in first and he held on to earn his second career win in the Bailey Fabrications No. 81. The ironic part was he won last year on the same weekend.

Sportsman feature action seemed like a new name – Mike Mammana would be added to the win column, but a lapped car and Brian Hirthler dashed those chances as the current point leader won his second feature to be the first repeat winner in the division.

Providing the feature winners met the necessary requirements, they received monetary awards from T.P. Trailers and a certificate from VP Fuels for product awards. The Dan’s Deli ½-way hoagie award recipients were Strunk and Mammana. Jesse Leiby earned an extra bonus from the track for being the highest finishing crate engine with his third place finish.

Dylan Swinehart, who had two 27th place finishes in the past races, set the pace for nine laps from his second starting grid until Strunk, who started eighth, got underneath him coming out of the fourth turn. Swinehart didn’t give in easily as he stayed right with him trying to regain control.

Within a few laps Strunk began gaining distance over his fellow competitors.

Kressley, took over second on the 15th circuit and took chase after Strunk.

By the 24th lap slower moving traffic allowed Kressley to close the gap Strunk built up and would soon be pressuring him. Unfortunately Kressley made contact with a lapped car which ended his night on the end of a tow truck and the yellow to be thrown. Even though it was a single file restart it didn’t take Buckwalter long to get even with Strunk and the bumping began. After Buckwalter passed Strunk for first and headed into the first turn, Strunk hit the back bumper of Buckwalter and they both went around causing the caution the come out. Quick action on Swinehart’s part while in third, allowed him to inherit the lead.

While Mammana opened daylight, a three-way battle for second ensured between Leiby, Butler and Hirthler which allowed Mammana to pull away even more.

Hirthler took chase after Mammana once he took over second on the 11th lap to try to change the status.

Lapped traffic that the front runners came upon on the 17th lap slowed Mammana’s momentum and now Hirthler was reeling him in.

Mammana and Hirthler were constantly switching lanes as the slower cars made it difficult to get past despite being told via in car radio the leaders were right behind.

The lead changed for the second time with two to go when Hirthler slipped underneath Mammana into first.

Mammana, Kenny Bock and Kenny Gilmore won the heats. The consi was won by Kyle Lilick.

The 3-lap Diamond Disposal Cash Dash sponsored by fellow driver and business owner John McGovern was won by Brad Brightbill for an extra $100. Bock and Mammana each received $50. Brightbill got into the event since K. Gilmore, who won a heat, chose not to participate which allowed runner-up Brightbill a chance to compete.

Next on the schedule at Grandview is an action packed July 18th tripleheader that will feature the United Racing Club Sprint cars, T.P.Trailers Modifieds and T.P. Truck Equipment Sportsman. Expected to head up the action for the Sprinters will such standouts as Josh Weller, Adam Carberry, Curt Michael, Austin Bishop and a host of others.

Fans attending events at Grandview are reminded to practice social distancing. Masks are recommended but not mandatory and if you are not feeling well please consider staying home.