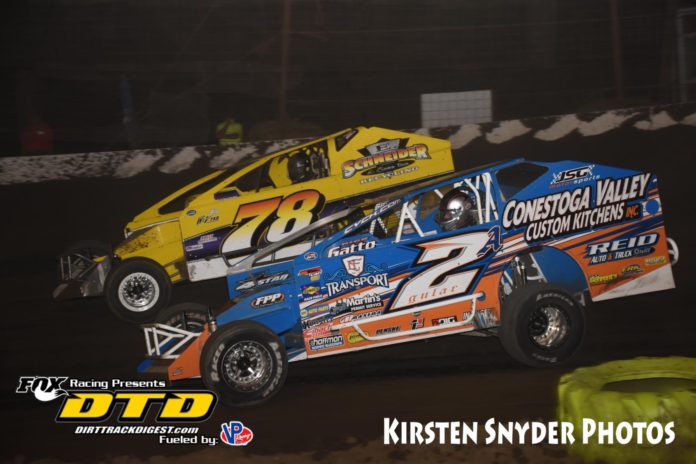 Former track Modified champion Mike Gular, winner of the 2019 Freedom 76, overtook the lead from Justin Grim on the tenth lap restart of the 30-lap Modified feature and finished comfortably ahead of runner-up Grim, who posted his best career finish. It was Gular’s first win of the year at the 1/3-mile oval and his sixth career triumph at the track.

In the 25-lap Sportsman feature Scott Kohler, competing in his sophomore season, inherited the lead when rookie Dakota Kohler pulled into the infield with mechanical problems when his car wouldn’t refire prior to one of the numerous 17th lap restarts. Kohler immediately opened daylight when the race finally went green and went on to score his first career victory by a sizeable margin over second-place finisher Nate Brinker.

Providing the Modified and Sportsman feature winners met the necessary requirements, they received monetary awards from T.P. Trailers and a certificate from VP Fuels for product awards. The Dan’s Deli ½-way hoagie award recipients were Gular and S. Kohler. Jimmy Leiby earned an extra bonus from the track for being the highest finishing crate engine with his seventh place finish in the Sportsman main event.


Justin Grim was the early pacesetter at the onset of the Modified feature followed by Mike Lisowski, Colt Harris, Clay Butler and Gular.

Kevin Hirthler spun in the second turn on the second lap triggering a 12-car tangle as the caution was thrown. Several could rejoin the action after pit stops. Grim held his ground when action resumed and the order remained the same as previously.

Kyle Weiss, while running a solid seventh, came to an abrupt halt in the second turn with engine problems to bring out the sixth lap yellow. It was a three-way battle for first on the restart between Grim, Lisowski and Gular. Behind the trio dicing for the remaining top five positions were Louden Reimert and Jeff Strunk.

Gular had just taken over second when another multi car tangle took place in the first turn for the third yellow with nine laps in the books. On the restart Gular, who has been experimenting with various things this year along with the crew, shot into the top spot when action resumed to become the new pacesetter.

Gular wasted no time pulling away from his fellow competitors while Grim, Lisowski, Strunk and Reimert completed the top five. Craig Von Dohren was right behind waiting for a false move to advance.

While Grim and Strunk jockeyed for second this allowed Gular to open more daylight and pull away even more.

No more restarts were needed to give anyone the opportunity to try to overtake Gular and at the drop of the checkered Gular was victorious followed by Grim, Strunk, Lisowski and Von Dohren. Rounding out the top ten were Reimert, Ryan Watt, Dylan Swinehart, last week’s feature winner; Clay Butler and Craig Whitmoyer.

In the Sportsman feature Scott Kohler was the early leader with pressure from Dakota Kohler, John McGovern, Tom Miller and Nathan Mohr.

The top five running order remained the same until the 15th lap when D. Kohler moved into the lead.

Two laps later Jesse Leiby spun in turn two for the first yellow. After four tries to get the next lap completed it was decided the restart would be single file. Prior to the next attempt D. Kohler surrendered the lead to S. Kohler again since his engine wouldn’t refire. Kohler didn’t hesitate to pull away when action went green again with Brinker, Mark Kemmerer, Brandon Edgar, already a feature winner this season and Parker Guldin in pursuit. Guldin’s mechanical misfortunes continued as he was forced out of competition and pulled into the infield along the backstretch without incident on the 19th lap.

Kohler never gave up the lead and went on to post the triumph. Chasing him across the line were Brinker, Kemmerer, Edgar and Chris Esposito. Sixth through tenth were Brad Arnold, Jimmy Leiby, Kyle Smith, returning from a horrendous flip last week; Ryan Beltz and Decker Swinehart.

Polesitter Josh Weller was off and running at the drop of the green in the URC feature and set a torrid pace until the field was regrouped on the tenth lap when Ryan Stillwagon, a provisional starter, stopped on the backstretch to bring out the yellow. On the restart Carberry, who had just overtaken second the previous lap, outgunned Weller to become the new pacesetter. Derek Locke followed through at the same time to challenge.

Lapped traffic came onto the scene by the 17th lap allowing Locke to close in on Carberry.

The pair with Carberry on the high groove and Locke on the inside, ran side by side, but Carberry still maintained the lead.

Carberry never looked back once he took over first and pulled into victory lane for a well-deserved win. Paulie Colagiovanni was second with Locke third followed by Ryan Taylor and Weller. Troy Betts, Davie Franek, Matt Tanner, Tyler Ross and Curt Michael completed the top ten.

Wingless Super Sportsman racers will be the attraction along with the T.P.Trailers Modifieds and T.P.Truck Equipment Sportsman when Grandview Speedway offers fans an exciting tripleheader show on Saturday, July 25th. And there is no increase in admission with adults paying just $15 and all under 12 being admitted free. Spectator gates open at 5:30 p.m. and pits open at 4 p.m. Racing gets the green flag at 7:30 p.m.

Coming up on Saturday, August 1st is the 50th Annual Forrest Rogers Memorial dedicated to the man who had the idea and then created the one-third-mile, clay banked speedway that has become one of the most successful weekly short tracks in the nation. Modifieds will be racing for $10,000 to win. Sportsman will be the second part of the doubleheader. Adult admission is $25, youngster 6 thru 11 pay just $5 and those under 6 are admitted free.