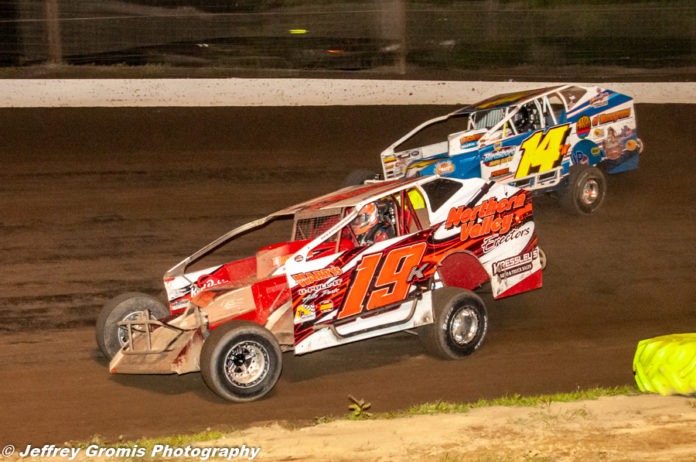 BECHTELSVILLE, PA – Brett Kressley has been having his share of dismal outings at Grandview Speedway this season with his best finish being a fourth place last week. Saturday night “The Threat” turned the tables and went home $10,000 richer by being the first to reach the checkered in the 50th anniversary edition of the Forrest Rogers Memorial the race in honor of the man who founded the track in 1963.

Standing in victory lane after winning the T.P. Trailers Modified NASCAR Advanced Auto Parts event, an emotional Kressley “who commented he used his head,” dedicated the win to his grandfather Willard to whom he was very close and had passed away a few weeks ago. He thanked everyone that helped put the Kressley Auto/Truck Sales No. 19K in the winner’s circle for his first triumph of the current campaign and earn the biggest win of his career.

Providing the feature winners met the necessary requirements, they received monetary awards from T.P. Trailers and a certificate from VP Fuels for product awards. The Dan’s Deli ½-way hoagie award recipients were Kressley and Lilick. Jesse Leiby earned an extra $100 bonus from the track for being the highest crate engine finisher.

Both divisions are part of the NASCAR Advance Auto Parts Weekly Series made up of tracks across the nation.

At the drop of the green by starter Ray Kemp in the Modified main event, second place starter Kenny Gilmore shot past polesitter Carroll Hine III to take the early lead.

The first yellow was out on the third lap when some of the front runners were shuffling positions making contact and through it Rick Laubach found himself in the homestretch wall. Laubach was not happy with the turn of events and left the driver that he felt initiated the incident know it since he was out of competition for the night. Ryan Grim was also a victim and out of the race. Gilmore held his own on the restart, but now Watt was in the runner-up position with Kressley right behind pressuring.

Watt became the new leader on the eighth lap and two laps later Kressley was second putting his bids in for first.

Mike Gular, already a feature winner this year, slowed in the second turn with a flat tire and rejoined the action after a quick pit stop. At the same time defending point champion and 2019 race winner Duane Howard was sent pit side with a broken shock tower. He returned, but was sent back in since it was not fixed to specifications since a driver cannot run with any front end suspension issues. When action resumed Kressley outgunned Watt to take control and show the way for the others.

By the 17th circuit lapped cars were causing the top five that were comprised of Kressley, Watt, Craig Von Dohren, Jeff Strunk and Doug Manmiller to use heads ups driving so as not to make contact with any of them as it got tricky at times.

Von Dohren cleared Watt on the 24th lap and set sail after Kressley with Watt, Strunk and Manmiller in tow.

The top five remained consistent as the race progressed, but they were all after Kressley, who was up to lapping some of the top ten cars.

It appeared Kressley got the monkey off his back and pulled into the winner’s circle for his 13th career win which he proved to be a lucky one, trailed by Von Dohren, Strunk, Watt, Manmiller, Jared Umbenhauer, Kyle Weiss and Craig Whitmoyer, the last car on the lead lap; Louden Reimert and Kenny Gilmore, who were both a lap down.

Two false starts hampered the beginning of the Sportsman feature, but once it did get underway rookie Decker Swinehart was the early leader with Lilick, Jesse Leiby, Dakota Kohler and Cole Stangle jockeying for positions.

Swinehart and Lilick continued to battle lap after lap and neither one gave way since they were both determined to win.

Lilick just got by Swinehart for the lead when the yellow came out for a fourth turn tangle at the ½-way mark.

With Lilick now ahead, Swinehart, Stangle, D. Kohler and Ryan Beltz diced for second through fifth and constantly swapping places back and forth.

Lilick never faltered and went on the chalk up career win number five. Swinehart crossed the line second, however, had a bitter disappointment when carburetor issues caused him to be disqualified. Stangle, Beltz, D. Kohler and Jesse Leiby were second through fifth. Rounding out the top ten were Nate Brinker, Jack Butler, Jimmy Leiby, Brian Hirthler and Brad Arnold.

The chase for the Grandview NASCAR Advance Auto Parts Weekly Series championships continues next Saturday, August 8, with the T.P.Trailers Modifieds and T.P.Truck Equipment Sportsman in action. A full slate of qualifying events leads up to a 30-lap feature for the Modifieds and 25-laps for the Sportsman. Spectator gates open at 5:30 p.m. with racing action at 7:30 p.m. Adult admission is just $15 while youngsters 12 admitted FREE. Check in at www.grandviewspeedway.com for more info.