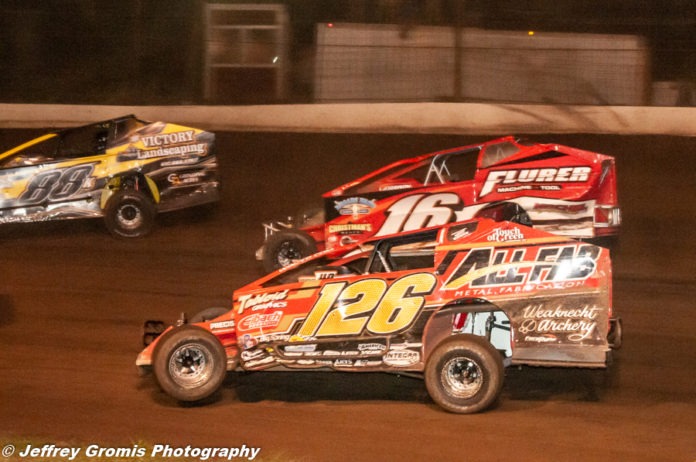 BECHTELSVILLE, PA –  Jeff Strunk, the “Bechtelsville Bullet,” has been running a Teo chassis car for the past several years and had his share of ups and downs which did include several successful campaigns. Saturday night at Grandview Speedway, the Glenn Hyneman-owned No. 126 team unveiled a brand new Bicknell mount that the crew built in a week. It was fast right off the trailer as he started the evening activities with a win in the third qualifying heat. The 10-time point champion started 12th in the 30-lap T.P. Trailers Modified NASCAR Advanced Auto Parts feature and by the 11th lap he overtook Ray Swinehart for the lead. Strunk wove his way through lapped traffic in the later stages and went on to score his first win of the season by a 6.497 margin over runner-up Mike Gular, also a past champion who also received the Hard Charger award charging from 19th to second.

In the 25-lap T.P. Truck Equipment NASCAR Sportsman feature winner Dakota Kohler, who was been close on two different occasions to claiming his first career victory only to be denied, turned the tables and parked his No. 59K in victory lane for his first career win in his rookie season to become the eighth different winner in the division.

Modified and Sportsman feature winners that met the necessary requirements received monetary awards from T.P. Trailers and a certificate from VP Fuels for product awards. The Dan’s Deli ½-way hoagie award recipients were Strunk and Kohler. Kohler also earned an extra $100 bonus from the track for being the highest crate engine finisher. Jesse Leiby was the Sportsman Hard Charger going from 20th to fifth.

In Modified action Ray Swinehart passed Darrin Schuler for the lead on the fourth lap restart that was needed when Kyle Weiss spun in the third turn.

By the fifth lap Strunk advanced to second and was giving Swinehart a run for the money.

The lead changed hands on the 11th lap when Strunk dove underneath Swinehart and into the top spot.

The real battle behind Strunk, who was already weaving his way through lap traffic, was hot and heavy between Swinehart, Duane Howard, Mike Gular and Craig Von Dohren – second, 16th, 19th and 15th place starters respectively.

Gular took over the runner-up spot on the 24th lap which was the same position Swinehart, Howard and Von Dohren were vying for making it a four-way battle to see if anyone could reel Strunk in who was setting a torrid pace.

No more restarts were needed so no one was given the opportunity to try and grab first from Strunk and at the drop of the checkered he christened the new mount with his 74th career win. Chasing him across were Gular and Howard. Before Swinehart could cross the line the car broke ending his fourth place run as he dropped to 11th. Von Dohren and Dylan Swinehart then completed the top five. Sixth through tenth were Jared Umbenhauer, Doug Manmiller, Ryan Grim, Brett Gilmore and Dillon Steuer.

Sportsman action saw polesitter and rookie Mark Gaugler lead for two laps before the red was thrown for a massive homestretch incident which made it look like a parking lot after some of the front runners got jostled around. When action went green again Kohler was at the head of the pack followed by Parker Guldin, Jack Butler, Brian Hirthler, the current point leader and Jesse Leiby.

By the ½ way marker Kohler was way ahead and Butler was now second in pursuit of him.

With two laps to go Butler reeled in Kohler since Kohler was somewhat hampered by the slower traffic and Butler was putting an all-out effort to pass him.

Coming in for the checkered Butler made a valiant effort to grab first, but fell short by 0.147 seconds. Third was Brian Hirthler followed by Guldin, who finally had a change of luck and finished a feature race and Jesse Leiby. Rounding out the top ten were Kyle Lilick, Brad Arnold, Chris Esposito, Kyle Smith and Mark Kemmerer.

Heat winners were Kenny Bock, Hirthler and Mike Mammana. The consi was won by Kyle Lilick.

In the Vintage class that sported how the cars looked years ago, Brett Peters won the event followed by Wes Cassel, Scott Schaeffer, the winner in a previous outing; Jon Lines and Dave Dissinger.

The battle for the NASCAR championships continues on Saturday night, August 22nd, with another action filled doubleheader featuring the T.P.Trailers NASCAR Modifieds and the T.P.Truck Equipment, all part of the Advance Auto Parts NASCAR Weekly Series.

Spectator gates swing open at 5:30 pm. With the first racing event getting the green flag at 7:30 p.m. Adult admission for the tripleheader is just $15 while youngsters under 12 are admitted free. Pit admission with license is $35 and without $40.

Reminder: No NASCAR license is required for crew or fans. Drivers can purchase temporary licenses good for one event or 15 day license.