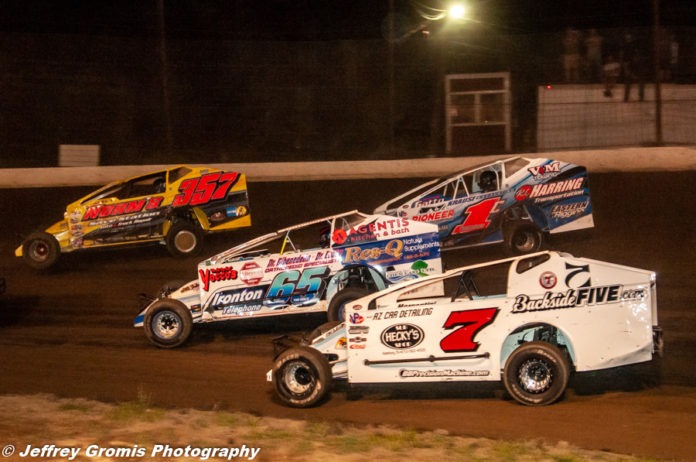 BECHTELSVILLE, PA – A new event, the brainchild of car owner Joe “Geezer” Fanelli, is being added to the doubleheader NASCAR T.P.Trailers Modifieds and T.P.Truck Equipment Sportsman show at Grandview Speedway on Saturday night, September 5th and will be titled “Hard Charger Challenge”.

Featured in the new event will be Modified racers who are not in the top 15 in current point standings and have never won a Modified feature race at Grandview. The 22-lap race will gain additional exposure for the racer and the all-important sponsors. Fanelli has always made his sponsors a priority.

A pill draw during the early evening sign in will set the starting field with no more than 15 cars taking part. The race will take place immediately following the National Anthem. And when the race is checkered, the winner in victory lane, he will receive a specially designed check created by noted artist Joe Adams. The top finisher will have the opportunity to take the last starting position in the Modified feature or he can opt to race in a heat race in an effort to improve on his feature starting position, take the green for the regular prize money and gain some points.

Information on the event is available from Joe Fanelli at 2geezer2@gmail.com or telephone 610.389.1184. Fanelli is also making an effort to increase the payoff for the winner by adding some sponsors/supporters. First place money is already in excess of $222.22 and growing. And interest in the first time event continues to grow.

Adding to the excitement of the night is the fact that this will be the next to last point event of the season for the Modifieds and Sportsman racers.

The champions will be declared when the final point events of the season are presented on Saturday, September 12th.

Closing out the NASCAR season at Grandview will be the two nights of racing set for Friday, September 18th (Sportsman 38 and practice laps for the Modifieds racing in the 50th Annual Freedom 76). On Saturday, September 19th the richest event of the season for the Modifieds is offered with the running of the hugely popular Freedom 76. More information to be announced shortly.

An early notice for those planning to bring campers for the Freedom 76, they will be allowed on the speedway grounds Thursday, September 17th and must be removed by Sunday, September 20.