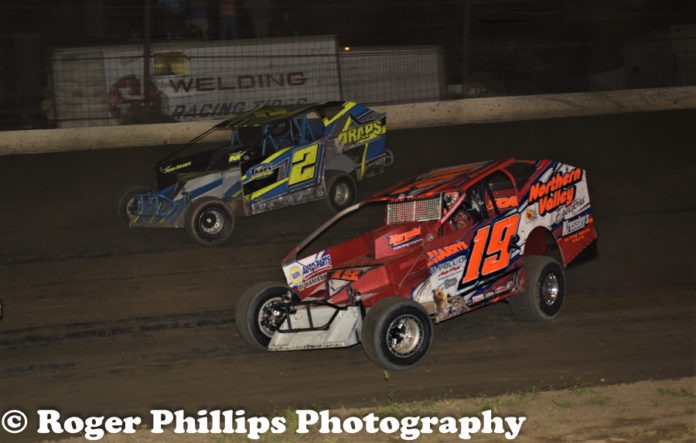 BECHTELSVILLE, PA -Despite a lengthy rain delay, the racing on Saturday night at Grandview Speedway was able to be completed through the diligent work of the track crew and cooperation from the participants.

Eric Biehn came up five laps short of racking up his first 30-lap T.P. Trailers Modified NASCAR Advanced Auto Parts feature career win. Brett “The Threat” Kressley, who started 16th, chased Biehn down through the aid of lap traffic and was able to overtake him to score back to back feature victories.

The 25-lap T.P. Truck Equipment NASCAR Sportsman feature was decided in the closing stages also. Ryan Beltz, kept edging his way to the front and with two laps remaining he passed Steve Young for the lead and went on to capture his first win of the season in the event that went non-stop. Beltz became the tenth different winner of the season in the Sportsman division.

Erik Whitby led all 15 laps of the Excel 600 modified feature and crossed the line first, but was later disqualified. The win was most likely awarded to runner-up Jon Josko but as the speedway emptied Excel officials hadn’t really declared who the winner was.

Modified and Sportsman feature winners that met the necessary requirements received monetary awards from T.P. Trailers and a certificate from VP Fuels for product awards. The Dan’s Deli ½-way hoagie award recipients were Biehn and Young.

Darrin Schuler grabbed the early lead in the Modified feature from his second starting berth in the 28-car lineup to set the pace trailed by Mark Levy, Biehn, Richie Hitzler and Ryan Lilick.

The one and only caution period was brought out on the 11th lap by Jeff Strunk when he slowed his pace with a right rear flat tire. He was able to rejoin the field after a quick pit stop. On the restart Biehn shot past Schuler to become the new pacesetter. The battle for positions behind him was soon hot and heavy between Lilick, Kressley, Schuler and Hitzler.

Lap cars entered the picture around the 22nd circuit which made Biehn use caution to get around them. This situation allowed Kressley to close the distance and overtake second from Lilick on the 24th lap.

One lap later the lead changed for the third time with Kressley at the head of the pack.

Kressley never looked back once he gained control and was in the winner’s circle for the third time. Coming on strong at the end was runner-up and former point champion Mike Gular. Biehn and Lilick finished third and fourth for their best finishes with Doug Manmiller coming home in fifth. Sixth through tenth were Hitzler, Craig Von Dohren, Ryan Grim, Duane Howard and Lauden Reimert.

Ryan Grim, Hitzler, Kressley and Biehn won the heats. The consies were won by Alex Yankowski and Craig Whitmoyer.

Young, who started on the pole, took the lead on the initial start of the Sportsman feature with pressure coming from Tom Miller, Derrick Smith, Kenny Bock and Jesse Landis. Trying earnestly to get into the top five was Jesse Leiby, who was driving Nick Faust’s No. 322 rather than his own No. 9. Leiby succeeded and moved into fifth on lap nine and was on the move.

By the 19th lap Leiby was challenging Young, but in a few laps he lost several positions as he appeared to be developing problems.

Rapidly moving toward the front was Beltz and with laps remaining was second.

It didn’t take Beltz long to get by Young for the lead and Miller followed through for second on the 24th lap.

Whitby led all the laps of the red and yellow flag filled 600 Excel Modified feature. The race was shortened to 15 laps instead of the scheduled 20 due to all the mishaps and Whitby crossed the line first. However he was disqualified and the win most likely ent to second place finisher Josko followed by Corey Sechrist, Matt Warner and Ty Hoke.

Saturday September 5, a rather unique ‘Hard Charger Challenge 22’ will be presented by former racer and car owner, Joe “Geezer” Fanelli for current Modified drivers running at least three races this season, not in the top 15 in points (by 8-29), and have never won a Grandview Modified feature will be eligible.

The first-of-its-kind event will not only boast a $1022.22 payout to the winner, but they will also receive a provisional starting position in the feature event that evening.

It will also carry some extra incentive cash for the competitors finishing in the runner-up and third place positions plus other rewards.

Also included in the activities will be the continuing NASCAR track championship battles for T.P. Trailers Modifieds and T.P.Truck Equipment Sportsman with action set to get under way at 7:30 p.m.