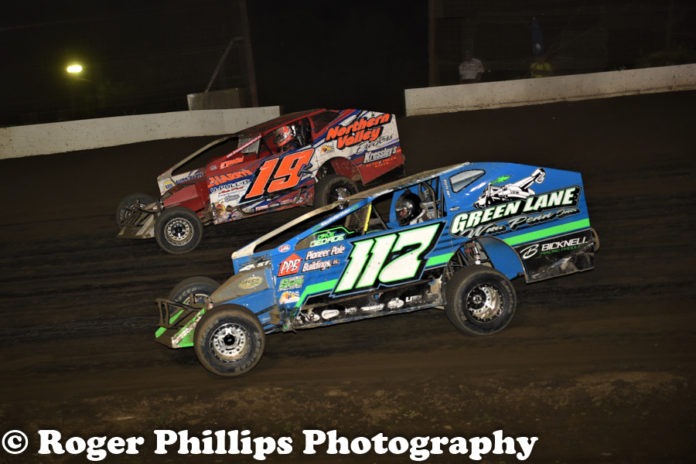 BECHTELSVILLE, PA – Kevin Hirthler tallied up his third 30-lap T.P. Trailers Modified NASCAR Advance Auto Parts feature win of the season on Saturday night at Grandview Speedway when he passed his father-in-law Ray Swinehart on the 21st lap and was able to hold off ten time track champion Jeff Strunk and then runner-up Dillon Steuer for the win. Even though Hirthler has won features this year he has struggled with mechanical and other issues and he assured the fans in victory lane that he has not been “sandbagging” or wrecking just to get a better starting spot.

Tom Miller has been close on numerous occasions to win a 25-lap T.P. Truck Equipment NASCAR Sportsman feature, but was never able to find his way to the winner’s circle for one reason or another. He finally turned the tables around and held off the challenges of Kyle Smith for the last ten laps of the event for his first win of the year.

The 22-lap Hard Charger Challenge feature, a special event for racers who had not won a Modified feature race at Grandview before or were not in the top 15 spots in the Modified point standings was won by Ryan Lilick earning the young racer $1,022. The event was put together by former car owner and driver Joe “Geezer” Fanelli. In addition to the Joey Adams custom created check Lilick was given the opportunity to start the 30-lap Modified feature in last or to try for a better spot in a heat race. Lilick, a Sportsman regular, chose to run in a qualifying heat and won giving him a better feature starting spot.

Feature winners that met the necessary requirements received monetary awards from T.P. Trailers and a certificate from VP Fuels for product awards. The Dan’s Deli ½-way hoagie award recipients were Swinehart and Scott Kohler. Kyle Smith received an extra bonus from the track for being the highest finisher with a Sportsman crate engine. Several cash and product awards went to competitors in the Challenge event courtesy of a variety of sponsors.

Ray Swinehart was the early leader in the Modified feature with grandson and already a feature winner this year Dylan Swinehart, Mike Lisowski, Kyle Weiss and Hirthler in pursuit.

The red had to be thrown on the fourth lap after Doug Manmiller tooked a violent flip along the homestretch coming to a rest on the catch fence. He was uninjured, however, the car was destroyed. Also eliminated since they were left with nowhere to go were Richie Hitzler and back-to-back feature winner Brett Kressley. When action resumed Swinehart was still first with Weiss, Hirthler, D. Swinehart and Steuer completing the order.

Rich Laubach slowed on the 15th lap with a flat to bring out the caution. D. Swinehart and Weiss, running second, dropped out with mechanical issues. The pacesetter continued to be Swinehart on the restart.

The lead changed for the second time on the 18th lap when Hirthler put the Dave George powered Bicknell mount, Green Lane/W Penn No. 117 at the front of the pack. Swinehart didn’t surrender easily and stayed right with Hirthler running the inside trek while Hirthler ran high.

Swinehart’s chances of winning diminished when he hit the second turn infield tire and spun on the 22nd lap. Now behind Hirthler on the restart were Steuer, current point leader Craig Von Dohren, Craig Whitmoyer, who along with the crew really had their work cut out for the night after he hit the wall with heavy impact in warmups but he returned and in a challenging spot and Duane Howard.

Louden Reimert and Carroll Hine III created the last yellow on the 23rd lap after a third turn spin. At the same time Howard relinquished fifth with a flat, but returned and finished tenth.

Hirthler continued his momentum and went on to win his 15th career feature. Steuer was second for his best finish trailed by Strunk, Von Dohren and Whitmoyer. Sixth through tenth were Mike Gular, Justin Grim, Jared Umbenhauer, Ryan Grim and Duane Howard.

Scott Kohler was the early leader of the Sportsman feature in search of his second win.

Just as Miller closed in on S. Kohler, D. Kohler hit the second turn equipment tire and spun on the 14th lap bunching the field together. Miller overtook S. Kohler who started to lose positions as K. Smith, Nate Brinker, Stangle and Brad Arnold got by.

The red was thrown when Mike Laise, who returned to action after an absence, hit the third turn wall with heavy impact. He was uninjured, but the car was badly damaged. Miller was still in the number one position when action went green again.

Miller kept the competition behind him and went on to post his second career victory in which he thanked his sons for all their help and commented he was going to go relax and enjoy finish. Following him across the line were K. Smith, Stangle, Brinker and Arnold. Kyle Lilick, Brian Hirthler, Ryan Beltz, Mark Kemmerer and Nathan Mohr rounded out the top ten.

In the Hard Charger Challenge Richie Hitzler set the early pace with Bobby Gunther Walsh challenging. Joe Funk III had mechanical problems and came to a stop on the homestretch bringing out the caution. On the restart Lilick jumped in front of the pack and set the pace for the balance of the 22-lap event. Hitzler held on for second followed by Dan Waisempacher, Eric Biehn and Bobby Gunther Walsh.

Saturday, September 12 will have the final NASCAR Track championship event pf the season being presented. Currently at the top of the leader board in the Modified division is ten-time champion Craig Von Dohren while former Sportsman champion Brian Hirthler leads the way in that class. The Hope Mortgage Team, which sponsors Sportsman drivers B.J. Joly and Lex Shive will present an extra $1,000 to the Modified and Sportsman feature winners. Both classes will have a Cash Dash, a Hard Charger and Hard Luck recipient with action set to get underway at 7:30 p.m. Adult admission is $15 while youngsters under 12 are admitted free.