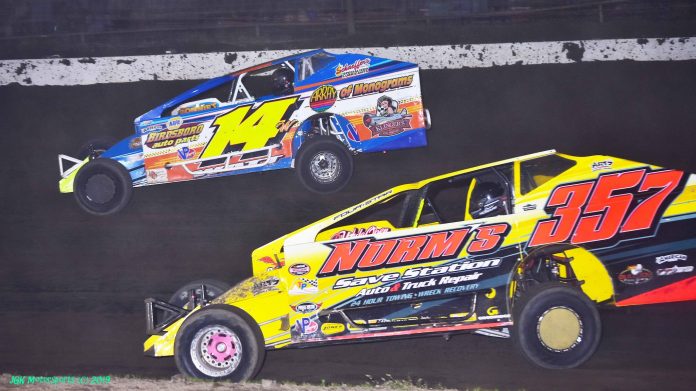 BECHTELSVILLE, PA – Eddie Mumford won the first Freedom 76 Modified Classic back in 1971 and Mike Gular won the last one in 2019. It is anyone’s guess as to who will walk off with the trophy and the $35,550 pot of gold as winner of the 50th Annual Freedom 76 taking place at Grandview Speedway on Saturday, September 19th.

Quite an impressive list of racing talents are expected including two of the winningest Modified talents in the sport, Stewart Friesen and Matt Sheppard. Friesen, a Freedom 76 winner in 2014, also spends his time racing on the NASCAR Truck Series circuit and will be coming from the Thursday night race at Bristol Motor Speedway. Rising star Billy Pauch, Jr. (his father a six time winner) is entered as is Bobby Varin, Mike Maresca, Ryan Godown and a host of other visitors.

Track champion Craig Von Dohren will be seeking his sixth win, his first one coming in 1985. Jeff Strunk is a seven time winner while Duane Howard has five wins. Ray Swinehart, another past winner, will be looking for another victory as will Meme DeSantis, a three time winner.

A long list of Grandview regulars and visitors will be filling the pits as they try for a qualifying spot in the Classic, 76 laps around the one-third-mile, banked clay track.

The weekend kicks off with the action packed Freedom 38 for Sportsman stock cars paying the winner of the 38-lapper $3,550. This race is also expected to attract many visitors to test their skills.

Also on Friday night, action starting at 7:30 p.m., the Modified racers planning to participate in the Freedom 76 will be given practice time during the evening’s events.

Adult admission is $15 with youngsters 6 through 11 paying $5 and kids under 6 admitted free. Pit admission for Friday is $35 and there is no license required.

Tickets for the Freedom 76 will sell for $40. Youngsters, 6 through 11, on Saturday will pay $10 while kids under 6 are admitted free. Pit admission will be $45 with no license required. There are no advance tickets being offered.

Saturday will see pit gates open at 9 a.m. Ticket windows open at 3:00 p.m. Fans will be able to enter the speedway at the first turn and fourth turn spectator gates to reserve seats with blankets between 9am and 12noon.

On track action will get started at 7 p.m. as top Modified racing talents participate in qualifying events, the $1,000 to win Kirsten Snyder Web Design & Photography Cash Dash, the Schaffer Racing Minuteman 20 and top it all off with the 50th edition of the Freedom 76, “The Granddaddy of Modified Stock Car Classics”.

A large amount of lap money will be divided amongst lap leaders during the big race and the racer gaining the most positions during the 76 laps will receive $500 from Bobby Gunther Walsh and his sponsors as the Hard Charger.

Competition Carburetion Fast Lap of $50 will be awarded Friday, Sept. 18 for the Freedom 38 and for the Saturday September 19th Freedom 76.

All winners are entered into a random drawing at the end of the season for a Grand Prize of $500.00

Freedom Fest will take place from 10 AM to 12 NOON on Saturday in the first turn pavilion area and will feature music by Maddie Pearl. Race cars driven by Ryan Grim, Colt Harris and Dylan Swinehart will be on display.

Bob Hilbert Sportswear will present a jacket to the winner of the Freedom 76.

Information can be had at www.grandviewspeedway.com or telephone 610.754.7688.