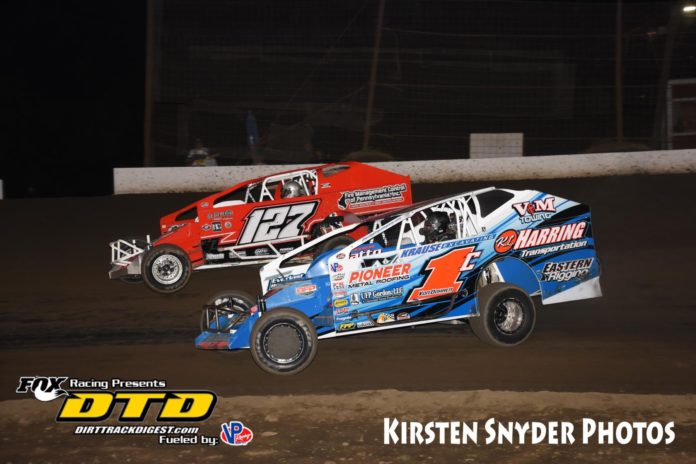 BECHTELSVILLE, PA – With just one feature win scored by each Craig Von Dohren and Brian Hirthler were able to use consistency to earn the Grandview Speedway NASCAR Advance Auto Parts Weekly Racing Series titles. Von Dohren, who calls Oley, PA home, earned the T.P. Trailers NASCAR Modified title for the 11th time with his first being earned in 1988. Brian Hirthler of Green Lane, PA was tops in the T.P.Truck Equipment Sportsman division, a title he won once before back in 2017.

Due to the Covid issues only 12 feature races, counting toward the point championships, were presented during the season but Ma Nature did not force any of the Saturday night events to be cancelled.

With a total of 3153 points Von Dohren topped defending champion Duane Howard who also won a feature and was able to tally 2906 points. Doug Manmiller grabbed third with 2694 followed by Jared Umbenhauer at 2691 and rounding out the top five was 10 time champion Jeff Strunk with 2669 points. Kevin Hirthler and Brett Kressley were each able to win three features. A total of 50 racers earned points.

In the T.P.Truck Equipment Sportsman division Brian Hirthler earned 2258 points with one feature win to his credit with the Alpine Truck Repair entry to grab the championship. The Green Lane, PA racer edged out Brad Arnold by just five points. Others who finished close to the champion were Ryan Beltz with 2230 counters, Kyle Lilick earned 2227 points while Jack Butler tallied 2114. Close to 60 racers competed in the Sportsman division with only Kyle Lilick winning more than once.

The season opening VP Fuels 3rd Annual Bruce Rogers Memorial had Tim Buckwalter topping the field of Modifieds while Brian Hirthler won in the Sportsman. Jeff Strunk took home $35,550 for his win in the 50th Annual Freedom 76 while Kevin Hirthler won the Freedom 38 for Sportsman. These events were not point events and did not count toward the NASCAR Advance Auto Parts Weekly Series titles.

Coming up at Grandview on Sunday, November 8th is the annual Fall Racers Flea Market starting at 7 a.m.

Fans and racers can pencil in Saturday, March 27th for the annual free-to-the-public practice session that is planned as a kick off for the 2021 season which will be the 59th consecutive season of stock car racing at the Rogers family operated Grandview Speedway.

The two biggest events each season are already on the 2021 calendar with the 4th Annual Bruce Rogers Memorial set for Saturday, April 3 and the 51st Annual Freedom 76 Classic on the schedule for Saturday, September 18th.

As plans are made for 2021 it is a good time for area businesses to be in touch so they can gain the benefits of sponsorship at NASCAR sanctioned Grandview Speedway. Contact Ernie Saxton at esaxton144@aol.com or telephone 267.934.7286.