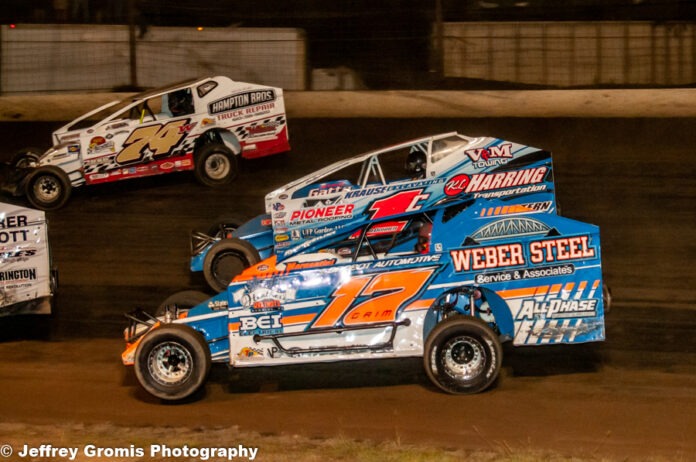 BECHTELSVILLE, PA – Will this be the season in which Bobby Gunther Walsh earns his first feature race victory? The popular WAEB-AM radio personality is optimistic that after 27 years of racing his first feature win will come this season. He has tallied 100 wins (estimated) in qualifying events at a number of tracks including NASCAR sanctioned Grandview Speedway. “And nothing would make me happier than being able to win the 4th Annual VP Race Fuels Bruce Rogers Memorial at Grandview on Saturday, April 3,”said Walsh. The 50-lapper pits Big Blocks against Small Block Modifieds, many of the top talents, with $7,500 going to the winner.

The Rogers Memorial is special to Bobby as he and Bruce along with the Rogers family had become close over the years. When Bruce was in need of medical assistance Bobby was able to make it happen through some of his contacts.

And important reminder to all racers American Racer tires will be available for purchase Tuesday and Thursday evenings 6:30PM to 7:30PM at Tina Rogers home at 72 Wilt Road, Bechtelsville and at BFP Specialties in Bethel, PA. Unfortunately at present there are no #44 Right tires available. Tires will also be available at the track each Saturday during the season after pit gates have been opened.

Walsh, with his numerous sponsors in place, will be testing his equipment, a 2019 Bicknell Modified powered by Outlaw Engines, at the free-to-the-public practice session at Grandview on Saturday, March 27th starting at noon. This will give fans a chance to see what Bobby will be wheeling each Saturday during the season on the one-third-mile, banked clay speedway. Pit admission is $35 with pit gates open at 10 AM.

Crew help for Bobby comes from Greg “Speedy” Saeger who is responsible for preparing the race car. At the track additional help comes from Paul Rupert, Randy Miller and Joe Walsh. He is quick to point out his racing would not be possible without the hard work of Saeger and the crew.

Though he has yet to win a feature race he has some events that have been special to him including his win in a Non-Winners Feature when his dad was able to join him in victory lane. And there was the night he held off four of Grandview’s top talents for the final three laps to win a qualifying event.

The WAEB-790 AM radio personality continues to be the number one on air personality at the Allentown radio station in the Lehigh Valley area. He has been a fixture behind the microphone for close to 40 years and his show can also be seen on Service Electric Cable TV and Blue Ridge Cable. He is active with several charities including his favorite Animals In Distress which raised $212,000 last year despite the pandemic. There was $75,000 raised for the Folds of Honor last year, a record. The annual Christmas Party For The Children’s Home of Easton was able to produce $185,000 last year. And there are others.

Bobby continues to support other events and charities and serves as MC for many.

Walsh continues to be one of the most popular racing talents seen in action on the one-third-mile, banked Grandview Speedway oval each Saturday night throughout the season. When the events are over it is not difficult to find Walsh at his race car in the pit area as there is always a long line of fans visiting with him and collecting some of the free items provided by his many sponsors that he gives away.

The veteran racer would love to earn that first feature win this season at the NASCAR sanctioned racing facility. “I get a great deal of personal satisfaction out of racing, driving the race car, the challenges there are and just being out there racing against so many great talents, “said the Orefield, PA resident.

As indicated Bobby Gunther will be kicking off his 27th season of racing with the Fourth Annual VP Racing Fuels Bruce Rogers Money Maker Memorial at Grandview which rewards the winner with $7,500 and the prestige of winning a race named after the late popular track owner.

Adult admission for the Rogers Memorial is $30 while pit admission is $40. Pit gates will open at 2 PM.

Racers planning to compete at Grandview should make arrangements to bring their own fuel until a new fuel supplier is contracted.

A Big Car and Small Car Enduro, Junk Yard Enduro and Vintage racing along with a Mechanics Enduro is set for 1 p.m. on Saturday, March 20.

The complete schedule of Grandview events for 2021 can be found at www.grandviewspeedway.com. The track telephone number, for information, is 610.754.7688.