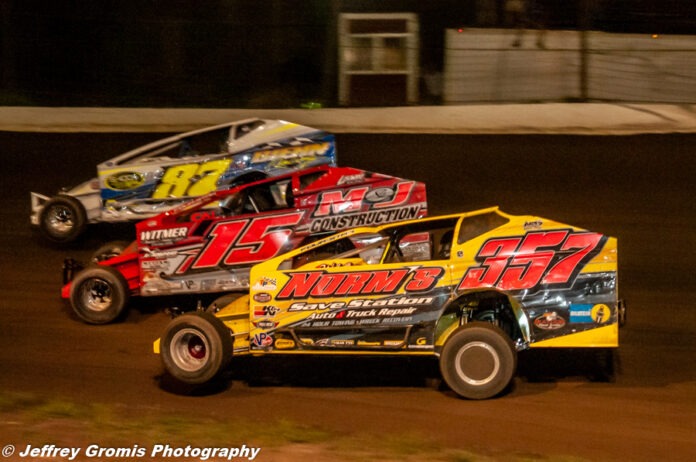 BECHTELSVILLE, PA – Practice, practice and more practice. That is what will be taking place at Grandview Speedway on Saturday, March 27th starting at 12 noon. That is what makes race teams’ better and great race teams even greater. Fans will be able to catch the practice session featuring many Grandview Speedway regular in the T.P.Trailers Modifieds and T.P. Truck Equipment Sportsman stock cars along with visitors featured in a variety of different racecars. And it is all free for the fans.

And the fans coming out on March 27 will not only get to see what some of their favorites will be driving but they will also be able to choose their seat for the season and purchase a season ticket that will be good for every Saturday event all the way through until the 51st Annual Freedom 76 Classic presented in late September. Season tickets are priced at $350 each.

Pit gates will open at 10 a.m. for race teams. Racers are reminded to bring their own fuel until a new supplier can be secured. Tires will be available 6:30 p.m. to 7:30 p.m. each Tuesday and Thursday at 72 Wilt Road, Bechtelsville, just a short distance from the track.

Once the practice is complete all attention will turn to the 4th Annual VP Race Fuels Bruce Rogers Memorial Money Maker on Saturday, April 3. The series of qualifying events leading up to the 50-lapper will pit the best Small Block and Big Block Modified talents against each other in the battle for the $7,500 first prize money along with have the prestige of taking home the winner’s award named in honor of the late race track owner and promoter Bruce Rogers.

Just for the Rogers Memorial on April 3 racers will be able to buy VP Racing Fuel at the track and also will find American Racer tires available. Pits will open at 2 p.m.

Each racer making the starting field for this event will earn at least $1,000.

In addition the Sportsman racers will be featured in their own exciting feature event.

Adult admission for the Classic is set at $30 with youngsters aged 6 through 11 paying $10. Kids under 6 will be admitted free. Pit admission, no NASCAR license required, is $40. Main gate opens at 5 p.m. Rain date is April 10.

The official opening of the NASCAR Advance Auto Parts National Weekly Series featuring the T.P. Trailers ModifIeds and T.P.Truck Equipment Sportsman as they chase the lucrative NASCAR and Track titles will take place on Saturday, April 10th starting at 7 p.m. Oley’s Craig Von Dohren will be chasing after his 12th track title.

Adults will pay just $15 for a ticket for the full night of racing featuring an exciting lineup of qualifying events and features for both divisions. Young people 12 and under are admitted free.

A complete schedule along with information is available at www.grandviewspeedway.com or telephone 610.754.7688.