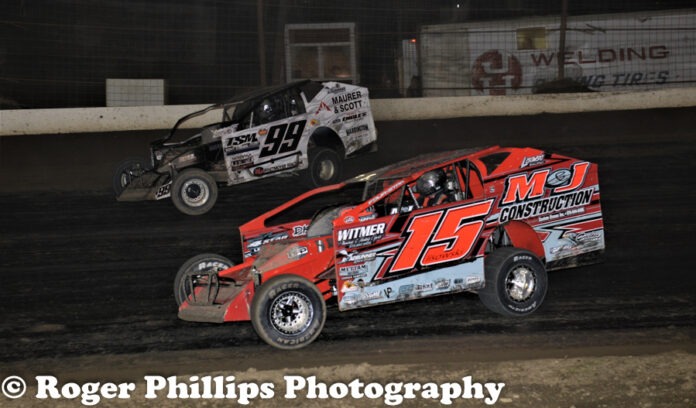 BECHTELSVILLE, PA – Excitement fills the air at Grandview Speedway as a star studded array of racers is expected to take part in the 4th Annual VP Race Fuels Bruce Rogers Memorial Money Maker pitting the best Big Block Modified talents against the best of the Small Block Modified racers in the 50-lapper that rewards the winner with $7,500 and the prestige that goes with winning the race honoring the memory of the late track owner and promoter. All those that qualify for the Money Maker will earn at least $1,000. It all happens on Saturday, April 3, with a 7 p.m. starting time and includes a full show of Sportsman racing.

A full slate of qualifying events will lead up to the features in both divisions.

Adding to the excitement is the announcement by American Racer Tires that they will be adding $1,000 to be divided equally amongst four drivers that are not fortunate enough to make the Rogers Memorial starting field. Those chosen for the $250 cash awards will be by luck of the draw.

Officials are also reminding racers and car owners that they should go to www.grandviewspeedway.com to print out a W-9 form, fill it out and bring it to the track pit office. The form must be provided to officials in order to participate in the pit drawing.


Racers are reminded that there is no license required for this non-point event and there is no entry fee. Rules for the Rogers Memorial can be found on the track website. Pit admission is $40 with pits open on race day at 2 p.m.

VP Race Fuels will have fuel on site and American Racer tires will be available.

Rain date is Saturday, April 10. If the rain date is not needed then a doubleheader show of T.P.Trailers Modifieds and T.P.Truck Equipment Sportsman will kick off the 2021 season of NASCAR Advance Auto Parts Racing Series action. Racing will start at 7 p.m. Adult admission is $15 while youngsters 12 and under are admitted free.