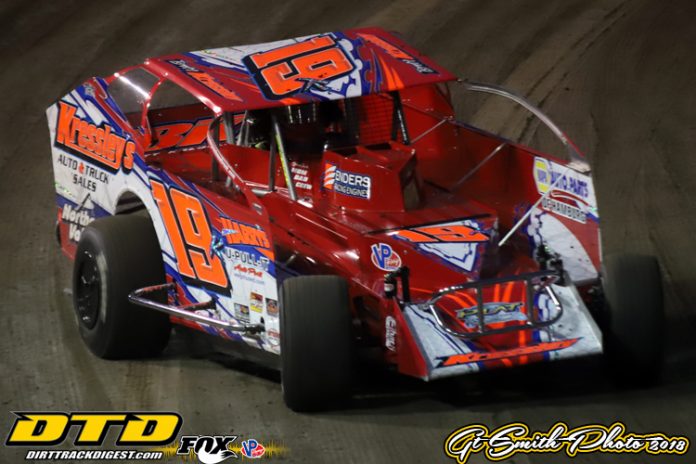 BECHTELSVILLE, PA – Brett Kressley sits on top of the Grandview Speedway NASCAR Advance Auto Parts Weekly Series point standings leading the T.P. Trailers Modifieds while Brian Hirthler leads the T.P.Truck Equipment Sportsman. Both are on top of the standings as a result of being opening night feature winners.

Kressley, a former Sportsman champion, has 308 counters to top the 39 drivers that took part in the first official point event of the season. Craig Von Dohren, 11 time track champion and the defending champion, is second with 296 points. Ryan Grim holds down third with 290 followed by six time champion Duane Howard who has earned 279 points. Howard was the winner of the VP Race Fuels Bruce Rogers Memorial, a non-point event, run back on April 3rd. In fifth spot is Kevin Hirthler with 270 points.

In the Sportsman class Brian Hirthler, a two time and defending Sportsman champion, is on top of the standings with 259 points topping 34 point earners during the opening night racing. Second spot is held by Brandon Edgar with 250. In third is veteran racer Kenny Gilmore having earned 240 points. Fourth spot is held by Ryan Beltz with 230 followed by Kyle Lilick with 220.

All the opening night racers plus a few more are expected to see action on Saturday, April 17th, when the 602 Sportsman join the Modifieds and Sportsman creating a tripleheader show of stock car racing action starting at 7 p.m. Adult admission is $18 while youngsters 11 and under are admitted free. Active military with ID are admitted free also.
Racers must be signed into the pits by 5:30 p.m.

Racers are reminded to bring their own fuel. American Racer tires are available at the track or can be purchased on Tuesday and Thursday nights from 6:30 p.m. to 7:30 p.m. at 72 Wilt Road, Bechtelsville.

New to the schedule is the recently announced Checkered Flag Fan Club Night on May 8th with a May 15th rain date.

The United States Auto Club National Sprint Tour will see action at Grandview on Thursday, April 22nd along with the 358 Modifieds. Racing starts at 7:30 p.m.

Outlaw Racing Series Vintage Racers will be part of a tripleheader card of racing on Saturday, April 24th that will also include the Modifieds and Sportsman.
Current information on Grandview Speedway can be found at www.grandviewspeedway.com, Facebook or telephone 610.754.7688.