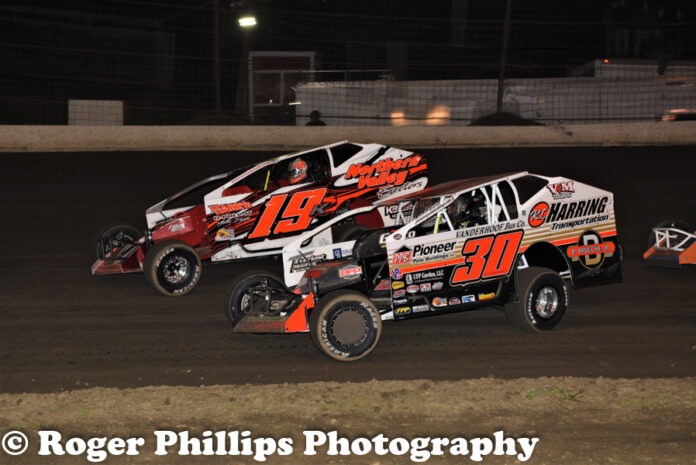 BECHTELSVILLE, PA – Out of the last five point shows in the T.P. Trailers 358 NASCAR Advance Auto Parts Weekly Series 30-lap Modified features Craig Von Dohren finished second in four of them with three being consecutive. Saturday night the defending Modified point champion advanced a position and scored his first win of the season to up his career total to 110 by holding off the challenges of Brett Kressley and Jeff Strunk.

For the second week in a row the T.P. Truck Equipment 25-lap Sportsman feature added a new name to the win list. Logan Bauman, who ran Slingshots the previous year before advancing to Sportsman this season, took advantage when leader B.J. Joly went wide coming out of turn four with a developing left rear flat tire and moved into first on the 21st lap. The rookie continued his pace to score his first career win at the track.

Two weeks in a row Jesse Leiby was the early Modified feature leader from the pole position.

A blocked track in the first turn brought out the yellow/red condition on the fifth lap. Brett Gilmore, who was chasing Leiby since the initial start took to the outside trek on the restart and succeeded in becoming the new pacesetter.

Behind Gilmore a three-way battle for second developed between Leiby, Nate Brinker and Doug Manmiller.

By the 11th lap Manmiller put pressure on Gilmore for the top spot with side-by-side action and two laps later he was showing the way.

Ryan Lilick stopped in the first turn bringing out the yellow on the 13th lap. On the restart Manmiller maintained the lead, however Gilmore drifted high with cars scrambling. When things cleared Von Dohren and Brett Kressley had taken advantage of the situation and were now second and third respectively. Waiting in the wings anticipating advancement were Leiby and Strunk, who started 24th after having to run the consolation to get into the event.

Brad Arnold and Danny Bouc tangled in the first turn on the 23rd lap. Carroll Hine III tried to squeeze by, but got caught up in the mishap. When action resumed, Von Dohren outmaneuvered Manmiller to get by him for first and Kressley and Kressley were right behind for second and third as Manmiller dropped to fourth and Leiby completed the top five.

Von Dohren kept the competition behind him and went on to chalk up the victory trailed by Kressley, Strunk, Manmiller and Nate Brinker for his best finish since moving into the modified ranks this season. Sixth through tenth were Kevin Hirthler, Duane Howard, last week’s feature winner; Leiby, Jared Umbenhauer and Gilmore.

Dylan Swinehart, Kressley and Brinker were the heat winners. The consi was won by Kevin Graver.

At the completion of eight laps Joly had a slight edge built up which he increased the distance each lap while second through fifth remained the same as they were trying to reel him in.

Dakota Kohler, who took a provisional start after failing to qualify in the consi in his badly damaged car from an earlier heat incident and then ran Jesse Leiby’s backup car, and Joey Vaccaro tangled along the homestretch for the 16th lap caution regrouping the pack. Joly held on to the lead, but by this time Bauman was second.

One lap later Nathan Mohr stopped along the backstretch and after the yellow was thrown pulled into the infield. When racing went green again Joly went too high coming off of turn four as the left rear tire started going down and Bauman was now ahead. Joly was determined to overcome the obstacle and try to regain control.

Bauman never surrendered the lead and went on to claim the triumph. Scoring his best career finish ever for second was Joly followed by Stofflet, who also had his best run; Chris Esposito and Cody Manmiller, another rookie that garnered his best run. Rounding out the top ten were Schneck followed by Miller. Decker Swinehart, Kenny Gilmore and Dylan Hoch.

Heats were won by Miller, Joly and Bauman. Vaccaro was the consolation winner.

Damon Paul led the first lap of the spring feature before Danner took over.

Battling for positions behind him were Paul, Kenny Miller III, Bruce Buckwalter and Drevicki as positions were constantly being swapped.

The red was thrown on the 13th lap when Eric Jennings flipped in the third turn with Ed Aikin also involved. Both drivers were uninjured, but out of competition. It was still Danner first on the restart. Mechanical issues forced second place runner Miller III to slow for the caution on lap 15 and now Drevicki was second.

In the closing stages Danner, Drevicki and Alex Bright were in a three-way duel for the lead and that’s the order they finished with Buckwalter fourth and Tommy Kunsman Jr. fourth and fifth. Nash Ely, Troy Betts, Mike Meyers, Billy Ney and Jason Cherry completed sixth through tenth.

Next up on the schedule at Grandview is another tripleheader show of racing action featuring the T.P.Trailers Modifieds, T.P.Truck Equipment Sportsman and the Outlaw Vintage Racers. It all gets the green at 7:30 p.m. May 22nd. Adult admission is $14 while youngsters 11 and under are admitted free.

Then on Saturday, May 29th it is a doubleheader card of Modifieds and Sportsman.