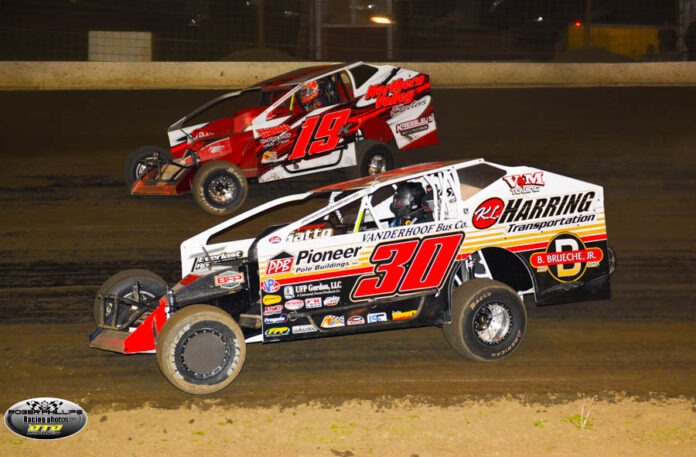 BECHTELSVILLE, PA – Brett Kressley used the outside lane to get to the front of the pack in the 358 NASCAR Advance Auto Parts Weekly Series 30-lap Modified feature on Saturday night at Grandview. Once “The Threat” became the new leader at the Dan’s Deli ½-way Hoagie mark he used the bottom lane to protect the lead and keep runner-up and early leader Danny Bouc in tow.

Kressley continued his rapid pace and went on to park the Kressley’s Auto & Truck Sales No. 19K in victory lane for the third time this year.

Dylan Hoch, who became a regular campaigner in the Sportsman division this year overtook Matt Clay on the 17th lap of T.P. Truck Equipment 25-lap Sportsman main to win his second feature of the season by a sizeable margin.

In the Outlaw Vintage Series class, Dave Dissinger led from start to finish to win the 12-lap Sportsman class feature. In the 12-lap Modified feature Andy Cassel overtook leader Jeff Paulson with three laps to go to take the checkered.

Darrin Schuler took the early lead at the drop of the green from starter Ray Kemp to show the way for his fellow Modified competitors.

The first caution was on the eighth lap when Jeff Strunk, stopped in turn one and Duane Howard was slowed along the backstretch after the two made contact. Both eventually returned. The restart was no go since Strunk, Dillon Steuer, Joe Funk III, Brad Arnold and Justin Grim tangled in the first turn.

Schuler was still the pacesetter when action resumed, but now the top five consisted of Haring Jr., Bouc, Leiby and Kressley.

The lead changed on the 12th lap restart created when Leiby slowed to head into the infield and cars scrambled behind him and spun. It was then that Bouc charged into first trailed by Kressley and Craig Von Dohren, who both made bold moves for second and third along with Gilmore and Schuler.

With 18 laps completed Haring Jr. hopped over Schuler’s tire and continued without losing a position, but Schuler wasn’t as fortunate and spun in the second turn for the yellow. Howard was unable to avoid the incident, made impact and was out of competition also. On the restart Kressley put the Morgantini Engines powered mount into first. The action behind Kressley for the remaining positions was hot and heavy between Bouc, Jared Umbenhauer, Doug Manmiller and Von Dohren.

Kressley never looked back and went on to garner his 15th career victory. Positions were constantly changing in the later stages and chasing him across were Bouc, Manmiller, Umbenhauer and Von Dohren. Sixth through tenth were Craig Whitmoyer, Eric Biehn, Strunk, who came back after going to the rear twice; Ryan Grim, who started 27th and earned the Hard Charger award and Nate Brinker.

Mark Gaugler set the pace for the first lap of the Sportsman feature before Matt Clay took over the lead.

With Clay now in front, Tyler James, Joey Vaccaro, and Hoch, who are all competing for the full season, along with Jimmy Leiby diced for the remaining positions.

On the 16th lap, B.J. Joly, who had his best finish ever the previous week, was down on the inside lane trying to pull into the homestretch infield with a flat tire, got hit from behind by James, who was in second at the time. The impact caused Joly to spin and get hit by Mark Kemmerer, who had no place to go. All drivers were uninjured, but their cars sustained heavy damage.

It took two times to get the next lap completed, but once they did Hoch charged into first and in a matter of time had a sizeable lead built up.

No one was able to reel Hoch in to attempt to challenge him and he went on to score another win followed by Vaccaro for his best finish; Decker Swinehart, Leiby and Clay. Rounding out the top ten were Brian Hirthler, Cody Schantz, Kenny Gilmore, Chris Esposito and Mark Schneck.

Clay, Gaugler and Gilmore were the heat winners while Ryan Beltz won the consi.

In the Modified Vintage race Andy Cassel passed runner-up Paulson on the ninth lap to win the event. Third was Scott Schaeffer followed by Wes Cassel and Todd Lapp.

Coming up on Saturday, May 29th is a doubleheader card of T.P.Trailers Modifieds and T.P.Truck Equipment Sportsman part of the NASCAR Advance Auto Parts Weekly Series. The Meet & Greet for the night is tentatively set with Mod ace Ryan Grim and two Sportsman hot shoes Jesse Landis and Nate Mohr. Racing gets the green at 7:30 p.m. Meet and Greet takes place starting at 5 p.m. at the main gate area.

And on June 5 it is another action packed show featuring the T.P.Trailers Modifieds and T.P.Truck Equipment Sportsman.