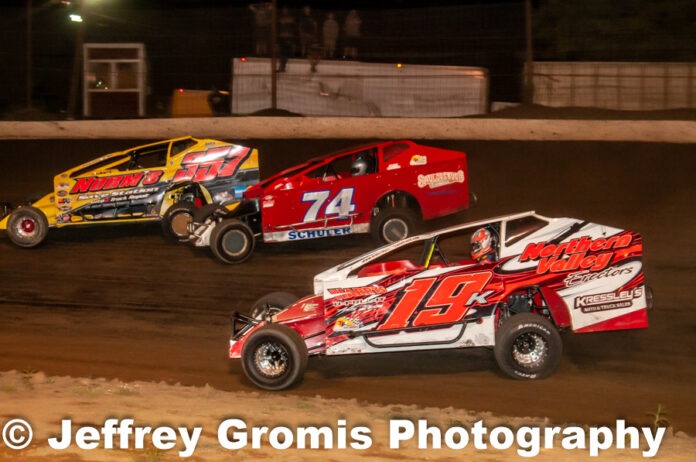 BECHTELSVILLE, PA – Ma Nature put a damper to racing the previous week at Grandview Speedway, but Saturday night action returned to the 1/3-mile Berks Co. oval and Brett Kressley and Dylan Hoch were back to their winning ways in their respective division features.

Kressley started deep in the pack in 16th and by the 16th lap he was leading the 358 NASCAR Advance Auto Parts Weekly Series 30-lap T.P. Trailers Modified feature being chased by Duane Howard and Jared Umbenhauer across the finish line. Kressley collected his fourth win of the season for a Saturday night career win total of 16 tying him with Jon Kellner Sr. and Chip Slocum.

In the T.P. Truck Equipment 25-lap Sportsman feature Dylan Hoch jumped on an opportunity when leader Matt Clay got trapped behind a lapped car. Hoch took advantage of it, took the outside path and moved into the lead. There was no stopping him as he pulled into victory lane for the third time of the year.

Mark Kratz set the first lap of the Modified feature before Jeff Strunk’s car shut off bringing him to a stop in turn one and was out of contention for the night to bring out the yellow. When action resumed Jesse Leiby took over the lead, but was short lived when Cory Merkel was against the third turn boilerplate for the next caution. Kratz reinherited the lead on this restart.

The lead changed again on the fifth lap when Mike Lisowski motored into first. By this time the battle for second began between Leiby and Kressley trailed by Ron Haring Jr., Jack Butler and Howard who were anticipating a slip up for advancement

It wasn’t until the tenth lap that Kressley finally cleared Leiby and set his sights on Lisowski.

Lisowski hugged the inside line to keep Kressley from passing, but on the 16th lap Kressley found enough room to get underneath Lisowski and take over the top spot. Two laps later Howard overtook second and was in pursuit of the leader.

A three-way battle for first soon developed between Kressley, Howard and Umbenhauer, who started 12th and 13th respectively.

With five laps remaining Kyle Weiss and Craig Whitmoyer tangled in the third turn allowing the pack to regroup. Kressley, the current point leader, motored away quickly on the single-file restart and went on to claim another triumph. Finishing second was Howard followed by Umbenhauer, Craig Von Dohren and Lisowski. Ron Haring Jr., who had his best finish; Butler, Timmy Buckwalter and Jordan Henn completed the top ten.

Kratz, Leiby, Kressley and Lisowski won the heats. The consies were won by Louden Reimert and Danny Bouc.

Sportsman action started with multiple accidents before the 1st lap could be completed with Matt Clay as the leader.

A rash of more mishaps with one lap in the books resorted to a single-file restart. Clay still was ahead followed by Kenny Bock, Cody Manmiller, Hoch and Kenny Gilmore, the current point leader.

While Clay showed the way Bock, Hoch and Manmiller diced for positions with Hoch waiting in the wings.

Manmiller caught the fourth turn yuke tire which cost him some positions and Hoch took advantage of the opportunity to take over third.

Hoch made his way into second on the 14th lap and now set his next goal at passing Clay.

By the 17th circuit lap cars were coming into the picture for the front runners.

Despite the lapped cars running as low as possible, Clay got caught behind one. This was the opportunity Hoch needed and he capitalized on it, passed Clay and was now in front.

Hoch never looked back and was in the winner’s circle again. Second through fifth were Clay, Manmiller, Bock and Gilmore. Rounding out the top ten were Mark Kemmerer, Mike Schneck, Chris Esposito, Bryan Rhoads and Tyler James.

On Friday, June 11th the Outlaw Racing Series Enduro and Vintage Racers will be the attraction starting at 7 p.m.

The 602 Sportsman Mini-Series returns to action on Saturday, June 12th making for a tripleheader program and that will include the Modifieds and Sportsman. The Meet and Greet at the main gate, 5 p.m. to 6 p.m., is scheduled to include Modified racer Ryan Grim along with Jesse Landis and Nate Mohr from the Sportsman ranks. Adult admission is $15 while youngsters 11 and under admitted for free. Racing is scheduled to start at 7:30 p.m.

The Thunder on the Hill Racing Series will be the attraction on Tuesday, June 15th and will include the United States Auto Club National Sprint Car tour in the Eastern Storm Jesse Hockett Classic and the 358 Modifieds.