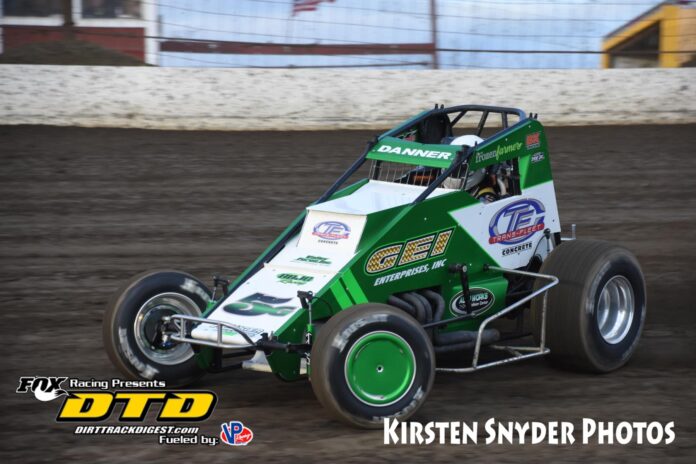 BECHTELSVILLE, PA – Nineteen year old Briggs Danner of Allentown, PA would like nothing more than to be sitting in victory lane and holding that big Thunder on the Hill check on Tuesday night, June 15 when the AMSOIL USAC Non-Wing National Sprint Car Series invades the Grandview Speedway.

This will mark the opening night of the USAC Eastern Storm that is part of the NAPA Auto Parts Thunder on the Hill Racing Series. The win in the Jesse Hockett Classic 40 lap USAC feature is worth $6,000. The 358 Modifieds will be an added attraction to the program competing in qualifying events all leading up to the 30 lap feature paying $3,000 to win. Gates open at 5 PM and race time is set for 7:30 PM.

The youthful Briggs Danner has been making quite a name for himself in local non-wing racing. He started his career in Quarter Midgets, moved into SpeedSTRs, Micros, TQ’s on asphalt, Pro 4’s at Mahoning Valley, 358 Modifieds at Grandview as well as 360 and 410 Non-Wing Sprints. It’s hard to imagine competing in that many different classes by the age of nineteen.

There are some big nights coming for Briggs Danner and it starts with a return to his home track where he will be on the national stage Tuesday night at Grandview, going up against the best in the business of non-wing sprint car racing. It’s USAC Baby!

“Non-Wing sprint cars are fun at Grandview and it was an awesome experience coming back to the hill in a sprint car, after having many laps from previous seasons at the track in a modified.” Danner added, “It was a new perspective for sure.”

Danner states the biggest difference between racing a modified and a non-wing sprint car is the weight of the cars and the size of the front tires. The sprint cars are obviously much lighter and with the modifieds, you drive them a lot straighter because of the big front tires. “I believe I have adjusted well to a non-wing car simply because of just being able to adapt to new things and it is also a huge help when the car is good and all I have to learn is driving it,” commented an excited Danner.

In the April USAC show at Grandview, Danner impressed the crowd by setting fast time in qualifying then drove the GEI Enterprise #5G to a solid ninth place feature finish. “I’m not sure if there’s really a secret to setting fast time at Grandview.” Danner explained, “Going out for qualifying somewhat early was for sure a help but other than that, I think the key was just not being afraid to enter one and three fast through the “rough stuff.”

Turning these quick laps on the tight and tricky high banks of Grandview Speedway is a thrill but there are also times when you just hold your breath. “I’d have to say the most common time that happens is if there is a wreck right in front of me and there is nowhere to go to get away from it.” Danner added, “Grandview is a narrow track, with wall on the inside and outside, you have to be on your toes. The USAC guys are good, they race clean and they know where they’re are putting their cars in every corner.”

“The guy to beat is Brady Bacon and the stats (especially at Grandview) prove it.” Danner continued to say, “I feel like he consistently has one of the best cars everywhere and he is a very smart driver with a lot of laps in a sprint car.” Brady Bacon of Broken Arrow, AZ has won the last four USAC events at Grandview Speedway.

Briggs Danner is in the process of molding his future in sprint car racing and he would like to thank his family and friends as well as his sponsors that include GEI Enterprise, E Schneider & Sons Recycling, Valley Forge Inc, Transfleet Concrete, Auto Works Collision Center and Frozen Farmer. So in closing, what will it take to win a USAC National event at Grandview on Tuesday night, June 15? Danner replied, “First it will take a good qualifying run to start up front in the feature and on-going adjustments for a slick track to be out front and stay out front.”