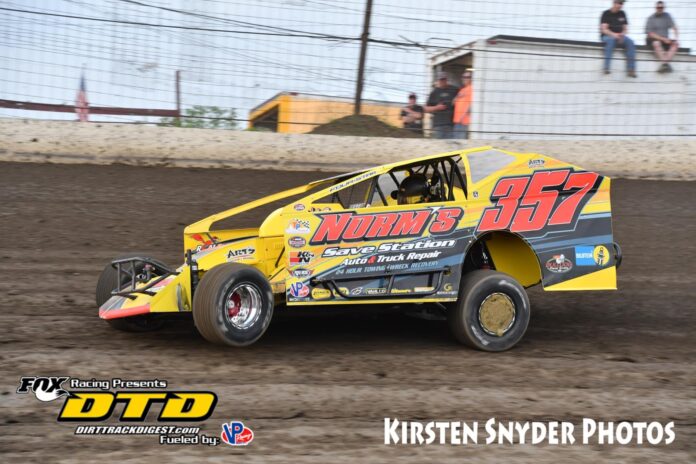 Bouc in his first full season at the track behind the wheel of the Norm Hansell Save Station No. 357, battled with veteran campaigner Ray Swinehart, the race leader since the initial green, beginning on the 16th lap.

Swinehart ran the high line while Bouc took the low route, and the pair battled side-by-side never making contact. Swinehart kept hitting his marks and Bouc never gave up. With one lap remaining Bouc succeeded in gaining the lead and went on to take home the checkered with Swinehart right on his bumper.

The T.P. Truck Equipment 25-lap Sportsman feature saw Kyle Lilick take the lead from rookie Logan Bauman, already a feature winner this year, on the 17th circuit and continue his pace to score his second win.

It was ironic that all three feature winners chalked up their second win of the season in their respective division.si

Ray Swinehart wasted no time keeping the Graber Letterin’ No. 33R at the head of the Modified feature at the wave of starter Ray Kemp’s green flag.

Before the second lap could be completed the red was thrown for a five-car homestretch accident. Jeff Strunk was on top of Ryan Lilick’s car after getting launched by Richie Hitzler who had nowhere to go since cars were scrambling in every direction. Also involved were Bobby Gunther-Walsh, Justin Grim and Brett Kressley. The only one able to continue was Kressley.

By the eighth lap with Swinehart in command, Kratz and Bouc had their own race for second which allowed Swinehart to increase the distance between himself and his fellow competitors.

The field regrouped on the 16th lap when Timmy Buckwalter and Darrin Schuler tangled in turn two. Swinehart remained in first, but now Bouc was in the challenging position.

Swinehart stuck to the high groove while Bouc ran low as the pair diced for first. Behind the duo, Doug Manmiller and D. Swinehart, had their own battle for third.

The lead was exchanged with Bouc now the second and new leader with one laps to go.

B.J. Joly led seven laps of the Sportsman feature before Logan Bauman made contact with him and moved into first.

Lilick took over second on the 11th lap yellow needed when Cole Stangle spun between the first and second turn, and began to pressure Bauman.

The caution was thrown on the 17th lap when Lex Shive was against the second turn wall. On the restart Lilick outgunned Bauman for first and was now showing the way.

Heats were won by Bauman, Jesse Landis, Joly and Parker Guldin. The consies went to Cody Manmiller and Mike Schneck.

The lead changed on the sixth lap when Hoch was now first.

It didn’t take Hoch long to build up a sizeable lead and increase the distance with each passing lap.

Positions changed behind Hoch, but no one was able to close the straightaway lead he built up to even try to challenge him.

At the drop of the checkered Hoch notched another win trailed by Leiby, Blankenbiller, James and Vaccaro. Rounding out the top ten were Ryan Grim, Glenn Strunk, Bauman, Cody Manmiller and Tyler Peet.

The Thunder on the Hill Racing Series will be the attraction on Tuesday, June 15th and will include the United States Auto Club National Sprint Car tour in the Eastern Storm Jesse Hockett Classic and the 358 Modifieds.

Outlaw Series Enduro racing along with Vintage racing will be the attraction on Friday, June 18th at 7 p.m.

And on Saturday June 19th the Wingless Super Sportsman make a rare appearance as part of a Father’s Day Weekend tripleheader that will also feature the T.P.Trailers Modifieds and T.P.Truck Equipment Sportsman. Adult admission for this special show will be $18. The Meet & Greet session that night will include Modified racer Dillon Steuer, Sportsman talent Chris Esposito and Wingless Super Sportsman standout Steve Wilbur. And since it is Father’s Day the first 50 dads through the spectator gate will receive a free gift. The youngest and oldest dad will each receive two free passes.