BECHTELSVILLE, PA – Every victory holds significance for a racer. From time to time, there’s something that makes a win even a little more special.

That was the case for Justin Grant on Tuesday night in the USAC Eastern Storm opener at Grandview Speedway in Bechtelsville, Pennsylvania.

With his 23rd career USAC AMSOIL National Sprint Car feature victory, the Ione, Calif. surpassed his father-in-law on the all-time win list, the late, great Bubby Jones, who passed away in January 2020.

It had been four months since the 22nd and most recent victory for Grant, in Ocala, Fla., a number which tied him with the National Sprint Car Hall of Famer, Ol’ Bub.

“It means a lot,” Grant said. “Bubby was awesome and won a lot of races and he helped me win a lot of races. We miss him a lot and I wish he was here to see it. I’m sure he would’ve helped me get there tonight. Bub won more races than I’m ever going to win and, if he was here, he’d tell you. It was really special to be on the same number (of wins) for a while, which also means it’s been a really long time since we won a race, so I’ve got to relish it.”


Furthermore, Grant’s second series victory of the season came on an evening in which many were mindful of two racers who won an Eastern Storm round at Grandview and whose lives were both tragically cut short in their prime: Jesse Hockett and Bryan Clauson.

Hockett, the 2009 Grandview USAC winner, was the namesake of Tuesday night’s race. For Clauson, the 2016 Grandview winner, the calendar fell on what would’ve been his 32nd birthday. Grant competed with both individuals and had his mind on the two greats throughout the course of the evening.

“Both guys made a big impression on me,” Grant said of Hockett and Clauson. “I raced with the Clauson family for a while and got to know the Hockett family well. You always want to win but winning a race on a day that carries some meaning is special. We wish they were here to race with us, but if they were here, I might’ve run third.”

Wildly enough, Bryan Clauson was the last driver not named Brady Bacon to win a USAC National Sprint Car feature at Grandview Speedway. Bacon came into Tuesday’s event riding a four-race winning streak at the 1/3-mile dating back to the 2017 season.

Bacon lined up fifth, but it was Grant who started from the pole position and wound up as the one his competitors found themselves chasing for all 40 laps.

Bacon sliced his way to the lead on the start, sweeping into turn one ahead of outside front row starter and USAC East Coast Sprint Car point leader Alex Bright.

Cautions came early and quite often, starting with 5th running Jake Swanson who slowed on the sixth lap, which sent him to the work area. After being shuffled to the back of the 22-car field, Swanson raced his way back to the 12th position at the checkered.

Following the restart, by lap 10, Grant flexed his muscle up front as he built himself a half-straightaway cushion by the 10th circuit. However, a yellow flag on lap 13 halted the pace when Mark Smith (20th) slowed on the back straightaway with a mechanical issue. In the process of trying to avoid contact, Paul Nienhiser (22nd) made contact with the rear bumper of Smith. Smith pulled off, finishing 22nd, while Nienhiser soldiered on to a 17th place result.

Nearly a full lap after the restart, second running Alex Bright slipped off the bottom in the fourth turn, opening the door for both Tanner Thorson and Brady Bacon to slip underneath for 2nd and 3rd, respectively, while Bright fell back to fourth. Immediately, the path was clear for Thorson and Bacon, who shrunk Grant’s advantage to where the three-pack ran nose-to-tail for the lead.

On the 22nd lap, 11th running Brandon Mattox stopped in turn three to force another yellow, but once the fray resumed, the contentious contest resumed just as well with this trio of Grant, Thorson and Bacon in unison much like the three-part harmony of Crosby, Stills and Nash.

However, Grant, like the members of CSN, went solo. Thorson, while tailing the rear bumper of Grant, became sideways at the exit of turn four, allowing Grant a little bit of separation until another untimely yellow fell for three-time USAC East Coast Sprint Car champion Steven Drevicki (11th) who slowed to a stop in turn two.

With the gap now closed for the restart with only the final five laps remaining, Thorson went right to the back bumper of Grant as the two sped into turn one. Thorson cranked it completely sideways on the entry into turn one but saved it. Bacon used the space, and the opportunity, to race around the outside of Thorson for the runner-up spot moments later.

Bacon attempted to track down Grant during the final few laps, but only managed to pull within four car lengths of Grant in traffic. Grant closed out his victorious night with a 0.701 second margin of triumph over Bacon, Thorson, Kevin Thomas Jr. and Robert Ballou.

Grant, in his 24th career Eastern Storm start, finally broke through for his first ever victory in the five-race mini-series which originated in 2007.

“I finally got one of these,” Grant exclaimed, referring to an Eastern Storm win. I’ve historically been absolutely terrible out here. The track was kind of changing, but I really felt like I moved at the right times. I felt confident in my moves, and I felt confident that it was time to move when I moved. That doesn’t always work that way. The nights when you win races, everything flows, almost like it’s already done and you’re just going through the motions. That’s how tonight felt.”

Despite zero wins since leaving Florida in mid-February, Grant has hung in the thick of the title hunt and has now landed inside the top-five in five of his last six series starts while residing second in the USAC National standings behind Bacon.

After a wintertime move of Grant and TOPP Motorsports’ sprint car operation from Rochester, Ind. down to next door to Hemelgarn Racing’s shop on Gasoline Alley in Indianapolis, Ind., Grant reflected on the difficulty of winning a USAC AMSOIL National Sprint Car race and what it has taken to put the TOPP Motorsports/NOS Energy Drink – MPV Express – TOPP Industries/Maxim/Kistler Chevy up front and contending for wins.

“Every one of these wins gets more and more special, it seems like,” Grant reflected. “I keep fearing that each one is going to be the last one. We keep working hard and we keep trying to be better. Everybody just seems like they’re getting better and better, and their cars are getting faster and faster. It’s a lot of fun to try and stay ahead of that curve, a lot of work as well. The effort and the preparation that it takes to run this deal and the team around you is so big. Everybody’s got nice cars now; everybody’s got nice motors; everybody’s got a good shock package now. A lot of days, it really comes down to where you’re at mentally, having a good group around you, people you can trust, people who have your back and people who are pumping you up is huge. I have that right now.”

Although the Broken Arrow, Okla. driver finished a close second on this night, Bacon still has not finished outside of the top-ten in any of his nine Grandview USAC Sprint starts aboard his Dynamics, Inc./Fatheadz Eyewear – Elliott’s Custom Trailers & Carts – TelStar/Triple X/Rider Chevy.

Prior to Tuesday at Grandview, Tanner Thorson had endured three-straight finishes outside the top-ten in USAC AMSOIL National Sprint Car racing this year. The most recent finish to his liking came at a Pennsylvania track (Path Valley) during April’s Keystone Invasion. In fact, both of his USAC AMSOIL National Sprint Car wins came in the state, and it appears all Thorson needed was a little Keystone magic to right the ship in his Reinbold-Underwood Motorsports/AME Electrical – Competition Suspension, Inc. – Mesilla Valley Transportation/Spike/Stanton Chevy. 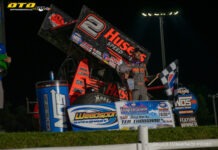 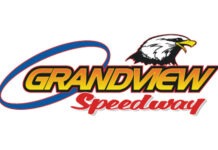 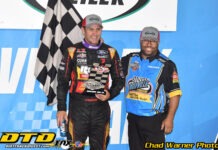