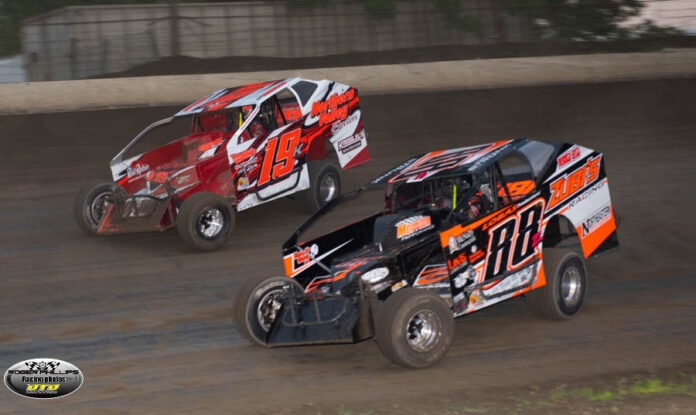 BECHTELSVILLE, PA – Brett Kressley, the current point leader, narrowly eked out his fifth 358 NASCAR Advance Auto Parts Weekly Series 30-lap T.P.Trailers Modified feature win of the season by mere inches over defending point champion Craig Von Dohren on Saturday night at Grandview Speedway. Coming in for the checkered with Von Dohren making a bold move on the outside at full speed and Kressley on the inside the pair crossed the finish line side-by-side. Kressley was declared the winner by a small fraction.

Kenny Gilmore proved that consistency pays off and that’s why he’s the current T.P.Truck Equipment Sportsman point leader. Gilmore, who hasn’t been to victory lane since May 20, 2015, overtook Logan Bauman, a rookie who already scored his first career win earlier in the season, with three laps to go and went on to win his first 25-lap Sportsman feature of the year for a career total of six.

Joe Medaglia took advantage of the situation when leader Denise Hall got trapped behind a lap car to move into first with two laps remaining and go on to win the 12-lap Outlaw Vintage Sportsman feature.

Wes Cassel led from start to finish to take home the checkered in the Outlaw Vintage Modified feature.

On the initial start of the Modified feature Kevin Graver Jr.’s car lost power causing cars to scramble in various directions and the red came out because the homestretch was blocked. The next attempt was thwarted for a second turn incident.

By the sixth lap Kressley went from 16th to second to pressure Schuler.

It was only a matter of time until Kressley motored the Kressley’s Auto & Truck Sales No. 19K into first with nine laps completed.

Cory Merkel brought out the final yellow after losing a tire in turn two on lap 15. Kressley wasted no time pulling away on the restart since he knew the consistency of the competition behind him.

Von Dohren took over second with seven to go as Howard started falling off the pace with front end suspension problems, and took chase after Kressley.

With five laps to go Von Dohren closed the gap since some of the lap traffic failed to heed the move over flag or the in-car radio warning which slowed Kressley. Down and Von Dohren gained ground.

Coming in for the checkered Von Dohren, who was alongside Kressley on the outside made one last attempt, but came up short as Kressley beat him by a narrow margin. Strunk had a change of luck for his best run in some time to claim third followed by Jared Umbenhauer and Mike Maresca. Howard hung on to sixth followed by Doug Manmiller, Ryan Grim, Dylan Swinehart and Jack Butler.

Sportsman action saw Bauman take the early lead in search of another win. Behind him battling for positions were Lex Shive, Tom Miller, Parker Guldin and Nathan Mohr.

After 18 laps of non-stop action, a multi-car second turn accident brought out the yellow. Bauman continued to show the way when action resumed, but by this time Gilmore was second putting in his bids for first.

With three laps remaining Gilmore overtook Bauman and was off in search of another long-awaited win.

Dave Dissinger hit the wall between turns three and four and then the infield marker yuke tire with heavy impact. He was uninjured. Hall was still first on the restart.

Hall got caught up behind a lap car and this allowed Medaglia to take the lead away on the eighth lap and go on to take the win followed by Hall, Haydt, Garris Sr. and Matt Smith. Sixth through tenth were Gerhart, Mike Stofflet, John Pasteur, Greg Pearson and Kevin SponglIn the Modified Vintage feature Cassel started on the pole and led every lap. Runner-up Jeff Paulson closed in on him at one point, but later Cassel built up a comfortable lead and no one could challenge him. Jon Lines finished third followed by Scott Schaeffer, Stofflet, Bobby Hall and Todd Lapp.

Tuesday, June 29th offers another exciting Thunder On The Hill Series featuring the Pennsylvania 410 Sprint Speedweek with the Hodnett Cup paying $10,000 to win plus 358 Modifieds. Duane Howard, Brett Kressley and possibly a sprint car racer or two will be part of the 5 p.m. Meet and Greet.

Sportsman will be in the spotlight on Saturday, July 3rd, when the annual Firecracker 40 is presented with a large field of T.P.Truck Equipment Sportsman expected to battle for the $2,000 first place money. The T.P. Trailers Modifieds will be the second part of the show. Adult admission is $22 while youngsters 6 thru 11 pay $10 Under 6 are admitted free. Action gets the green at 7:30 p.m.

Modified racer Bobby Gunther Walsh will have his #65 on display and will be giving out American flags, Mike & Ike plus Hot Tamales candy (both are sponsors on his race car), rising star Joey Vaccaro and veteran racing talent Ryan Beltz. It happens at 5 p.m. at the main admission gate area. 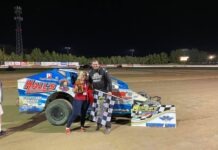 Watson Does it Again at Delaware