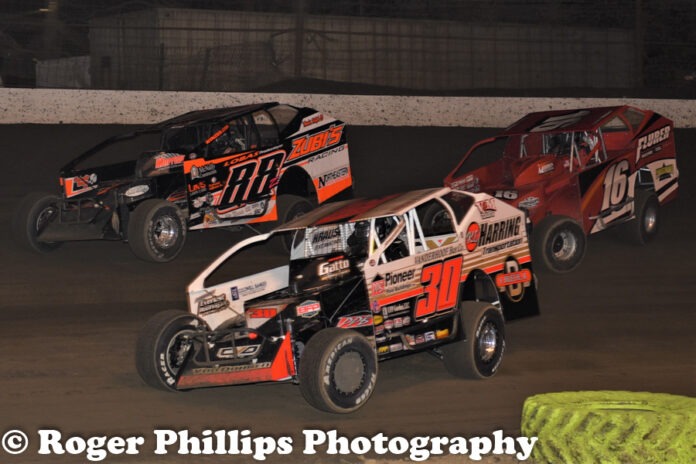 BECHTELSVILLE, PA – As is usually the case after a rainout racers will be chomping at the bit to get back in action on Saturday night at Grandview Speedway. And there will be plenty of action being offered with the T.P.Trailers Modifieds, T.P.Truck Equipment Sportsman and the Outlaw Vintage Racers ready for racing with the green flag falling at 7:30 p.m.

The NASCAR Advance Auto Parts Weekly Racing Series, featured at tracks across the nation, will see five feature winner Brett Kressley looking to add another win to his impressive record as he continues to lead the Modified point standing. However he has plenty of competition as defending champ Craig Von Dohren holds on to second spot. Von Dohren is an 11-time champion. Giving chase for the title are such talents as six time champion Duane Howard, Jared Umbenhauer and another multi time champion Jeff Strunk who is coming off a recent feature win at Grandview along with many others.

Kenny Gilmore, the T.P.Truck Equipment Sportsman point leader, will be looking to add a second win to his record.

A strong field of entries will be on hand for the Saturday night action. And the popular Outlaw Vintage Racers will be on hand to offer their special type of racing and give fans an idea of what the race cars were like some years back.

Qualifying events will lead to the features and top performers will head home with the big bucks for their winning efforts.

Closing out the month, July 31, will be the return of the 602 Sportsman racers as they join the Modifieds and Sportsman. Headlining the Meet & Greet will be Modified ace Jared Umbenhauer along with Sportsman talents Kenny Bock and Lex Shive. An added attraction will be the appearance of NASCAR Xfinity driver David Starr who carries the same ATS sponsorship as Bock.

The month of August kicks off with a Thunder on the Hill Racing Series doubleheader that will feature the USAC National Midgets Ken Brenn Masters and Modifieds. That will be Tuesday, August 3 with a 7:30 p.m. starting time.

Friday August 6th will feature the Outlaw Racing Series Enduro and Vintage Racing Series. Action gets the green at 7 p.m.

And on Saturday August 7th the T.P.Trailer Modifieds and T.P.Truck Equipment Sportsman will be featured in another action packed show.

For information on racing at Grandview check in at www.grandviewspeedway.com, Facebook, or telephone 610.754.7688.