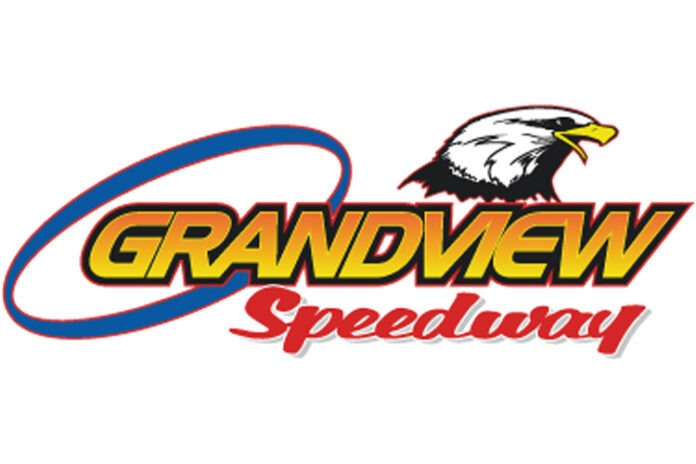 BECHTELSVILLE, PA – Kevin Graver Jr. took a few weeks off from racing at the 1/3mile high banks of Grandview Speedway to regroup after struggling with various car issues.

The team returned on Saturday night and made their presence known. Graver Jr. overtook the lead following a multi car homestretch accident with five laps in the books and went on to score his first career victory at the track in the 358 NASCAR Advance Auto Parts Weekly Series 30-lap T.P. Trailers Modified feature. Graver Jr., who mainly ran asphalt, adjusted to the change and couldn’t believe he was in victory lane, but he just did his thing and ran his line as the race progressed.

Dylan Swinehart inherited the lead when leader Dylan Hoch was hindered by a flat tire bringing out the yellow on lap six. Swinehart held off runner-up Jimmy Leiby’s challenges to win his first 25-lap 602 Sportsman Crate feature to become the third different winner in the series.

Carroll Hine III led the first two laps of the Modified feature before Justin Grim and Ron Kline tangled in the second turn causing the yellow. On the restart Jordan Henn charged to the front of the pack to become the new pacesetter.

On the fifth lap Bobby Gunther Walsh and Ryan Lilick got hooked together which caused the cars behind them to scatter and set up a huge multi-car accident along the homestretch that caused Jared Umbenhauer to do a slow roll with cars facing in numerous directions. He was able to get out of the car under his own power. Also eliminated were Craig Von Dohren, Kevin Hirthler, Duane Howard and Darrin Schuler. Several others were also involved but after pits tops returned to action.

After the accident was cleared and action resumed Graver Jr. passed Henn on the outside and was now in the number one position trailed by Henn, Mike Lisowski, Jesse Leiby and Brad Grim. Joining the mix trying to get into the top five was Doug Manmiller and he succeeded by the Dan’s Deli ½ way hoagie mark

Manmiller wasted no time getting to the front and by the 24th lap he advanced to second in pursuit of Graver Jr.

Graver Jr. never surrendered the lead and chalked up the win followed by Manmiller, who despite receiving damage in the homestretch accident, managed to garner second; and Henn. Leiby, who ran a solid fourth since the 19th lap never made it to the finish line. He cut a tire and hit the fourth turn wall. Lisowski was then fourth and Timmy Buckwalter fifth. Sixth through tenth were Brad Arnold, Danny Bouc, Jeff Strunk, Brad Grim and Ryan Grim.

Henn, Grim and Buckwalter were the heat winners. Brett Kressley, who was involved in the main stretch feature incident and later dropped out of the event, won the consi.

Gilmore took over the runner-up spot on the ninth circuit and set his sights on Young.

A multi-car third turn accident brought out the next yellow on the 12th lap On the restart while attempting to pass Young, Gilmore found himself taken up to the boilerplate costing him several positions and Lilick was now second. Lilick met the same fate as Gilmore did when he tried to pass Young and now Smith ran second.

First, second and third changed on lap 14 since Smith, Gilmore and Lilick held those positions with Young fourth and Brian Hirthler fifth.

With five laps to go Gilmore’s car broke and he had to pull into the infield.

Smith was determined to lead until the drop of the checkered and he did just that to score back-to-back wins. Following him across were Lilick, Hirthler, Hoch and Mark Kemmerer. Rounding out the top ten were Nathan Mohr, Young, Tyler James, Jimmy Leiby and Dakota Kohler.

Heats were won by Rotenberger, Young and Adrianna Delliponti. Kohler was the consi winner.

Hoch led four laps of the 602 Crate Sportsman feature until a flat tire brought him to a stop in turn one an Dylan Swinehart inherited the lead.

The top five remained the same as the laps dwindled down. Lap traffic allowed Leiby to briefly close in on Swinehart.

Swinehart never looked back once he had control and went on to score his first win in the division followed by Jimmy Leiby, R. Grim, Smith and Decker Swinehart. Logan Bauman, Richie Hitzler, Parker Guldin, Tyler Peet and Glenn Strunk completed the top ten.

Coming up Tuesday August 3 is a Thunder on the Hill Racing Series doubleheader will feature the USAC National Midgets Ken Brenn Masters and Modifieds. Racing starts at 7:30 p.m. Modified racer Tim Buckwalter along with a number of USAC teams will take part in the Meet & Greet.

Friday August 6th will feature the Outlaw Racing Series Enduro and Vintage Racing Series. Action gets the green at 7 p.m. Da Rev’s Meet & Greet will feature representatives from each division of racing starting at 5 p.m.

And on Saturday August 7th the T.P.Trailer Modifieds and T.P.Truck Equipment Sportsman will be featured in another action packed show. Meet & Greet will include Modified racers Jordan Henn and Glenn Owens along with Sportsman talents Nick Faust and Mike & Ryan Laise and newly retired racer Tom Miller.

Coming up on Saturday August 14th the Forrest Rogers Memorial, named in honor of the man who planned and built Grandview Speedway with the help of son Bruce, will take place. The 50-lap Modified Classic will reward the winner with $10,000. And the Sportsman will be part of the doubleheader show. Meet & Greet will include Modified racer Kevin Hirthler along with Sportsman racers Brian Hirthler and Adrianna Deliponti along with young Jesse Hirthler. There will also be a Chapel on the Hill service at 4:30 p.m. to 5 p.m. in the first turn pavilion.