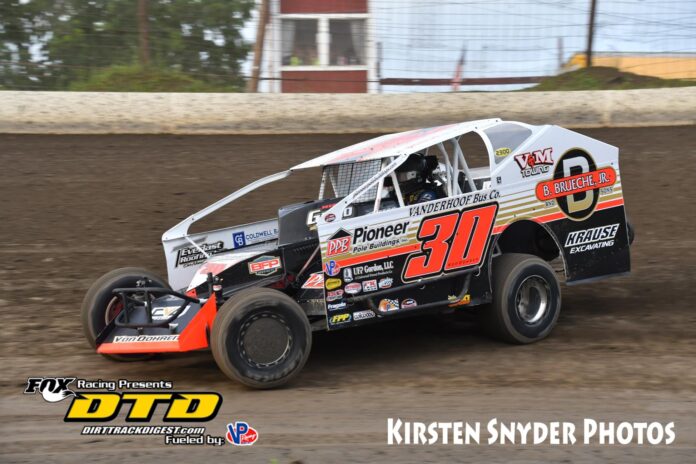 Owens had the biggest disappointment on the 28th lap restart when he was pushed into the infield out of fuel.

In the T.P. Truck Equipment 25-lap Sportsman feature Dylan Hoch became the new leader with five laps to go and went on to chalk up victory number four of the season in the division.

At the onset of the Modified feature, Owens wasted no time pulling away from his pole starting position followed by Ron Haring Jr., Carroll Hine III, Cory Merkel and Mark Kratz.

While running a strong second Haring Jr. brought out the first caution on the ninth lap when engine problems caused him to stop in turn one. On the restart Owens maintained his position with second through fifth now comprised of Hine III, Kevin Hirthler, Merkel and Jared Umbenhauer.

The next yellow flew with 15 laps in the books when Jesse Leiby was spun in the fourth turn. The restart was void after contact was made between some of the front runners and Merkel found himself spun and into the backstretch wall. The next attempt was no better as Kratz and Bobby Gunther Walsh were spun. Current point leader Brett Kressley was sent to the rear for initiating the incident.

It was still Owens showing the way when action finally resumed, but by this time Von Dohren, Doug Manmiller, Hirthler and Strunk completed the top five.

For nine continuous laps Owens kept the “Hoagie Express” No. 73GT ahead of the field as Von Dohren tried several different maneuvers to pass him.

With five to go Von Dohren made his move on Owens and was the new pacesetter.

Kressley, Ryan Lilick and Jordan Henn tangled in the second turn with two laps to go for the final yellow. Before the race resumed Owens had a huge let down when he had to be pushed off the track out of fuel.

Von Dohren was still first, but by now Strunk, having charged from 19th starting spot, was second looking for another win as a birthday present trailed by Manmiller, Hirthler and Ryan Grim.

Von Dohren kept all the competitors at bay and went on to claim his 113th Saturday night feature career win having come from 16th starting spot. Strunk made some moves on Von Dohren, but had to settle for second with Manmiller, Hirthler and Grim rounding out the top five. Sixth through tenth were Dylan Swinehart, Umbenhauer, Hine III, Brad Brightbill and Danny Bouc.

Kratz, Merkel and Hine III were the heat winners. The consi was won by Darrin Schuler.

In the Sportsman feature rookie Hunter Iatalese followed by two more rookies Adrianna Delliponti and Mark Stofflet were the top three for several laps. Waiting for a chance to advance were Dylan Swinehart and Kenny Bock.

Lex Shive found himself against the wall between turns three and fourth for the eighth lap caution. Iatalese held his own on the restart with Bock making his presence known.

Swinehart overtook second on lap 11 and set his sights on Iatalese.

Swinehart became the new leader on lap 15 when he was able to get around Iatalese.

Back-to-back feature winner Kyle Smith was spun in the fourth turn on lap 19 creating a yellow. At the same time Iatalese dropped out of competition. Hoch outgunned Swinehart on the restart for the lead.

The lead never changed after that and Dylan Hoch was victorious once again. Kyle Lilick was second followed by Swinehart, Jimmy Leiby and Kenny Gilmore. Rounding out the top ten were Bock, Mark Kemmerer, Brian Hirthler, Mark Stofflet and Nathan Mohr.

Coming up on Saturday August 14th the 51st Annual Forrest Rogers Memorial, named in honor of the man who planned and built Grandview Speedway with the help of son Bruce, will take place. The 50-lap Modified Classic will reward the winner with $10,000 and that just may attract some visitors. And the Sportsman will be part of the doubleheader show.

Meet & Greet will include Modified racer Kevin Hirthler along with Sportsman racers Brian Hirthler and Adrianna Deliponti plus young Jesse Hirthler. There will also be a Chapel on the Hill service at 4:30 p.m. to 5 p.m. in the first turn pavilion.