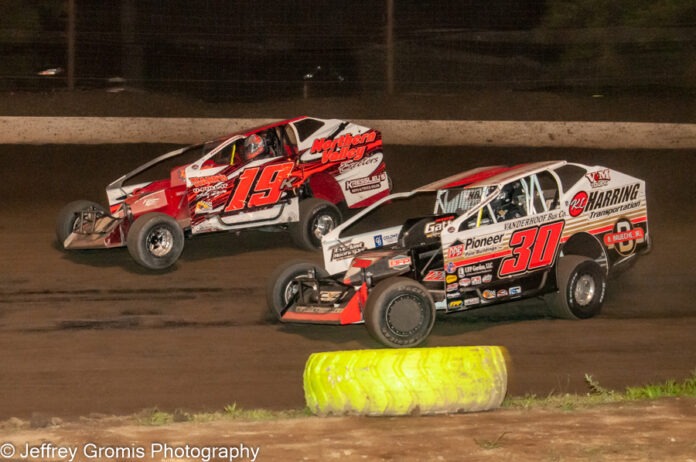 BECHTELSVILLE, PA – Craig Von Dohren overtook leader Danny Bouc on the 31st lap restart during the running of the 51st annual Forrest Rogers Memorial 50-lap 358 NASCAR Advance Auto Parts Weekly Series T.P. Trailers feature on Saturday night at Grandview Speedway. Forrest Rogers was the man behind the vision to create the 1/3-mile banked clay Berks County oval. The 11-time and defending point champion went on to record his ninth victory in the event for a hefty $10,000 payday. It was his fifth win of the season and Saturday night career win number 114. By winning the race Von Dohren regained the point lead by a narrow margin over fourth place finisher Brett Kressley who had the point lead most of the season, but through various incidents during the past few weeks Kressley saw his lead slowly dwindle down.

Brian Hirthler, the defending Sportsman point champion, came out of nowhere in the closing stages of the T.P. Truck Equipment 25-lap Sportsman feature to win his fourth feature of the current campaign.

Ron Haring Jr. took the early lead in the Modified feature and wasted no time pulling away from the pack.

Haring Jr.’s sizeable lead was erased on the fifth lap restart needed when Jeff Strunk brought out the yellow as mechanical problems continue to plague him and he was through for the night. On the restart Haring Jr. maintained the lead, but now pressure was coming from Joe Funk III, Bouc, Ray Swinehart and Brett Gilmore.

Bouc got by Haring Jr. on the seventh lap, but the next lap Haring Jr. was back in front dueling side-by-side for first while Gilmore and Timmy Buckwalter had their own race for second.

An infield marker yuke tire was hit bringing it onto the track in turn one causing the tenth lap restart. This time Bouc got the edge on Haring Jr. and became the new pacesetter.

Positions were constantly changing behind Bouc and by the 15th lap Buckwalter, Swinehart, Gilmore and Von Dohren filled second through fifth.

Von Dohren overtook second on the 29th lap restart brought out when Haring Jr., who was having a strong run earlier in the race, stopped in the third turn and now Von Dohren set his goal at passing Bouc.

Kevin Hirthler was facing the wrong direction in the third turn on the 30th lap for another yellow. When action resumed Von Dohren put the Bruecher-owned/PPB/Haring Transportation/Nick Gatto powered No. 30 into the number one position and one lap later Buckwalter was in second challenging.

The order behind Von Dohren was exchanged several times until the checkered, but first never did as he pulled into the winner’s circle where he commented he was thankful and blessed for the help from crew chief Jason Bashore and the rest of the crew for all their support. Buckwalter hung on for second trailed by Bouc, Kressley and Swinehart. Rounding out the top ten were Duane Howard, Gilmore, Jared Umbenhauer, Craig Whitmoyer, who used a provisional to get into the race and Ron Kline, who did a 360 spin in the third turn earlier in the race, but still finished tenth.

Two-time feature winner this year Kyle Smith hit the backstretch wall with heavy impact bringing out the yellow on the third lap. He was uninjured, but the car sustained heavy damage. On the restart Delliponti was still in command and while Bauman, Young, Swinehart and Cole Stangle diced for spots, this allowed her to outdistance herself.

Stangle moved into second on the 15th lap and took to the topside to run her down. Three laps later he closed the gap and began to pressure her while Hirthler, who came up through the pack quickly in the last few laps; Bauman and Swinehart waited to see the results in hope of advancement.

Contact was made between the front two and Hirthler wasted no time putting the Green Lane/Wm. Penn Garage/Whitetail Disposal No. 4* first on the 23rd lap.

Lap and qualifying event sponsorships are available for the 51st Annual Freedom 76 set for September 18th. The winner will walk off with at least $30,000. For info contact Tina Rogers or Tommy Kramer at the track or telephone Ernie Saxton at 267.934.7286.

Next on the schedule is Saturday, August 21, 7:30 p.m. T.P.Trailers Modifieds, T.P.Truck Equipment Sportsman and 602 Mini-Series Sportsman – $18 for adults along with a Meet & Greet with Modified racer Darrin Schuyler and Sportsman racers Chris Esposito, Matt Clay and Logan Bauman

Saturday, August 28, 7:30 p.m. Modifieds, Sportsman and Outlaw Vintage Racers- $15 adults with youngster 11 and under free – Ron Kline will be part of the Meet & Greet with others to be announced.