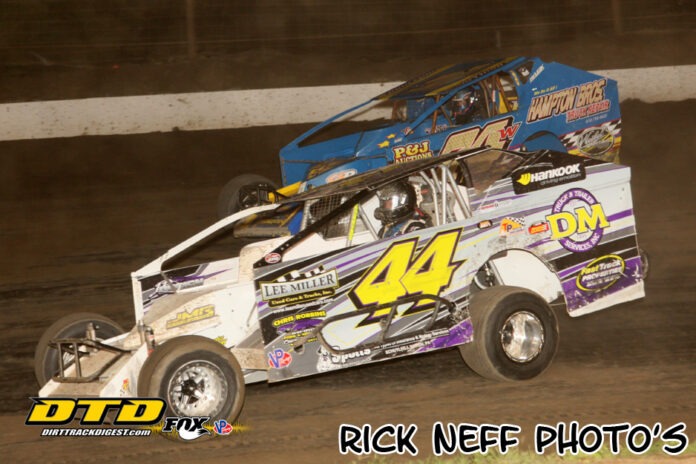 BECHTELSVILLE, PA – Rain was predicted in the area and the management did everything possible to keep the show moving to stay ahead of the forecast. Through everyone’s cooperation that was involved, the feat was accomplished. When the final checkered fell for the 602 Sportsman Crate feature it started to rain heavy.

Doug “The Handler” Manmiller ended his winless drought and put the Jason and Theresa Miller-owned No. 44 in victory lane ahead of runner-up Jeff Strunk for his first win of the season in over two years in the 30-lap NASCAR Advance Auto Parts Weekly Series T.P. Trailers Modified feature on Saturday night at Grandview Speedway. The last time Manmiller stood in the winner’s circle was on July 20, 2019.

Darrin Schuler took the early lead of the Modified feature and by the fifth lap a three-way battle for first ensured between Schuler, John Willman and Mike Lisowski leaving Nate Brinker, Erin Biehn and the other 28-car starting grid in pursuit.

A side-by-side battle between Schuler and Willman went on as the race progressed. Willman was finally able to clear him and became the new pacesetter on the sixth lap.

No sooner did Kressley overtake third, a huge pillar of smoke bellowed from the engine compartment coming off turn four bringing him to a stop in turn one for the first and only yellow on lap 15. Willman maintained the lead when action resumed, but by now Manmiller, Strunk, Mike Gular and Jack Butler joined the hunt.

The lead was exchanged for the third time when Manmiller took over the reins while Willman and Strunk jockeyed for second.

Strunk moved into second on lap 23 and took chase after Manmiller who had to deal with lap traffic. Manmiller’s encounter allowed Strunk to erase the margin he built up to pressure for the top spot.

Manmiller was determined to keep the competition behind and he did that as he pulled into victory lane for his 29th career win. Having a better finish this week as opposed to the Forrest Rogers Memorial was Strunk trailed by former point champion Gular, who ran there since his regular Saturday night track did not have the Modifieds scheduled; Willman, for his best run in a while and Duane Howard. Butler, Lisowski, Biehn, Schuler and Ryan Grim completed the top ten.

Dakota Kohler spun along the homestretch for the yellow with one lap in the books. On the restart the red was thrown when Rhoads spun in turn one and Joly did a slow roll over in the second turn. Joly was uninjured, but the car sustained considerable damage. Iatalese was still in first on the restart, but by this time Leiby was second trailed by Perry, Gilmore and Mike Schneck. Trying to break into the top five were Hoch and Kyle Smith.

With 16 laps completed, the battle for the lead was a five-way one between Iatalese, Leiby, Gilmore, Hoch and Kyle Smith.

While running third on the 17th lap coming off the fourth turn Gilmore made a daring move to pass Leiby and Iatalese and take over first.

Gilmore never looked back once he had control and went on to post his seventh career win in the division followed by Leiby, Hoch, Smith and Brian Hirthler. Rounding out the top ten were Iatalese, Schneck, Nathan Mohr, Mark Kemmerer and Kyle Lilick.

A multi-car backstretch accident brought out the yellow on the fifth lap. On the restart Dylan Swinehart charged into the top spot leaving Peet, Ryan Grim, Hoch and Cody Manmiller dicing for the remaining positions.

The red was thrown on the 14th lap when Leiby rolled in turn four. He was uninjured, but the car sustained heavy damage. It was still Swinehart in command on the restart, but now Hoch was second trying to take the lad way trailed by Grim, Peet, Manmiller and Richie Hitzler.

Positions behind Swinehart were swapped at times, but he never gave up the lead and went on to win back-to-back features. Finishing second was Hoch followed by Grim, Peet and Hitzler. Manmiller, Doug Snyder, Ryan Beltz, Wegner Jr. and Talan Carter were sixth through ten.

Saturday, August 28, 7:30 p.m. Modifieds, Sportsman and Outlaw Vintage Racers (Modifieds and Sportsman)- $15 for adults with youngsters 11 and under free – Ron Kline will be part of the Meet & Greet along with Cole Stangle and Vintage racers Scott Schaffer and Mike Stofflet. Outlaw Vintage Racers will have giveaways during the evening for kids including bikes, gift cards and more.

Lap and qualifying event sponsorships are available for the 51st Annual Freedom 76 set for September 18th. The winner will walk off with at least $30,000. For info contact Tina Rogers or Tommy Kramer at the track or telephone Ernie Saxton at 267.934.7286