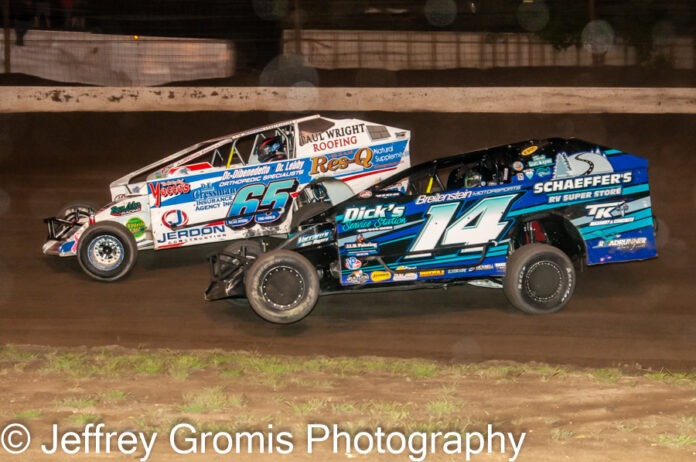 BECHTELSVILLE, PA – Brad Brightbill, the Grandview Speedway 2019 NASCAR Sportsman Point Champion that garnered 11 career wins in the division, took over the reins of driving the Breitenstein Motorsports No. 14 in the NASCAR Modified ranks. The team ran a limited schedule and had their share of unforeseen misfortunes.

Another driver struggling in the NASCAR Sportsman class is Cole Stangle, but he finally had a change of luck and was able to claim his first career win in the T.P. Truck Equipment 25-lap Sportsman feature.

Ron Haring Jr. led two laps of the Modified feature before Darrin Schuler spun in turn two for the yellow. On the restart Brightbill outgunned him and took over first.

Duane Howard, Kevin Hirthler and Bobby Gunther Walsh were eliminated from competition on the fourth lap caution after Gunther Walsh spun in turn two and the others were unable to avoid contact. Brightbill kept the pace on the restart with rad Grim, Haring Jr., Justin Grim and Eric Biehn in tow.

Positions were constantly changing behind Brightbill and at the conclusion of the Dan’s Deli ½ hoagie award second through fifth consisted of B. Grim, J. Grim, Manmiller, in an attempt to make it two-in-a-row, and Brett Kressley. Trying to break into the top five was Craig Von Dohren and he did when he worked his way up to fourth on lap 19.

Despite numerous cautions which is one thing a driver doesn’t want when they’re leading the race on a track surface to their liking, Brightbill kept the competition behind him, even though B. Grim made valiant efforts at times to pass him; to pull into the winner’s circle. Chasing him across were B. Grim, J. Grim, Von Dohren and Manmiller. Kressley, Jared Umbenhauer, Danny Bouc, Brad Arnold and Jeff Strunk rounded out the top ten.

Colton Perry was the leader of the Sportsman feature for two laps before Cody Manmiller was spun along the homestretch. When action continued, Bryan Rhoads was now in control. Kenny Bock was now in the runner-up spot using the outside lane to close the distance with Stangle now reeling in the top two.

Bock became the leader on the ninth lap restart caused when Nathan Mohr spun on the homestretch. Rhoads stayed with him however trying to regain the lead.

Lap 13 was a lucky one for Stangle as he got around Rhoads and Bock for the lead.

Battling for positions behind Stangle were Rhoads, Bock, Steve Young and Kyle Lilick with the order intact as the race progressed.

At the drop of the checkered Stangle was the victor followed by Bock, Rhoads, Young and Lilick. Sixth through tenth were Kyle Smith, Jimmy Leiby, Logan Bauman, Ryan Beltz and Kenny Gilmore.

Cody Manmiller, Perry and Hunter Iatalese were the heat winners while Matt Yoder won the consi.

Todd Lapp led from start to finish and was able to hold off the challenges of runner-up Andy Cassel for the triumph in the Outlaw Vintage Modified feature. Third went to Scott Schaeffer followed by Kevin Kuser and Bobby Hall.

In the Sportsman Vintage feature Bill Gerhart took the early lead and help that position until the red came out when Myron Haydt flipped in the third turn. When the race went green again Dissinger took the lead away and went on to win the event followed by Gerhart, Mike Garris Jr., Travis Jacobus and Jay Garris.

Next on the Saturday night schedule is another tripleheader show that features the American Racing Drivers Club midgets making their first appearance of the season. Midgets have always been known for excitement racing at Grandview and the Saturday, September 4th show which will also feature the T.P.Trailers NASCAR Modifieds and T.P.Truck Equipment Sportsman will be no different. A strong field of Midgets is expected including Steve Buckwalter, Steve Craig, Randy Mausteller, Eric Heydenreich, J.R.Booth and others.

Adding to the excitement is the fact that there are just two Saturday night shows remaining on the schedule that count toward the championships in the Modifieds and Sportsman. The battle for the titles is close in both divisions with Craig Von Dohren, looking for his 12th title, leading the Modified standings while Kenny Gilmore, searching for his first Sportsman championship, leading the standings.

Adult admission is $18 while youngsters 11 and under are admitted free.

Saturday, September 18 7 p.m. 51st Annual Freedom 76 for Modifieds paying $30,000 to win—Chapel service has been moved outside of main gate area starting at 2:45 p.m. BRING YOUR BLANKET OR CHAIR. Entry blanks for this event can be found at www.grandviewspeedway.com under the rules and forms section.

Lap and qualifying event sponsorships are available for the 51st Annual Freedom 76 set for September 18th. The winner will walk off with at least $30,000. For info contact Tina Rogers or Tommy Kramer at the track or telephone Ernie Saxton at 267.934.7286